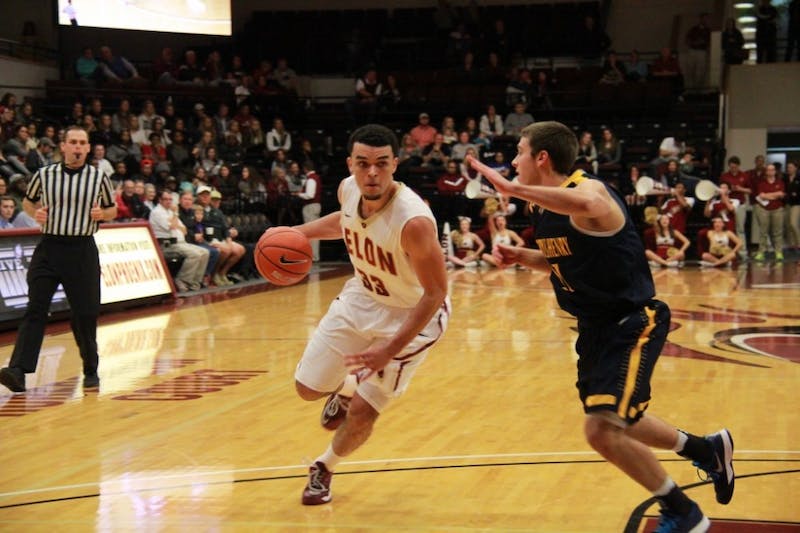 On the surface, the loss of four 1,000-point scorers would seem to provide the 2014-2015 edition of the Elon University men’s basketball team with a steep learning curve. But the players on the court aren’t the only difference for the Phoenix this season. 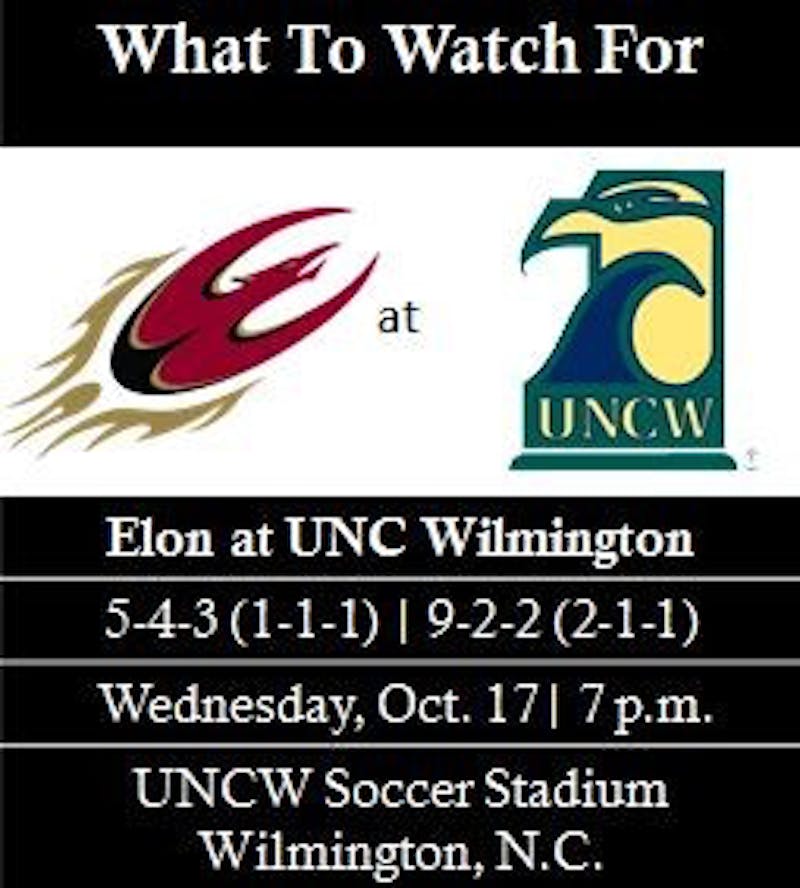 The Elon University men’s soccer team was in a hole. The Phoenix was without a win in its first two Colonial Athletic Association conference matches entering its home match against Northeastern University Saturday night, Oct. 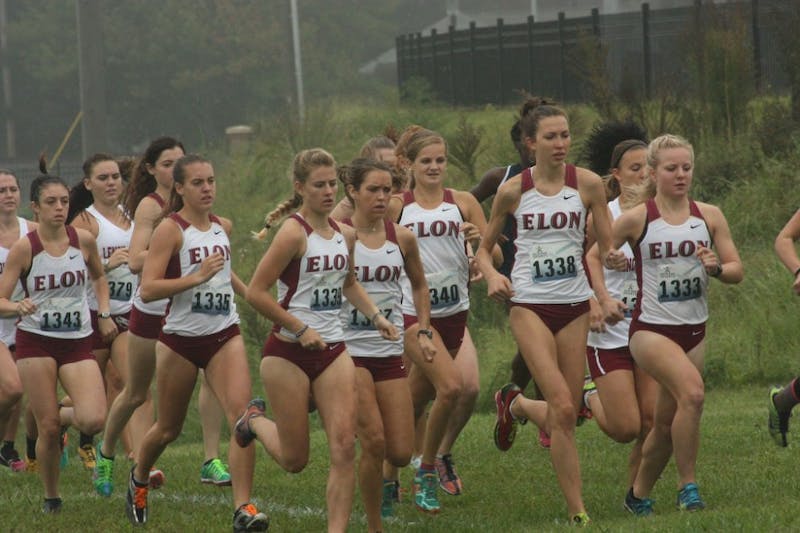 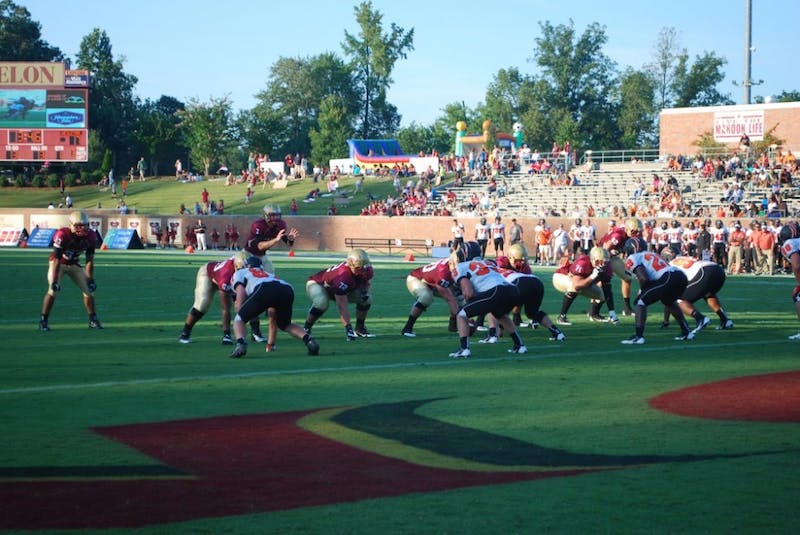 An Ode to the SoCon

Follow me to Cullowhee. High in the mountains, far from Elon’s fountains.  There’s no Zack’s Hot Dogs, but you’ll drive past some hogs. Home to Catamounts football, a disaster each fall.  Poor WCU, at least Elon couldn’t beat you.  A school in the valley, surrounded by a hill. Better scenery than a Burlington textile mill. Statesboro, Ga., we haven’t ignored ya.  Middle of nowhere, the Eagles’ lair.  Country folk abound, no phone service to be found.  Wanting a payday, GSU called a mayday.  An FBS conference would be better, they felt. So Southern headed off to the Sun Belt.  They brought along their friends from Boone. App State is moving up, despite last season’s swoon.  No more Elon visits to the Rock,  Or to see Chattanooga’s Moc.  Seven hours away in Tennessee bussed the Phoenix to UTC. Instead of facing chaos, Elon would rather play lacrosse. Furman plays this hot new sport. Upon a horse the Paladin did ride, but the Phoenix did not turn and hide.  Elon pulled the football upset, easing that pain of athletic debt. Nearby Furman lies the grounds of Wofford. We will miss the thrill Terriers games offered.  A frequent visitor to the Big Dance, the campus is filled with Khaki pants.  Down in Charleston lies The Citadel, Where football games are celebrated with cannon shell.  Basketball is a struggle at this military school,  Where a rifle is an essential tool. Samford is so far away, In the Central Time Zone do the Bulldogs play.  The trip there is quite the ride, down to the land of the Crimson Tide. It’s a shorter journey to the home of the Tourney, For at Greensboro Coliseum you can see, Wes Miller’s Spartans of UNCG.  It’s a neighborhood rivalry when these teams ball, Elon sees them at the mall. Wes has an empty trophy box, a far cry from that of the Silver Fox. It only takes one gas tank fill-up to reach the abode of Bob McKillop.  Davidson College is the league’s hub of knowledge.  A traditional rivalry, Elon-Davidson was the place to be. As we approach this historic day, An exit fee is left to pay, as Elon heads off to the CAA. Colonial Williamsburg is a new destination, Near Jamestown, the birthplace of our nation. Same with Drexel in the heart of Philly, January there could get chilly. Goodbye SoCon, we will miss you so, To greener pastures Elon must go.  CAA-ya later.

Three personal records were set by the Elon University women’s track and field team May 19 at the Wolfpack Last Chance Qualifier in Raleigh, N.C. Sophomore Sydney Griffin set a new record in the 100-meter hurdles with a time of 13.56.

In the final weekend of the regular season, a pair of school records were broken by the Elon women’s track and field team. 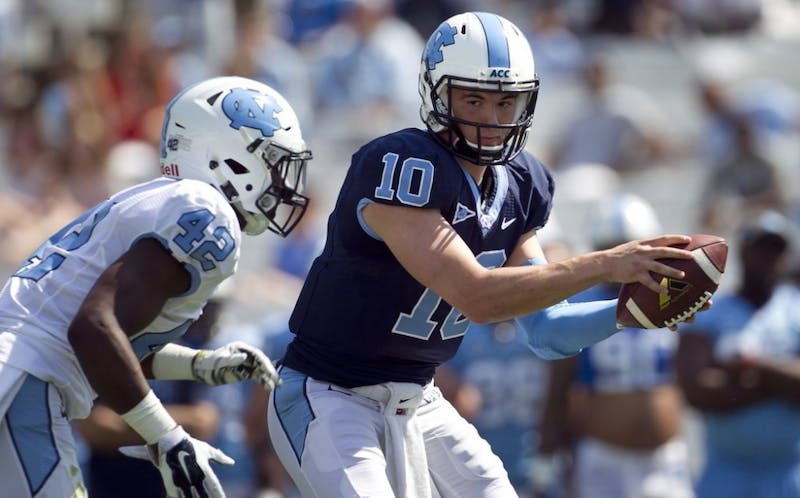 When academics are 'do or die,' sports take a back seat

This is an article about the NCAA and its treatment of student athletes. “Oh, no,” you say. “Here goes another person on their soap box.” Wrong.

Has spring football become too overblown?

Country singer Kenny Chesney was not the first to refer to football players as “the boys of fall.”  After all, the sport has been played from September-December for generations. 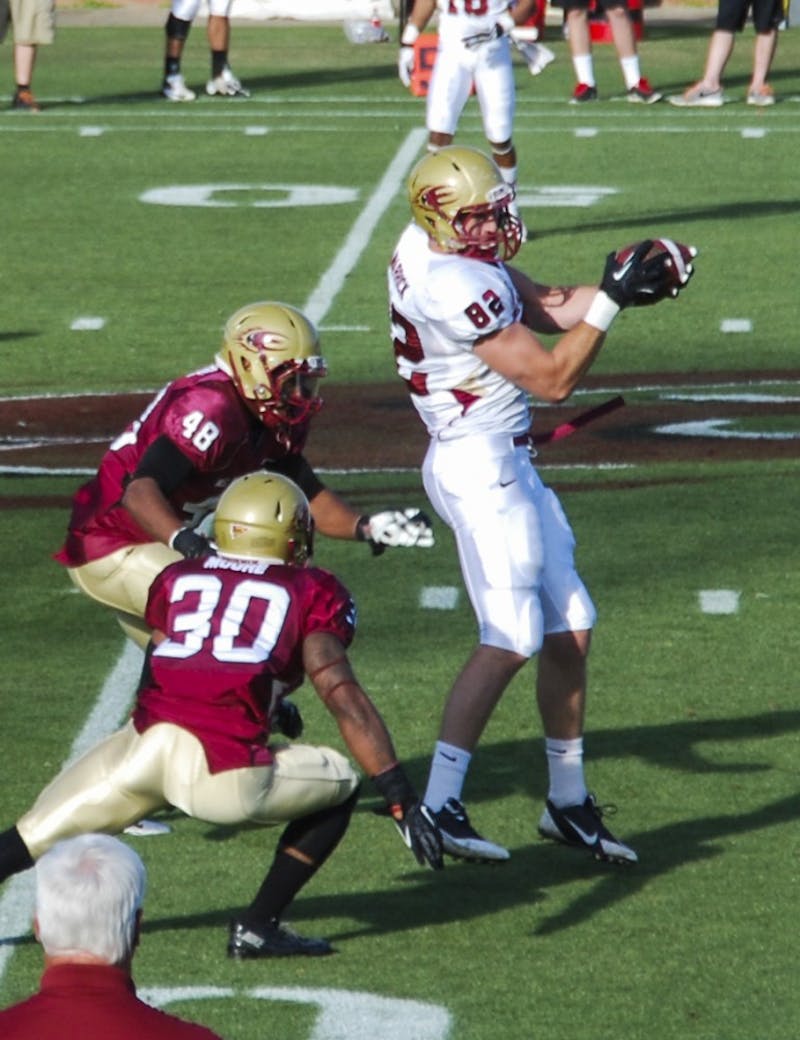 The scoreboard might have said “White 16, Maroon 7,” but for the Elon University football team, the annual spring game April 26 in Rhodes Stadium was a mile marker on the road to the 2014 season. 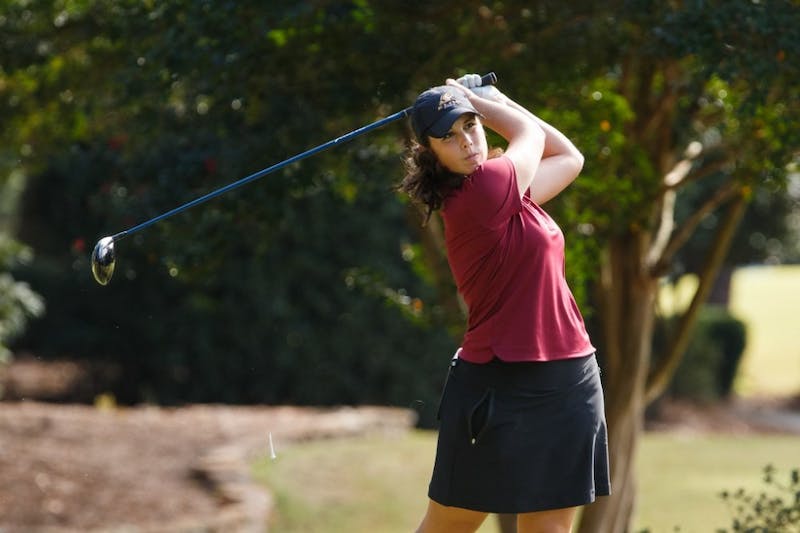 The 2013-14 Elon University golf season was defined by a sense of newness. For the men’s program, the season marked the first in 41 years without Bill Morningstar as head coach.

The Elon University women’s tennis team learned its destination and first round opponent for the upcoming NCAA Tournament April 29. 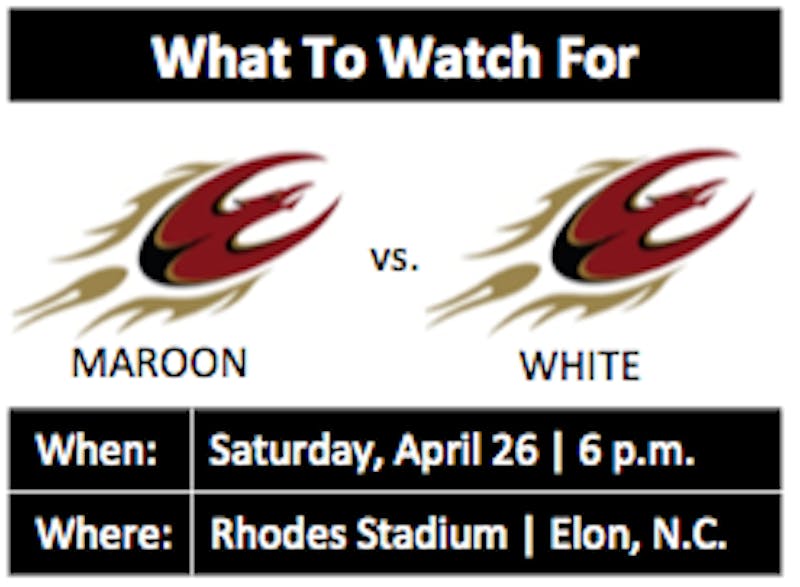 With the first set of spring practices under new head coach Rich Skrosky’s tenure winding down, the Elon University football team is preparing for its annual spring game. 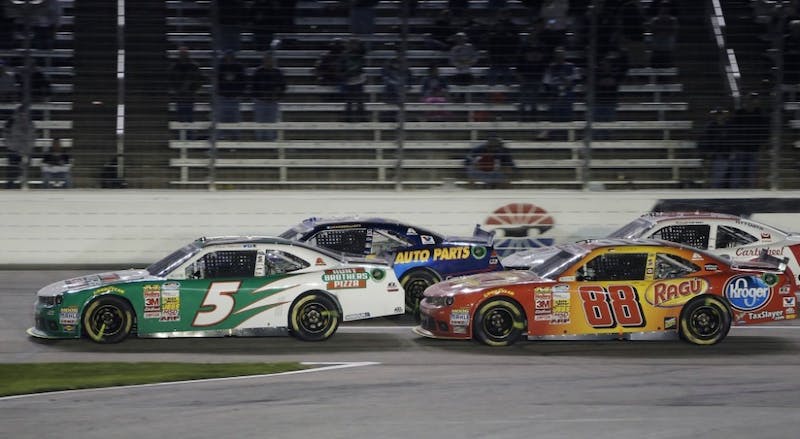 Do you know what channel Fox Sports 1 is on your television? Probably not. What about ESPN? That’s a little easier. Fox Sports 1 is the 24-hour all-sports network launched by Fox in August 2013.

Coming off of a second-place finish and individual win at the Coca-Cola Wofford Invitational, the Elon University men’s golf team fell flat with a ninth place finish out of ten teams at the Southern Conference Tournament in Pinehurst, N.C. 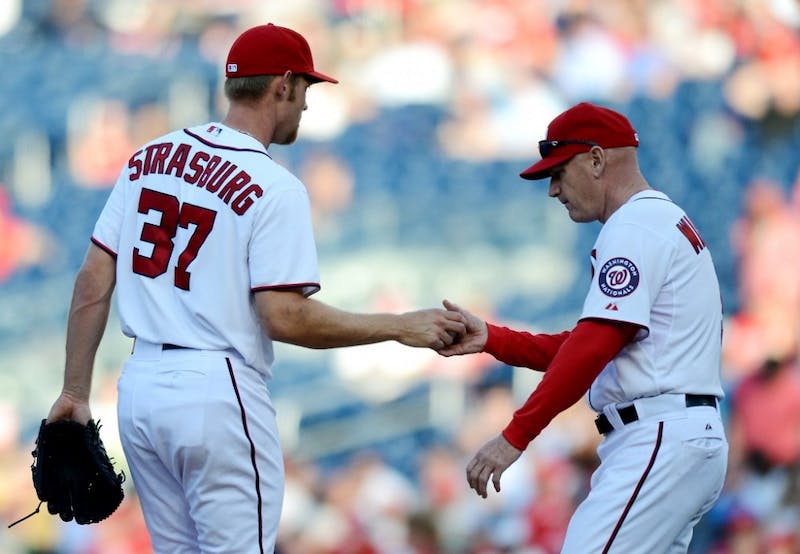 Is it 'Do or Die' time for the Washington Nationals?

What do you know? The Pendulum’s Assistant Sports Editor and resident Nationals expert is here to ponder why Washington is struggling to start the 2014 Major League Baseball season. After a year of massive disappointment in 2013, the expectations were sky-high for Washington in 2014 with new manager Matt Williams. 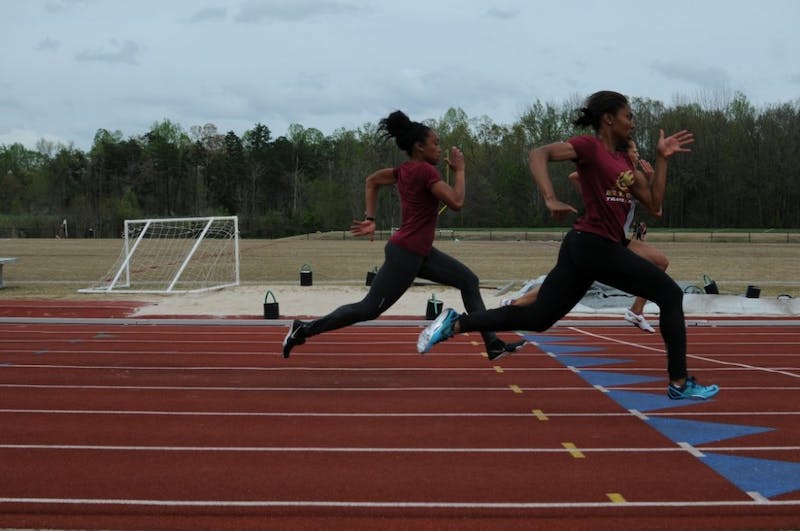 Aside from football, what Elon University athletic team has the greatest number of athletes? The answer might surprise you: women’s track and field. The track team, led by eight-year head coach Mark Elliston, is in the midst of the outdoor portion of its schedule, which runs from late March through May.