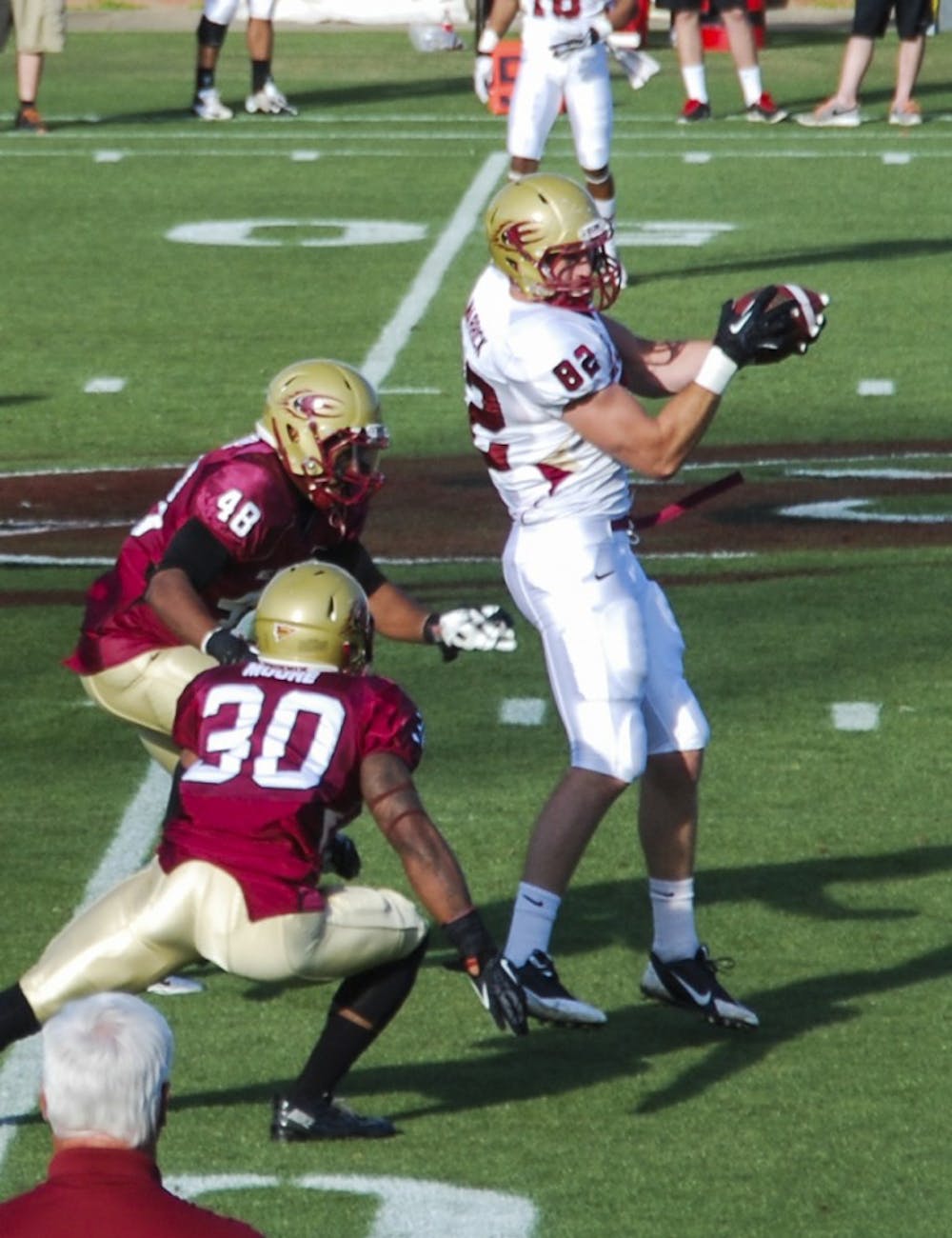 The scoreboard might have said “White 16, Maroon 7,” but for the Elon University football team, the annual spring game April 26 in Rhodes Stadium was a mile marker on the road to the 2014 season. Members of Elon’s defense forced four turnovers in the game, one in which the offense failed to score a touchdown.

“That’s the way it’s been the whole spring,” Elon head coach Rich Skrosky said. “The defense has the upper hand. That’s a byproduct of seeing the same thing 15 practices in a row.”

Skrosky emphasized that defense is a “reactionary side of the ball” and that he is not concerned by the defensive domination in the spring game. He said he was excited to see four turnovers forced because of the impact forcing turnovers has on a team’s ability to win.

“It’s by far the No. 1 factor in winning and losing games,” Skrosky said. “When you’re plus-one in the turnover ratio, you’re going to win 62 percent of the time. We work hard on that.”

Sophomore linebacker John Silas, who missed his true freshman season in 2012 with an injury, was one of the defensive players who shined on Saturday. With just over a minute and half remaining, Silas picked off senior quarterback Mike Quinn and rumbled 59 yards to the White team 16-yard line before Quinn dragged him down. Silas said he could have scored on the interception had he not turned around to check where the pursuing tacklers were.

Silas was quick to point out that the two sides of the ball for Elon are on equal footing coming out of spring practice.

“The first scrimmage we [forced] four turnovers. The second we had none,” Silas said. “It just keeps going back and forth, so that’s good. It means we’re even; no unit is better than the other.”

Junior linebacker Robert Davis recorded five tackles in the contest for the Maroon squad, and credits the ability to master the defensive system put in place by new defensive coordinator Jerry Petercuskie as a factor to his success.

“Learning the system was kind of hard, but once you get into it, you know it,” he said. “It’s fast-paced, but you’ve just got to get into your element. Hone your craft, that’s what we’re doing.”

For Skrosky, the time between the end of spring practice and the start of fall camp will be spent on just that — honing the skills of his players. Throughout spring practice, he preached mastery of the new systems and the new coaching styles of his staff. He said the team is now where he hoped they would be at this point in the year.

“We’re comfortable with the schemes on both sides of the ball,” Skrosky said. “On defense, we’re lining up correctly, and on offense, we’ve got the cadence of the offense. Now it’s about executing. We’re on track.”

There is still an open competition for arguably the most important position on the field: starting quarterback.

Quinn, the incumbent starter, was 18-for-32 in the spring game with 162 yards and an interception. Sophomore John Loughery went 13-for-27 for 86 yards in the game, though he was 7-for-12 early on when working with the White team. Skrosky said the competition is far from over, and there will be battles throughout the summer.

As for the supporting cast on offense, Skrosky anticipates all three of his top running backs — senior Karl Bostick, junior Tracey Coppedge and sophomore B.J. Bennett — will continue to see playing time. Bostick, who had 53 yards Saturday, was technically the leading rusher in the spring game, though 32 of his yards came on one carry for the White team.  Bennett carried the ball 10 times for 49 yards on the White team, and Coppedge, a member of the Maroon team, only had 13 yards on seven carries. According to Skrosky, the splitting of the teams throws off the running backs most because of the changes on the offensive line and the communication differences.

“That’s one of the negatives when you split the team,” Skrosky said. “The running game is the biggest consequence. It’s tough to get a rhythm.”

Redshirt freshman Demetrius Oliver capped off what Skrosky referred to as an up-and-down spring as the leading receiver in the game with eight catches for 52 yards.

“He’s got a ton of talent, but I’ve seen a lot of talented kids not perform,” Skrosky said. “We’re going to keep the foot on the pedal. Our expectations can’t be higher than his. Right now, that’s probably what it is.”

Now, with spring ball over, Skrosky and his team will keep working as the season opener Aug. 30 at Duke University approaches.

“There’s no days off,” Davis said.