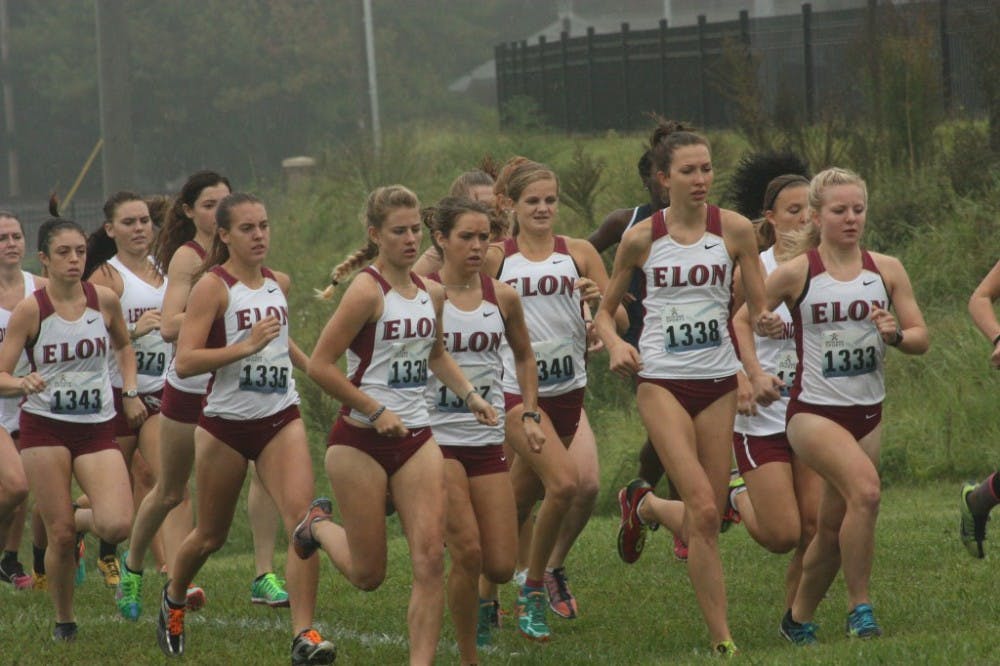 Both the Elon men's and women's cross country teams won the home meets they hosted: a dual against UNCG and the Elon Invitational. Photo courtesy of Elon Athletics.

Weaving throughout the South Campus intramural fields, the Elon University Cross Country Course is home to many Phoenix cross country practices. But the facility hosts more than just workouts.

On Sept. 13, Elon hosted the fifth annual Elon Invitational on the course. Both Elon teams took the team win at the event, with senior Jenny Gallagher taking the women’s individual title and senior Luis Vargas winning the men’s individual title. The four-team event followed a dual meet at home against the University of North Carolina at Greensboro Aug. 30.

Running at home provides numerous benefits for Elon, both on the course and off.  A significant aspect of the preparation for a cross country meet is familiarity with a course’s terrain and elevation changes. For Elon, that preparation is taken care of when running at home.

“We train on this course every day, so they’re familiar with it,” first-year head coach Nick Polk said. “They know every up and down on the course.”

According to the athletes, the setup of the Elon course is comparable in quality to courses they run on later in the season in more prestigious races.

“This one is a lot more grassy, and there’s a few rolling hills,” Gallagher said. “But it’s mostly flat. We like it as a course.”

A light rain was falling throughout the entire meet. This caused wet conditions throughout the course, including slick grass. Despite the weather challenge, the runners said they were pleased with the way the course held up.

“This grass is pretty short, so it’s not too sloshy,” Gallagher said.  She also pointed out that part of the course is a gravel path, which can easily withstand a weather-induced beating.

“We love the rain. It was nice that it wasn’t too muddy,” Vargas added.

Cross country athletes are quick to sing the praises of rain, because it makes for easier running conditions as long as the course holds up.

Not every meet can be at home, though.

College teams in every sport deal with travel concerns as they try to balance their schedules with athletics and academics. Travel often means missed class time and hours spent on buses or planes. With a home meet, all of those concerns are avoided.

“We didn’t have to stay in a hotel, lose a lot of sleep and class to [have the meet],” Polk said after the Elon Invitational. “We were able to get this in, and now we’ll focus on our travel schedule.”

On Saturday, Vargas claimed the win while his family from Angier, North Carolina was in attendance. Vargas won the event in 2013 and placed second in 2012, making it clear the impact competing at home has for him.

Many other families, alumni and faculty braved the weather to watch the meet.

“It’s really great to see faculty and parents and students come out to support us,” Gallagher said.

Wherever the season takes the Phoenix, the players appreciate the facility they are provided. The home course gives confidence and stability during meets and practices.

“Elon provides us with a great course,” Vargas said. “They take really good care of it, and we really are thankful for that.”