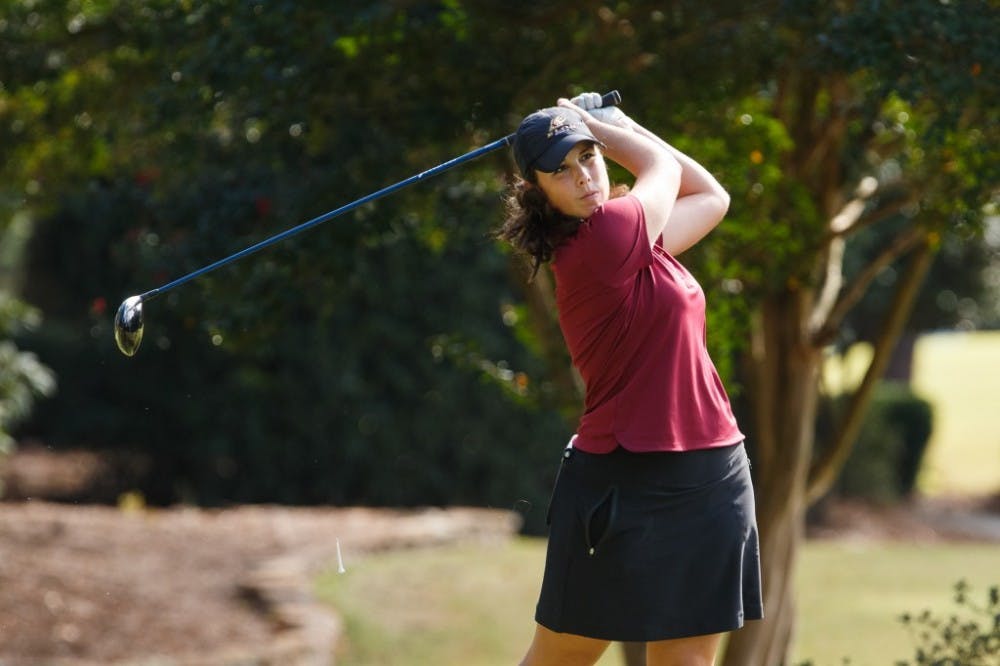 The 2013-14 Elon University golf season was defined by a sense of newness. For the men’s program, the season marked the first in 41 years without Bill Morningstar as head coach. Former University of South Carolina assistant coach Don Hill was called upon to fill the shoes of the 1964 Elon alumnus. The women’s program, on the other hand, saw a crop of new, young players as the primary contributors in winning a pair of tournaments. With the year of adjustment in the rearview mirror, both coaches said the future is bright for their programs.

On June 2, 2013, Hill finished coaching South Carolina in the NCAA Championship Tournament in Atlanta. Just a day later, he came to Elon to begin the process of succeeding Morningstar. After one year on the job, Hill has coached the Phoenix to six top-five finishes in its 10 tournaments along with improving national rankings by more than 30 spots. As much as Hill enjoyed seeing on-course success, creating the foundation for his tenure as coach was equally important.

Coming from a South Carolina program used to winning, Hill aimed to bring that tradition to Elon.

“A new set of expectations was the first thing I wanted to establish,” Hill said. “We’re not going to golf tournaments to take fun trips to Hilton Head and to Kiawah. We’re going there to win.”

Even though Elon did not win any tournaments in Hill’s first year, the Phoenix “played well enough to win three or four,” according to Hill. One of those tournaments was the Coca-Cola Wofford Invitational April 13-15. Elon broke numerous school and tournament records en route to carrying an 11-stroke lead over Lamar University into the final round.

The Cardinals shot 15 strokes below the Phoenix in the final round, but Elon senior John Somers still claimed individual honors. On the final hole coming off of a rain delay, Hill faced a dilemma. He could instruct Somers to be aggressive and try to win a team title, but instead allowed Somers to play conservative and preserve his individual win.

“John has waited so long and worked so hard to get an individual win,” Hill said. “The last thing I wanted to do was tell him to be aggressive. At the same time, I want my team to win. It was the highest of highs and the lowest of lows.”

Elon would follow up the strong showing at Wofford with a letdown, finishing ninth out of 10 teams at the Southern Conference Tournament.

“We just didn’t play the way we were capable of playing,” Hill said. “I’ve never met a golfer who wanted to shoot 78 or 80. You can’t get on their case. They wanted to play well.”

The men’s golf team will graduate six seniors this year but returns several contributors such as rising senior Will DiIanni and rising juniors Jonathan DiIanni and Troy Beaver. Hill said his focus has been on coaching that group to position Elon for further and greater success in the future.

The theme of the 2014 women’s golf spring season can be summarized in one word: youth.

Despite competing with two freshmen and three sophomores, the Phoenix was able to claim two team titles in their final four tournaments of the year. Head coach Chris Dockrill’s team claimed the team titles at the JMU/Eagle Landing Invitational March 14-16 and the UNCW Seahawk Classic April 4-6. For Dockrill, the wins were more about overcoming a mental roadblock than a physical one.

“This year we had three sophomores and two freshmen playing,” Dockrill said. “It was a goal to get them to win a tournament and realize they can win.”

One of those young players was freshman Kelsey Badmaev. Badmaev earned all-Southern Conference honors and an All-SoCon freshman team nod. She finished tied for 12th or higher in her final three tournaments and earned Southern Conference golfer of the week honors for the week of April 2.

“I felt really good coming into the season,” Badmaev said. “But [this success] was a really good surprise. I really enjoyed this season and had a lot of fun.”

She said the team was able to improve as the season went along, which led to increased success.

“Our team dynamic was really good,” Badmaev said. “Everyone got together and we all worked really well, our team dynamic is starting to click. Practices have been going well, and it led to the wins.”

Despite winning two tournaments, Dockrill said he was disappointed at his team’s fourth place finish at the Southern Conference Tournament in Hilton Head, S.C. The team battled adverse weather conditions and a challenging Moss Creek Golf Club, falling 30 strokes behind SoCon champion University of Tennessee at Chattanooga. Dockrill said Moss Creek is a course fit for experienced players, and much of this year was geared toward preparing his team for that challenge.

“We’ve had a really difficult time with that Moss Creek Golf Course,” Dockrill said. “You have to have multiple shots. Kids these days are very one-dimensional. Coaches teach them the perfect swing, where it’s very important for kids to have multiple shots on this golf course. That was one of my goals for this year, having the kids learn punch shots, low shots, high shots and work on all that this year.”

Despite the setback at the conference tournament, the future looks bright for Elon women’s golf. Not only will the current young group of players return to Elon in the fall with more experience and maturity, but the Phoenix will also welcome Heather Munro, a member of the Scottish national team, to campus to compete in the fall. Combine that with the move to the Colonial Athletic Association, where Elon will compete for championships, and Dockrill is confident setting lofty goals for the program.