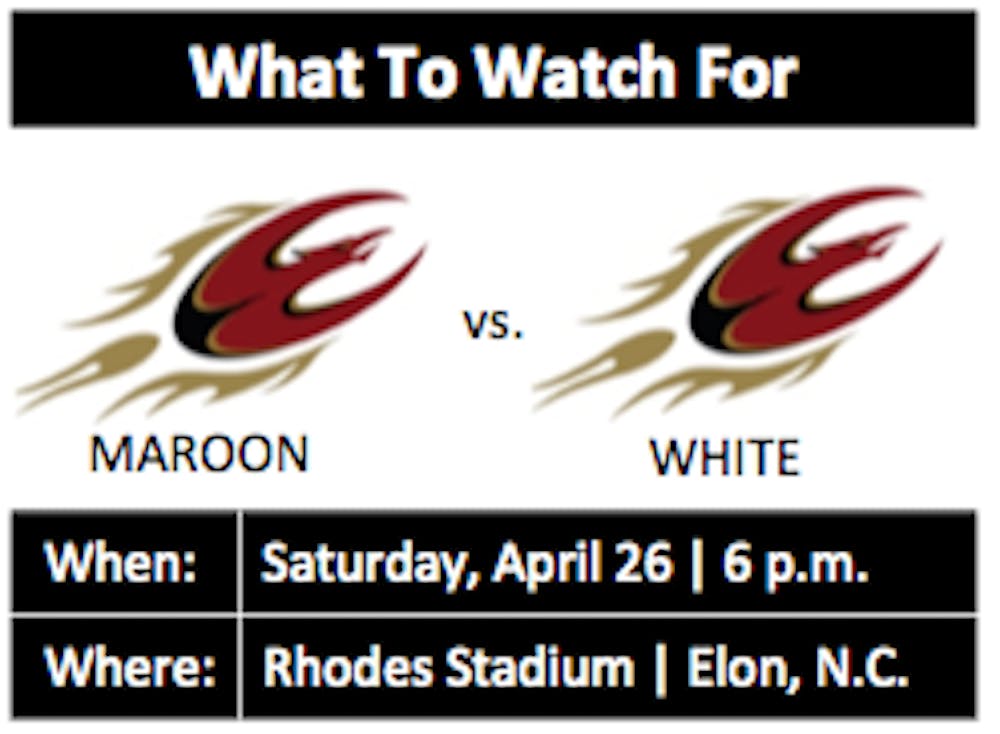 With the first set of spring practices under new head coach Rich Skrosky’s tenure winding down, the Elon University football team is preparing for its annual spring game. The contest, set for 6 p.m. Saturday April 26 inside of Rhodes Stadium will pit the maroon team against the white team to cap off the spring season.

For both the players and the coaching staff, the spring game presents a chance to apply what they have learned and practiced throughout the past month. As the month of April opened, the name of the game was adjustment. Players had to learn new terminology and the practice tendencies of their new staff, but after three weeks on the gridiron, that hurdle had been cleared.

“We started from the basics,” Elon senior linebacker Jonathan Spain said. “We were learning all the way up until spring ball, and it’s different looking at it on the whiteboard than playing on the field.”

Fellow senior Mike Quinn, Elon’s starting quarterback a year ago, is now in a fight for his job. Quinn is once again competing with sophomore John Loughery, whom he beat out for the starting role in 2013. Even though Quinn is the incumbent, he is fully aware of the competition.

“It’s definitely about even,” he said. “It’s going to come down to the spring game and I wouldn’t be surprised if it comes down to summer practices also.”

Quinn and Loughery will be in a unique situation in Saturday night’s game. When the rosters for the game were put together, Skrosky and his staff followed a specific process. One team will feature the first team offensive line, the other the first team defensive line. The skill players were then divided — “literally mixed and matched,” Skrosky said. In order to equalize the competition, each quarterback will get one half with each team.

This format is a change from last year, when offense and defense competed against each other with a scoring system devised by the coaching staff. For Quinn, the new format is a “back-to-the-future” situation. When Quinn was a high school senior in the spring of 2010, he came to Elon’s spring game with Skrosky as offensive coordinator and the format of the game was similar to the 2014 edition.

“I remember when I was a senior in high school when Coach Skrosky was recruiting me as the offensive coordinator, there were two different teams, not just offense and defense,” Quinn said. “It will be fun. It will be tough if we have a one matched on a two and vice versa. There will be big plays.”

Skrosky also added that there will be punts and point-after tries, but all punts will be dead-ball situations with only a punter, long snapper, and returner on the field.

Saturday’s “game” is actually the 15th of 15 NCAA-allowed spring practices, a concept that the Phoenix is well aware of.

“It’s not much different (than practice),” Spain said. “You try to practice like you play in games. I’m just going to try and attack it like I have these last 14 practices and do the best I can.”

Two previous scrimmages for the Phoenix have resulted in “inconsistency,” according to Skrosky. Despite these hiccups, Skrosky says his team is on schedule in terms of preparation for the fall season.

As much as Saturday’s spring game will be “just another day,” the players anticipate an atmosphere unlike other practices.

“We’re really counting on some students to be at the game,” Quinn said. “I know my parents are coming down and a lot of my teammates’ parents are coming, so I just want to show that we’re not a bunch of children out here, we’re grown men working to a common goal.”