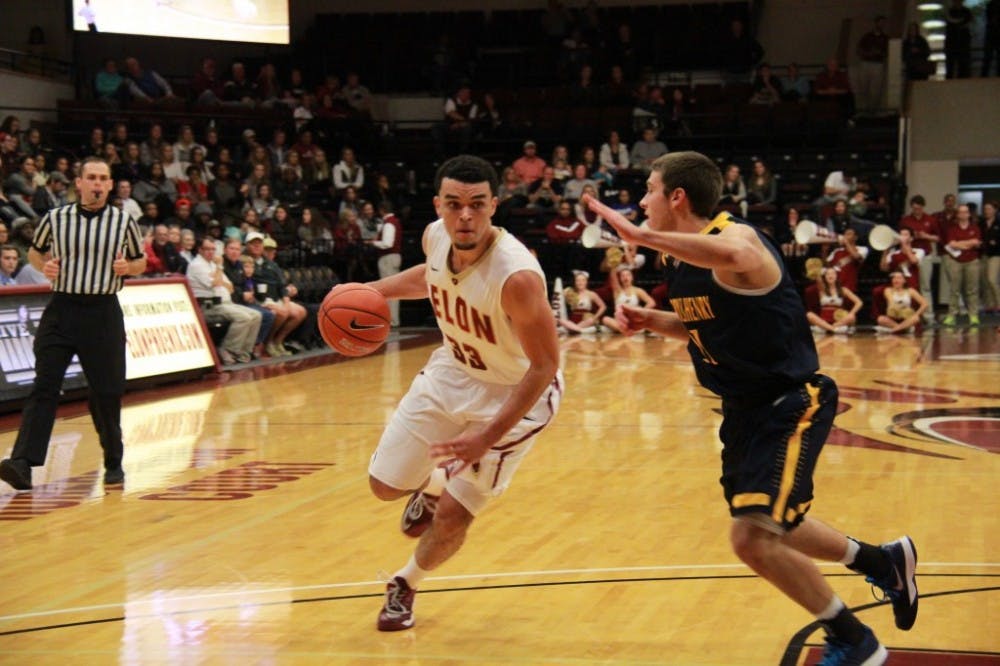 Freshman Elijah Bryant currently leads Elon in scoring with 13.3 points per game. He's been a key factor in leading the Phoenix to some close victories. File photo by Ashley King, Staff Photographer.

On the surface, the loss of four 1,000-point scorers would seem to provide the 2014-2015 edition of the Elon University men’s basketball team with a steep learning curve.

But the players on the court aren’t the only difference for the Phoenix this season. Through the first six games of the 2013-2014 campaign, Elon had lost a pair of one-point games, another by seven and a fourth that the Phoenix led with four minutes to play. The 2-4 start raised questions about a team which was picked to win the Southern Conference.

Now, a year later, Elon has two wins by two or fewer points, and sits at 4-3 heading into Sunday’s home game against Central Pennsylvania College. The two close triumphs, 74-73 over Morgan State University on Nov. 25 and 70-68 over Miami University on Nov. 30, have served another purpose for the team: increasing team maturity.

The young Elon team features three freshmen playing significant minutes each game along with a group of former role players adjusting to being starters. As would be expected with a new-look team, it takes time to gel.

Blake is one of 10 players averaging double-digit minutes through Elon’s first seven contests. Of those 10, only four reached that threshold a year ago. Three freshmen — guards Elijah Bryant and Dimitri Thompson and forward Jack Anton — are among that group.

Creating this new core has not been an easy task. A nonconference schedule that has included games against teams from Conference USA and a four-game road swing through Chicago, Cancun and Oxford, Ohio, has challenged Elon from the get-go.

On Nov. 22, the Phoenix played at Northwestern University of the Big Ten Conference. Despite leading by as much as 10 in the second half, Elon fell in overtime 68-67.

“Our energy was a factor in that game,” he said. “That energy comes from depth and we would not have depth if not for our first-year players being able to eat up those minutes.”

The momentum carried over to Elon’s game against Morgan State at the Cancun Challenge. In a 19-point second half hole, Elon rallied to win. While comparing this year’s team to last year’s might be like comparing apples to oranges, the deficit might have been insurmountable a season ago.

Bryant, the team’s leading scorer at 13.3 points per game, had a season-high 18 in the comeback.

“We’re a team that doesn’t fluctuate up and down,” Bryant said. “We’re steady the entire way. As you saw against Morgan State, when we were down 19 and came back.”

Five days later, Elon led Miami of Ohio by 10 points in the first half, but still found itself locked in a dogfight coming down the stretch. Earlier in the game, Anton and junior center Tony Sabato both suffered injuries and would not return. Despite the adversity, Elon found a way to earn the victory.

“Miami of Ohio could have gone either way,” Matheny said. “Tony went down, Jack Anton went down, backs against the wall, playing guys out of position. If we’d have lost a close game, it wouldn’t have been the end of the world, but now that you’ve won it, it’s a great thing and a great thing to build on.”

Now, with a 4-3 mark, Matheny emphasizes the best thing about his team’s start hasn’t necessarily been the victories.

“It’s such a fine line between finishing (and losing),” he said. “I like that we have good energy late in games and I do like the fact that we’re being pretty smart late in games. The best thing we’re doing is learning.”