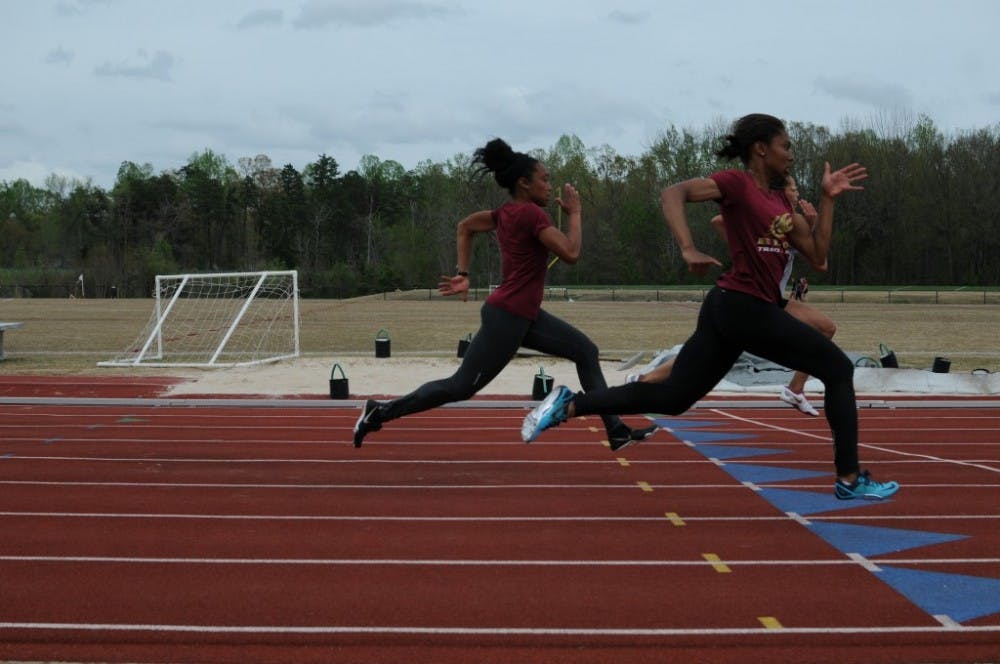 Aside from football, what Elon University athletic team has the greatest number of athletes?

The answer might surprise you: women’s track and field.

The track team, led by eight-year head coach Mark Elliston, is in the midst of the outdoor portion of its schedule, which runs from late March through May. This part of the schedule comprises the second half of the season, which began with the indoor season from January to early March.

Elon finished fifth overall in the meet with 88 points, a school record for points at the conference indoor meet.

“Indoor was a big boost for us,” Elliston said. “We had a lot of great performances at the conference meet.”

For Griffin, the hurdles win was her second straight SoCon indoor title. Her winning time of 8.60 was .05 seconds faster than the 8.65 she ran in 2013, capping off a season in which she doubted her ability to achieve success.

“I was struggling a bit because I was experimenting with my steps going to the first hurdle,” Griffin said. “There were some times where I thought, ‘This isn’t going to be a good year,’ but it all came through.”

To realize her goal of a second straight conference title, Griffin had to overcome nerves. Even though she had already run a personal-best 8.60 Feb. 17 at the Liberty Quad in Lynchburg, Va., she was nervous entering the 60-meter final at the SoCon meet.

“I’m always nervous,” Griffin said. “That’s one of my biggest battles. I remember waking up and saying, ‘Today’s the day,’ and I felt confident.”

Once the gun went off, adversity struck. Attempting to clear the second hurdle, she had a misstep, but was able to recover.

Griffin’s title followed Oram, who won the 3K event with a time of 9:34.37, which broke her own school record.

“Their talent is phenomenal,” Elliston said. “Once they can really train and work hard and get into some good competition, then they really do shine. We’ve got a pretty good core group of really solid athletes.”

Once the indoor season wrapped up, it was on to outdoor season. But a major obstacle stood in Elon’s way: the weather.

“When it’s freezing cold and you try to go outside and bundle up to run fast or jump, it just doesn’t work,” Elliston said.

“It’s not easy to run on the track when it’s covered in snow,” Griffin added.

The abnormally brutal winter weather that rolled through North Carolina wreaked havoc on the team’s preparation. The first outdoor meet of the year took place March 14-15, just a week after an ice storm coated Alamance County and left Elon without electricity in many of its buildings and student residences. In the meantime, the track team was forced to find alternate methods of training. The indoor venue at Wake Forest University is shared among local schools, so Elon was able to get some training time there.

“We’ve tried to get into the pool and the rec center, but it’s tough to train,” Elliston said. “It pushes us from training into exercise. Getting ready for Division I competition out in the cold weather just doesn’t work.”

Out in the fresh air

Rain, snow and ice didn’t stop the Phoenix. Elon finished second at the Seahawk Invitational, hosted by the University of North Carolina at Wilmington. That meet saw Griffin take first in the 100-meter dash with a time of 14.23.

Sophomore Jennifer Esposito was excited for the outdoor season to begin. Esposito finished fourth in the 100-meter dash at the UNCW meet with a time of 15.20 and won the 400-meter hurdles at 1:01.38.

“I love outdoors because they have the 400 hurdles,” Esposito said. “I was very excited to run that again because I didn’t run it last year because I was hurt, and there’s no 400 hurdles indoors.”

Two weeks later, Elon was unfazed by rain at the Raleigh Relays hosted by North Carolina State University. Griffin and Esposito broke school records in hurdles competition, with Griffin taking the 100-meter hurdles at 13.95 and Esposito clocking in at 1:00.57 in the 400-meter hurdles.

For Griffin, the feeling of setting the record took a while to set in.

“It was very overwhelming,” she said. “When I thought about it the day after, I thought, ‘Wow, that’s insane.’ I knew I could do it, it just took the right weather, it took the right amount of competitors, and there was good competition at the Raleigh Relays.”

Another Elon athlete who has found success is sophomore high jumper Megan Kirschling, who was named SoCon Field Athlete of the Week following her performance in Raleigh, where she cleared the bar at 5’7”.

Elon’s athletes know, with the SoCon Outdoor Championships coming up April 26-27 in Spartanburg. S.C., there is potential for the Phoenix.

“I would like to see us break into placing [in the top three] in conference,” Griffin said. “I know we can do it, and if we all stay healthy and driven we can even do more than that.”

Griffin said her dream is to qualify for the NCAA Championship meet, which will be held in June in Eugene, Ore. First, she would have to go through the NCAA regional meet in Jacksonville, Fla., May 29-31.

While Griffin longs for the chance to compete on the national stage, Elliston is focused on elevating his program, largely unknown on campus and in the community.  Elliston said the administration has already helped his program significantly, raising it from “under the radar” when he took over to its current state.

“We’re still the bottom of the totem pole, but we’re starting to get attention, and they realize what we’ve done,” he said.

Elliston said getting a new track facility constructed is a priority for him, as it will allow Elon to host meets on campus. Currently, the Irwin Belk track is only used for practice.

“It’s a good one, but it’s not good enough for meets and to get teams to come here,” Elliston said. He added that when Elon has the infrastructure, he wants to “put on a good meet where teams will come and then come back.”

In the meantime, Elliston will keep on recruiting. Thanks to the fact track and field is largely based on numerical results, Elliston is able to do a large majority of his recruiting online. His main goal is to get potential athletes out to Elon for a visit and sell the school and program then.

“Once they take a good look at Elon and see we’ve got good academics and a pretty good track team, they’ve got the best of both worlds,” Elliston said.

Griffin, one of these recruits, was receiving a great deal of attention from recruiters following a standout freshman season in high school, but injuries beset her in her sophomore and junior years.

“Elon was the only school that kept talking to me,” she said. “Coach Elliston would always check on me.”

Griffin returned to full health and set new personal records her senior year while holding her commitment to Elon.

Elliston also stresses academic success for his team, pointing out that the average team GPA for all 45 athletes is a 3.3.

“They’re not like the average student,” Elliston said. “They’re not able to stay up late or put that paper off because they’re working hard physically, and weekends they’re competing so they have to get their rest. That’s pretty impressive.”

Griffin and Esposito both have two more years of competing for Elon and will have a role in helping to bring the program further into the limelight — and possibly move up from the “bottom of the totem pole.”