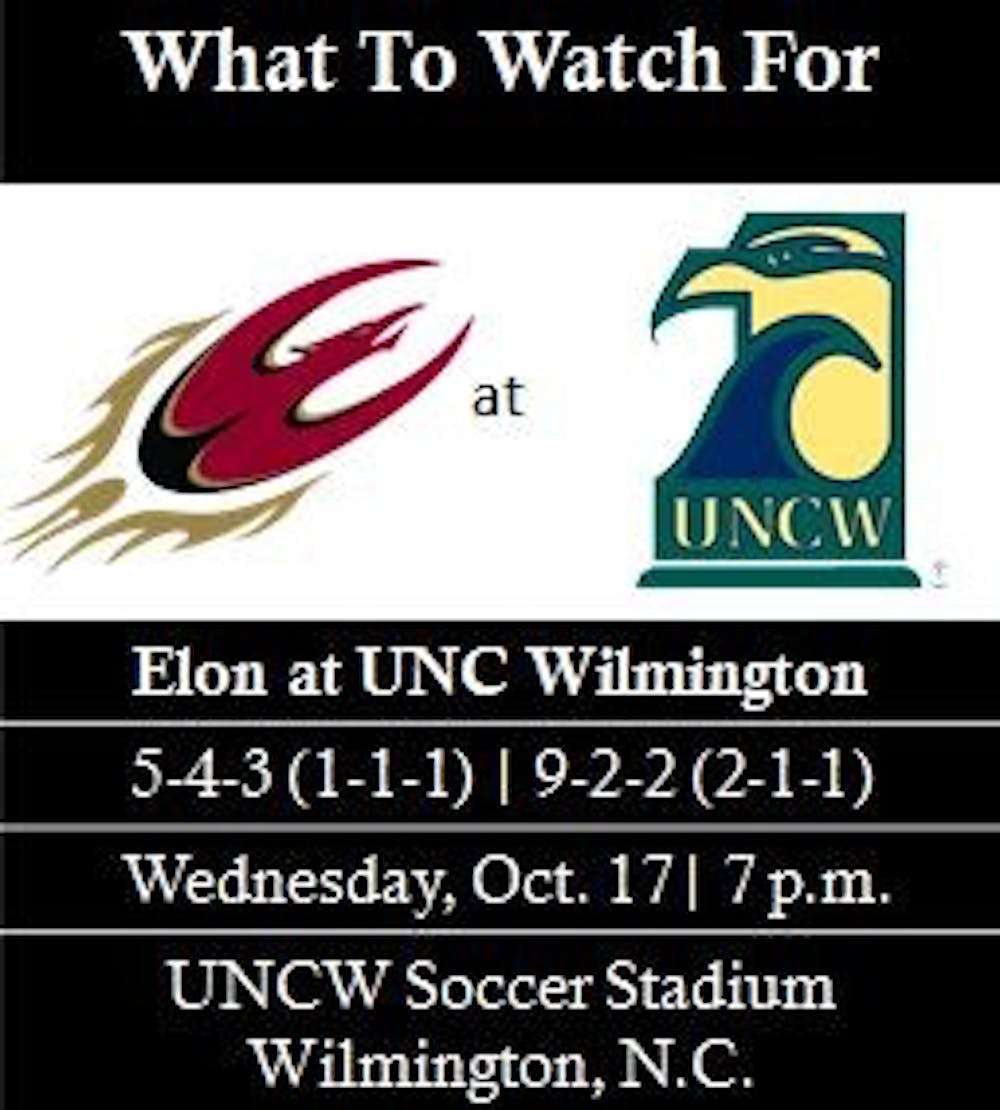 The Elon University men’s soccer team was in a hole.

The Phoenix was without a win in its first two Colonial Athletic Association conference matches entering its home match against Northeastern University Saturday night, Oct. 11. After 90 minutes of soccer, Elon was in a hole no more thanks to a 5-0 victory over the visiting Huskies at Rudd Field.

“This is a tough league so we were under some big pressure tonight,” Elon head coach Chris Little said. “We needed to get points on the board and the players knew that pressure. I’m glad we were able to win a tough game.”

With the victory, men’s soccer becomes the first team at Elon to win a conference game in the CAA, ending a fruitless stretch that lasted 14 events across men’s and women’s soccer, football and volleyball.

That was not the only history surrounding Saturday’s match, though. Senior goalkeeper Nathan Dean earned his 23rd career shutout for Elon, breaking the previous record held by Clint Irwin. Irwin is now the starting keeper for Major League Soccer’s Colorado Rapids.

“It’s something that I’ve been looking at early in the year and it’s something I’m really proud to have achieved,” Dean said. “I certainly felt like people were putting their body on the line for me at the end.”

“I’m so pleased for him,” Little said. “He’s been a wonderful asset to us at Elon. I know that’s something that he’s been aiming for and I’m delighted that’s off his back.”

Dean’s offense helped him out with the five-goal outburst, Elon’s highest goal output of the season and largest margin of victory since Sept. 11, 2011. Without a goal in conference play, Elon came out aggressively against Northeastern seeking to change that.

In the 16th minute, junior midfielder Caue Da Silva streaked down the right sideline and crossed a ball to junior midfielder James Brace, who was set up near the left post. Brace pushed the ball past Northeastern freshman goalkeeper Jonathan Thuresson and Elon was on the board. The Phoenix followed quickly in the 24th minute when senior forward Jason Waterman poked a ball past the Northeastern defense and right to Da Silva in front of the box. Da Silva scored on a one touch, doubling the lead.

Another goal followed in the 31st minute when freshman midfielder Luis Argudo launched a ball from 24 yards out from the top left corner of the box. Argudo found the top right corner of the goal and pushed Elon past the two-goal mark for the first time in 2014.

In the 54th minute, Waterman used his speed to blow past the defense on the right wing, where he received a pass from junior defenseman Nathan Diehl. Waterman fired the ball past Thuresson for his first goal of the season. The hero of last year’s Southern Conference championship and NCAA Tournament team, Waterman felt relieved to get the monkey off his back.

“It’s so relieving,” Waterman said. “The team set me up for it, our attitude coming into tonight was just awesome.”

A final goal scored with only six seconds left in the match when senior Eliot Browarsky headed a corner kick into the net. It was Browarsky’s first career goal.

“Everyone took a long look in the mirror and at our goals at the beginning of the season,” Waterman said. “There’s been a lot of talk and tonight it all came through and that’s what we want to be about.”

Elon will travel to the University of North Carolina at Wilmington on Wednesday for another conference match. Kickoff is at 7 p.m. from the UNCW Soccer Stadium.