Is it 'Do or Die' time for the Washington Nationals? 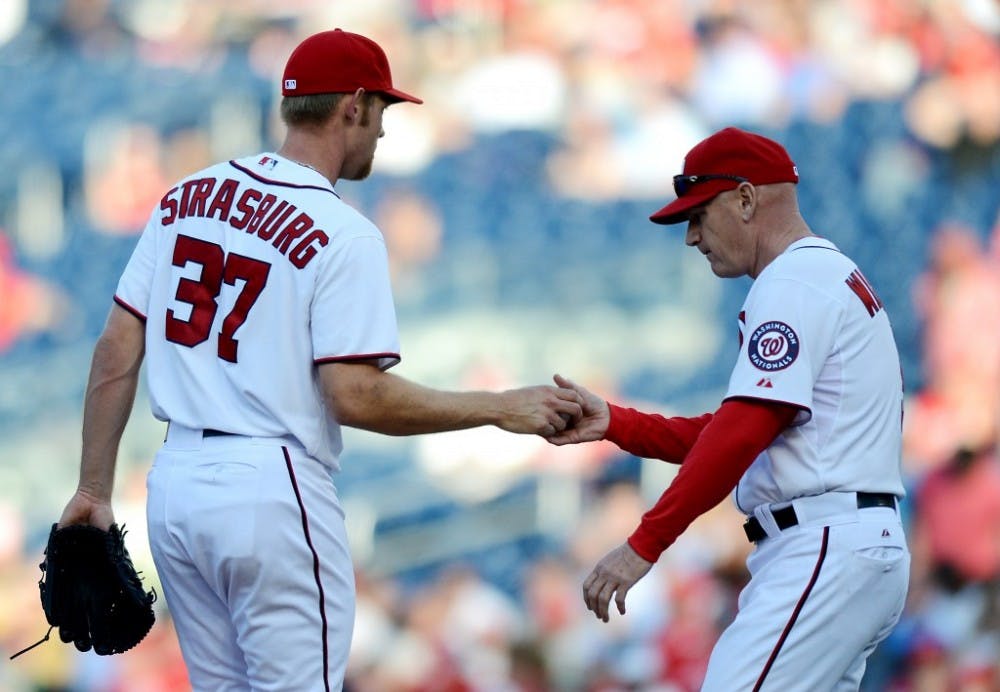 Washington Nationals starting pitcher Stephen Strasburg (37) hands the ball to Nationals manager Matt Williams (9), as he gets lifted from the game against the Miami Marlins in the seventh inning at Nationals Park in Washington, D.C., Thursday, April 10, 2014. The Nationals defeated the Marlins, 7-1. (Chuck Myers/MCT)

What do you know?

The Pendulum’s Assistant Sports Editor and resident Nationals expert is here to ponder why Washington is struggling to start the 2014 Major League Baseball season.

After a year of massive disappointment in 2013, the expectations were sky-high for Washington in 2014 with new manager Matt Williams. Nearly the entire roster was healthy for the beginning of the season, and a relatively weak National League East division paved the way for the Nationals to be considered favorites.

Then the season started. So did the injuries.

All of a sudden, the strong Nationals look vulnerable, and the results have shown it. In six games against the Atlanta Braves this season, the Nationals are 1-5 with three of the five losses coming by three runs or more. One of Washington’s strong points was supposed to be starting pitching. Now, not a single National starting pitcher has an ERA under 3.50. Staff ace Stephen Strasburg, that former once-in-a-lifetime prospect? His ERA is 6.00 with 14 runs surrendered in only 21 innings over four starts. His April 15 start against the Miami Marlins saw him give up six runs in only four innings. The normally reliable Jordan Zimmermann only lasted 1.2 innings in a start against Miami April 9. Gio Gonzalez coughed up six runs over six innings in Atlanta on April 13.

Washington is coming apart at its core. Adversity has arrived in bunches and the season is barely two weeks old. Matt Williams, as a new manager, now has the weight squarely on his shoulders. One of Washington’s strengths in 2012, the year the Nationals won the NL East, was the fact that the team fought through multiple player injuries to continually stay afloat. Williams will have to pull his team together and scratch out victories as the Nationals wait for full health and a consistent lineup. The problem is that scratching out victories is difficult when your starting pitching cannot keep the team in the game.

The Nationals conclude a six-game road trip tonight against the Marlins in Miami. The Nats will have to face the defending NL rookie of the year, pitcher Jose Fernandez, who starts for the Marlins. With a loss, the road trip becomes a 1-5 debacle.

Washington then returns home for 11 straight games against the St. Louis Cardinals, Los Angeles Angels of Anaheim and San Diego Padres. Perhaps coming home will be just what the doctor ordered for the Nats, and they will reel off a solid homestand. But if the strong Cardinals and Angels continue to rough up Washington pitching, the Nationals could find themselves in digging-out mode by the end of April. That is far from what the expectations called for in the Nation’s Capital this spring.

Is it possible for 11 games in April to be “do-or-die” games? With this team, it is. Stay tuned.