From hardships to the hardwood, take a look back at some of the top stories from this past school year 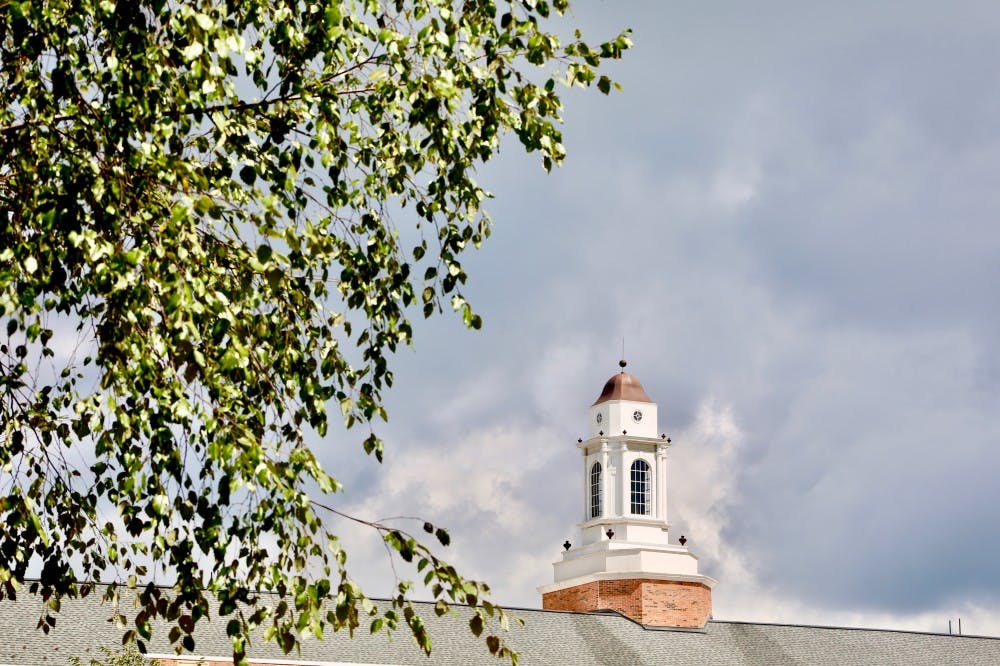 Photo by Alex Hager | Elon News Network
Despite some dark clouds blowing through, the Inman admissions building had a golden glow under the first sun on campus since Wednesday

After U.S. Immigration and Customs Enforcement raided a mobile trailer park on South Church Street in February, local residents in Alamance County were affected by the state's crackdown on illegal immigration. More than 200 targeted arrests occurred across North Carolina, including the trailer park raid.

The next day, Jessica, a student, walked into class at Hugh M. Cummings High School, located only a couple minutes away from the mobile home community. She said some of her friends were too scared to leave their homes and go to class the next day. Others were afraid to drive on the roads.

“There were a bunch of seats empty,” Jessica said about her classes.

Jessica, whose last name has been omitted for her family’s protection, is documented, but her parents aren’t. Her family owns a local business in Burlington, and they are active members of the community. Jessica lives with the fear that federal agents could deport her parents. The day after the raid, Jessica’s parents told her, “If we don’t come home tomorrow, don’t be scared.”

Going to class the day after the ICE arrests was hard for Jessica.

“It was distracting. Everybody was talking about it — ‘My aunt told me this, my uncle told me this, they streamed this on Facebook,’” Jessica said.

The goal of the union, faculty members say, would be to provide both fair wages and job security to all non-tenure-track faculty as well as push Elon’s administration to be more transparent in regard to salary and promotion decisions.

Since then, President Connie Book and other administrators have come out opposing the establishment of a union, ultimately resulting in a vote from adjunct, limited-term and visiting Elon University faculty members in February. They voted in favor of establishing a union at Elon. Of the 283 eligible voters, 112 voted for the union, and 68 voted against.

The university filed the objections with the National Labor Relations Board (NLRB) regarding the election practices of the Service Employees International Union, Workers United Southern Region (SEIU). In an email from Provost Steven House, the university rebuked the SEIU for what it viewed as aggressive outreach to potential union members and misrepresentations of the university's governance system.

Recently, the NLRB recommended that Elon University overrule an objection it filed against the SEIU-backed push for non-tenure-track faculty members to unionize at Elon. The university and SEIU have one week to respond to the recommendation.

The game felt like a changing of the guard in the CAA as the Phoenix traded even blows with the conference’s top dog, erasing the memory of the 31-3 loss they suffered to the Dukes last year.

The Phoenix defense held the high-powered JMU offense to two touchdowns and 419 yards while the offense pitched a strong performance. The game concluded with an up-tempo fourth-quarter touchdown drive captained by sophomore quarterback Davis Cheek and a game-sealing interception in the dying seconds of the game to cap off the program's most important win in Division I history.

For Connie Book, it’s always been about the process of becoming, not the actual event itself.

Sure, she ceremonially became Elon University’s ninth president, signified during her inauguration Oct. 18, 2018, when Ed Doherty, chair of the board of trustees, placed the gold Presidential Medallion on her neck.

Yes, she became the first female president in the institution’s history, shattering a glass ceiling that only took 129 years to break. But the process to become those things led her to this moment.

And she wants the process of leading this university to be a collaborative effort.

“The broader effort of ‘we’ versus ‘me,’ the firmer foundation of collective action and change, advancing a new model of teaching and learning that celebrates engagement and relationships as the essential ingredients,” Book said. “This is Elon. A community of courageous and determined educators, dedicated to liberating acts and always becoming better.”

On the first full day of fall break, rains and winds from Tropical Storm Michael wreaked havoc on Elon University. Alamance County declared a state of emergency and was under a slew of weather alerts, including a flash flood warning until 9:30 p.m. and a tornado watch until 9 p.m., according to the National Weather Service.

In an email to students, Vice President for Student Life Jon Dooley reported several downed trees on campus and urged those still in town to remain indoors.

"The combination of gusty winds and soggy ground conditions could contribute to additional downed trees," Dooley wrote. "Trees or branches that are downed near power lines can be extremely dangerous and should avoided. Roads in the area may also be affected by branches, flooding and power outages to traffic signals."

Dooley said there had been no substantial damage to campus facilities and no injuries were reported.

Elon University men’s basketball head coach Matt Matheny was fired on March 18, following an 11-21 (7-11 in CAA) season. Matheny coached 10 years for the Phoenix — five years in the Southern Conference and five years in the Colonial Athletic Association. Matheny leaves Elon with an overall record of 151-169. This came days after three players entered their names into the NCAA Transfer Portal with hopes to leave Elon.

Matheny suffered through five losing seasons during his tenure. This past season was Matheny’s worst record since his inaugural season as head coach when the team posted a record of 9-23 (5-13 in SoCon). Elon has only won one CAA Tournament game since joining the league in 2014-15 under Matheny, and this year the Phoenix fell to the University of North Carolina Wilmington — a team Elon had beaten twice already in the year.

Matheny ranks third all-time in wins at Elon, just 10 wins behind Graham “Doc” Mathis for second all-time. The Statesville, North Carolina, native had one 20-win season during his tenure — in 2012-13 when the team had arguably its most productive year under Matheny. In the 2012-13 season, Matheny coached the team to its only Division I postseason tournament when they made the CollegeInsider.com Postseason Tournament (CIT).

Residents of Alamance County have been working hard to fight against a potential pipeline extension that would run through much of their land and pose a threat to the environment around them. The extension of Mountain Valley Pipeline "Southgate" is set to be decided by 2020. Until then, community activism is set to continue.

MVP proposed its "Southgate" project in May 2018. The 73-mile extension would expand into southern Virginia and cross into central North Carolina in Rockingham County and end in Alamance County.

The pipeline will transport vast amounts of natural gas supply from the Marcellus and Utica shale production (located in New York, Pennsylvania, Ohio and West Virginia) to markets in the mid- and south-Atlantic regions of the United States, according to MVP.

Much of community concern derives from the notion that the pipeline extension would be a gas-fracking system. Fracking is a “drilling technology used for extracting oil, natural gas, geothermal energy or water from deep underground,” according to the Independent Petroleum Association of America.

The Elon University men’s tennis team faced off against No. 1-seed University of North Carolina Wilmington in the final round of the Colonial Athletic Association Tournament.

The Phoenix started off strong, taking the doubles point to give it an early lead. Sophomore Kyle Frankel and Ponce won first, followed by the senior team of Mario Paccini and Felipe Sarrasague, who would clinch the doubles portion and send both squads into the singles portion of the match.

The Phoenix fell to the University of Georgia Bulldogs 4-0 in the first round of the NCAA tournament in Chapel Hill on Friday, May 3.

On Monday, November 24, Elon University senior Kent Chance’s living room looked like any other college bachelor pad. Things were strewn about the room — stray beer glasses dotted the furniture; mismatched remotes shared space on a cooler serving as a makeshift coffee table. But it was all a bit more disheveled than usual after a break-in only a few days before.

Chance’s was one of five houses in Elon broken into during Thanksgiving break, according to the town of Elon Police Department. Victims say there were likely more. With students home for the holiday, many of the houses and apartments in the area around campus were left totally unoccupied for over a week. According to reports filed Nov. 24 and 25, thousands of dollars in valuables were lifted from student residences with TVs, video game consoles and prescription medication among the casualties.

“It’s just something you never think is going to happen to you,” Chance said.

Starting August 1, Elon University will finally appear as a search result on the Common Application’s menu amongst 23 other North Carolina colleges and universities.

In an email, Greg Zaiser, vice president of enrollment for Elon’s Office of Admissions, confirmed Elon’s decision to become affiliated with the Common Application. “We need to position the university for this change by being where students are looking for colleges, and because over 850 schools are members of the Common App, students are looking at colleges there,” Zaiser wrote. “Membership will help us naturally extend our national and growing international reputation.”