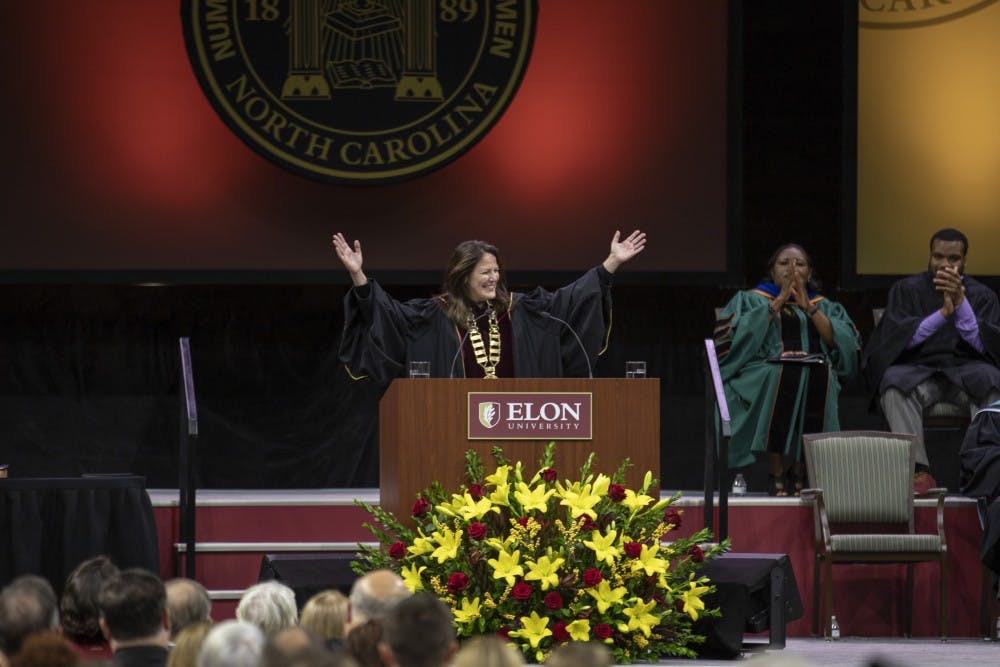 For Connie Book, it’s always been about the process of becoming, not the actual event itself.

Sure, she ceremonially became Elon University’s ninth president, signified during her inauguration Oct. 18 when Chair of the board of trustees Ed Doherty placed the gold Presidential Medallion on her neck.

Yes, she became the first female president in the institution’s history, shattering a glass ceiling that only took 129 years to break. But the process to become those things led her to this moment.

And she wants the process of leading this university to be a collaborative effort.

In 2015, Book experienced what she called a “Liberating Act.” Having spent 17 years at Elon, she left to join The Citadel, the Military College of South Carolina, as its provost. That university, where the student body is about 90 percent male, had never had a woman as its second-highest ranking leader. That presented Book with a problem.

On her first day at The Citadel, the university seamstress measured Book for her something she’d wear quite often for her new job — a 1954 Women’s Army Corps uniform. The skirt was too long and too loose, Book said. When she asked the seamstress supervisor, Eartha Brown, if she could alter it, Brown said, “no” immediately.

“She knew that if I reported to my new duties, particularly as the first woman in that role, wearing the general’s uniform incorrectly, my credibility would be diminished,” Book said in her inaugural address in the Schar Center on Thursday. “She didn’t want that for me, for her or The Citadel."

Book gained that credibility through a process, and she didn’t want to lose it over something so trivial. Her father started that process in 1970 when he loaded Book, her mother and her eight siblings into a station wagon for a 2,400-mile drive. The family left Opelousas, Louisiana, and went to Oregon State University so Book's father could earn his graduate degree, sparking her love for higher education.

It came at her time at Elon, when she rose from an assistant professor to an associate provost in less than two decades.

But now that she has that credibility, she’s charged with expanding it to the university she is now leading.

“I stand before you today as Elon’s ninth president,” Book said. “Our strength for tomorrow depends on each of us – our dedication and our talents in support of Elon’s future, and of our students’ futures.”

Focusing on the future is Book’s top priority, but she’ll lean on the past to do so. Every day, she’ll walk on President Emeritus Fred Young’s contributions, whose thoughtful land purchases paved the bricks and mortar for Elon’s modern campus.

As Book and her senior staff craft the next strategic plan, which will include building an engineering school and other academic initiatives, they’ll benefit from President Emeritus Leo Lambert’s drive to establish Elon as a nationally prestigious university.

While Elon develops more scholarships for diverse students — like the newly announced DeJoy-Wos Scholarship in the Odyssey program — it’ll be because of the late President Emeritus James Earl Danieley’s mission to admit the first African-American students.

“Presidents Danieley, Young and Lambert built this university on the foundation prepared by their predecessors and on the power of a committed community,” Book said. “At the college’s founding, President Long said Elon would be a college for the world, “firmly established in the hearts of the people.”

That’s been Elon’s character for decades, she said, and it’s something she wants to continue. Students, staff, faculty, trustees and donors all contribute to this community, and she doesn't want the praise solely focused on her.

University Historian George Troxler wrote in his book, "From a Grove of Oaks, The Story of Elon University," that Elon succeeds because its “commitment to community."

She said that realm of thinking sets Elon apart, and she plans to keep it that way.

“The broader effort of ‘we’ versus ‘me,’ the firmer foundation of collective action and change, advancing a new model of teaching and learning that celebrates engagement and relationships as the essential ingredients,” she said. “This is Elon. A community of courageous and determined educators, dedicated to liberating acts and always becoming better.”

There are so many things Book became, and more things she hopes Elon will become. But to her, it’s still about the process. And, from a ceremonial point of view, that process starts now.

“From this diversity of people, from all walks of life, the collective energy and inspired wisdom of our community will be our powerful guiding lights," Book said. "Elon, we are the people who will do the hard work with passion and compassion. Today, we boldly embrace Elon’s future, knowing there is no endpoint to this journey – each of us, always becoming. Elon, always becoming.”