Showers down trees and soak campus over Fall Break 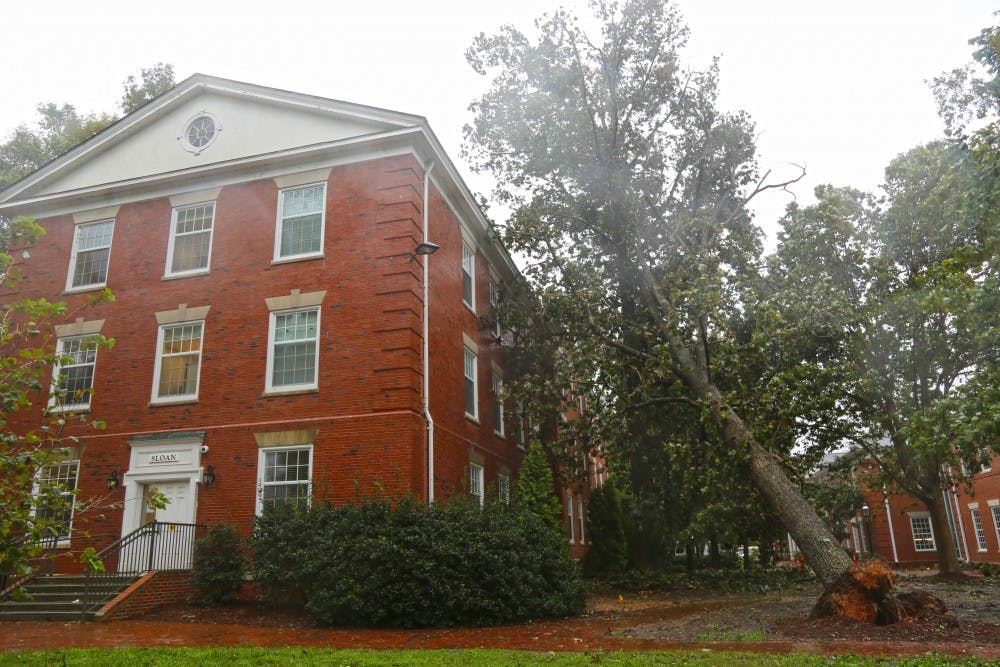 On the first full day of Fall Break, rains and winds from Tropical Storm Michael wreaked havoc on Elon University. Alamance County declared a state of emergency and was under a slew of weather alerts, including a flash flood warning until 9:30 p.m. and a tornado watch until 9 p.m., according to the National Weather Service.

Vice President for Student Life Jon Dooley, in an email to students, reported several downed trees on campus and urged those still in town to remain indoors.

"The combination of gusty winds and soggy ground conditions could contribute to additional downed trees," Dooley wrote. "Trees or branches that are downed near power lines can be extremely dangerous and should avoided. Roads in the area may also be affected by branches, flooding, and power outages to traffic signals."

Dooley said there had been no substantial damage to campus facilities and no injuries were reported.

According to Bob Shea, associate vice president for business, finance and technology at Elon, power was lost at the Station at Mill Point and all throughout South Campus. Internet access was also intermittent throughout the storm.

The most substantial damage came from fallen trees around campus. In Historic Neighborhood, a tree fell onto Sloan Residence Hall. In the Global Neighborhood, a tree fell onto two cars in the student section of the parking lot. And by McMichael Science Center, a downed oak blocked traffic along Haggard Avenue for roughly an hour before being cleared.

The town of Elon, which also declared a state of emergency on Thursday, announced its administrative offices would delay opening after falling limbs damaged the municipal building on Williamson Avenue.

"This is exactly what we thought was going to happen with Florence, but instead it happened with Michael," said Shea, who leads Elon's Emergency Operations Center. "It came fast and it went fast, but we expected Michael and were able to plan for it. "

According to Shea, Physical Plant moved quickly to sandbag buildings, clear gutters, unclog drains and dispose of downed trees. An outside organization was contracted to dispose of the trees too large for the Physical Plant staff to handle, such as the one that fell on Sloan Residence Hall. Overtime and contractor's fees will be the main costs for the university.

During Florence, Elon spent more than $100,000 on overtime payments for Physical Plant workers, but Shea is certain the effects from Michael won't cost nearly as much.

"We have less workers on campus and the only overtime will be the clean up tonight," Shea said.

Dan Sweet, a gardener for Elon, agreed that the effects of Michael hit campus harder than Hurricane Florence, which canceled classes for three days in September.

"Florence went around us, but this one has hit us a lot more," Sweet said. "We have been planning this for three days, so we have had a lot of meetings about how we are going to handle this storm."

Rainfall was especially pronounced Under the Oaks, where arborist Wendy Williams was clearing drains by hand on Thursday afternoon.

"Leaves are starting to fall, and with the water they float over and cover the drains," Williams said. "We want to keep the drains clear because we've had a lot of flooding issues and we are trying to prevent any more flooding."

But flooding wasn't the main concern for sophomore Monica Azua, whose Hyundai Sonata was one of two cars trapped underneath the fallen tree in the Global Neighborhood parking lot.

Azua stayed an extra day to go to the Greensboro Science Center with others from her residence hall and planned to leave campus tonight. Now, however, she'll be spending the weekend at Elon.

"I'm grateful because the damage doesn't seem as bad as the car next to it," Azua said. "My car just got a lot of scratches."

While her car might not have been wrecked, her plans for Fall Break certainly were. Azua will be missing her two younger sisters' dance performance on Saturday and her mother's 39th birthday party on Sunday.

"I called them to let them know, and they were just happy I'm OK," Azua said. "But it's sad I won't get to see my mom and be there for her birthday celebration."

Azua will be working with her insurance company for the next few days to try and fix the car she only just bought over the summer.

According to Shea, the university will not be assisting students in paying any repair costs for their vehicles. He urges students to work with their insurance companies and provide the proper documentation for the claims.

The National Weather Service reported 2½ inches of precipitation at Burlington-Alamance Regional Airport on Thursday, with almost all of the rain falling between 10 a.m. and 4 p.m. Wind gusts at the airport reached as high as 56 mph during the peak of the storm.

Nick Petro, warning coordination meteorologist for the Weather Forecast Office in Raleigh, said Thursday evening that his office issued severe thunderstorm warnings for the area to alert the community about wind gusts as well as potential flooding of lakes and rivers.

"It's really to raise awareness," he said. "We heard reports of widespread trees down, damage to structures, flooded roads and a whole mess out to the west. So this is one method that we use to raise awareness of the severity of the situation."