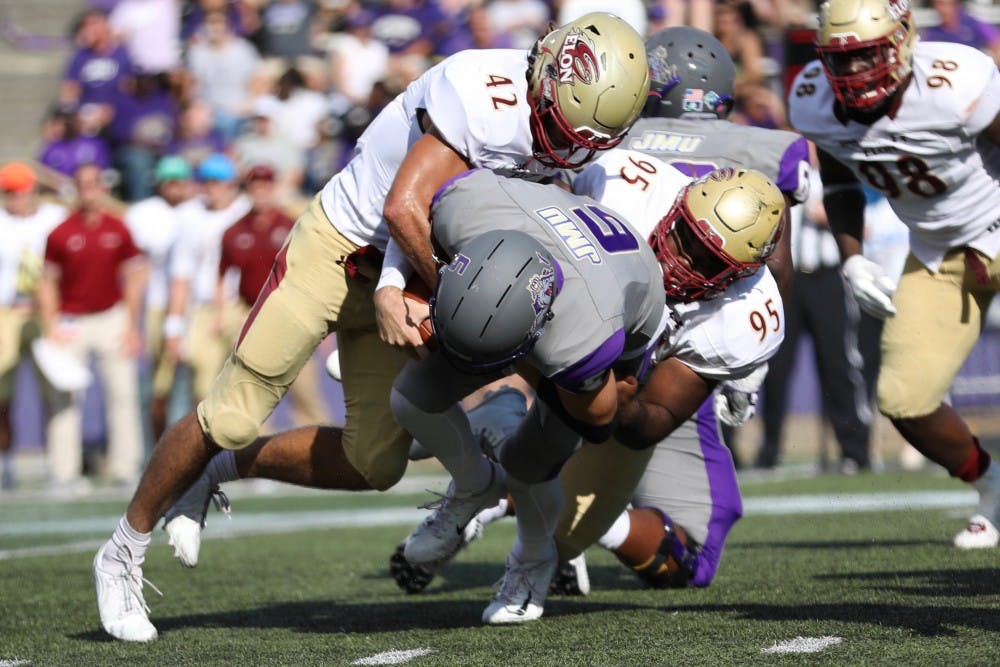 It’s hard to overstate how momentous Saturday’s win was for Elon. The Phoenix marched into Harrisonburg, sling and stone in hand, and toppled the FCS football Goliath that is James Madison University.

All of the stumbles, the mediocrity, the two-win seasons — all those autumns of uninspired football felt like a distant memory as the Phoenix reigned triumphant in Bridgeforth Stadium.

JMU has been a budding dynasty as of late, having won the conference for the past three years and making a trip to the Football Championship Subdivision National Championship for the past two. The Dukes have been a familiar face in the national rankings year in and year out. Their presence in the Colonial Athletic Association has elevated the conference to be considered among the nation’s best.

They hadn’t lost a conference game since 2015; that was until the Phoenix came to town.

A spunky sophomore quarterback, a second-year head coach and a little mojo were apparently enough to unseat the No. 2 team in the country and make headlines.

To say the odds were stacked against the Elon University football team wouldn’t even begin to do it justice. Some Vegas betting books had the Phoenix pegged as underdogs by a spread of 39.5 points. By flipping the script and winning, Elon can lay claim to the third-largest victory in the history of college football.

Every game at Rhodes Stadium plays out against a backdrop of Elon’s trademark red brick. The walls surrounding the field serve not only as an extension of the school’s Colonial Revival architectural aesthetic but also as a poignant reminder of the football team’s past success. Two banners boast, in bright red letters, Elon’s NAIA national championships in 1980 and 1981.

The 30-odd years separating those championships and the present day are practically a lifetime by Elon standards. Those titles came when the school looked nothing like it does now. They came when the sports teams played as the “Fightin’ Christians,” when they were in a conference with schools such as Catawba College and Mars Hill
University.

Since then, the school has morphed into a place that would be completely unrecognizable to an Elon student in the ’80s. Administrators and planners pushed the campus outward, strengthened academics and elevated the little brick-strewn utopia to national recognition. But as Elon has continued its breakneck ascension, the football team has largely struggled to keep up.

Sure, they finished with a national ranking in 1999. And yes, there was a playoff game in 2009. But the Phoenix’ performance since the turn of the millennium has been overwhelmingly unremarkable, and those championship banners from the ’80s seem to be a little more taunting as each year goes by.

When the team jumped up to Division I in the late ’90s, it began a new challenge. The team had barely begun to find its footing in the Southern Conference when it made another switch — this time into the formidable CAA. While the move may have helped the school raise its profile up and down the east coast, it didn’t do any favors for the football team.

For its first few years in the CAA, Elon was an absolute doormat. In its first season in the league, the Phoenix went 1-11, the lone win coming against a UNC at Charlotte team that had only come into existence the year prior. Through Elon’s first three years in the CAA, it went a dismal 4-20 in-conference.

More notably, the Phoenix have been consistently manhandled by JMU. In the years when Elon couldn’t keep its head above water in the CAA, the Dukes were reaching their prime.

In 2015, they came to Rhodes Stadium and kicked the Phoenix around to the tune of 51-0. In 2016, they rolled to a 49-point win. Even during Elon’s breakout season last year, the Dukes put up 31 points and held Elon to a field goal when the pair met up.

So when freshman wide receiver Avery Johnson hauled in a pass, put two feet in the zone, and sent the Phoenix three points ahead, it was an upset of unimaginable proportions. Even quantifying the win as the third-largest upset in college football history doesn’t quite dignify the years of toil in mediocrity that brought Elon to JMU’s doorstep.

When Elon won its first FCS game against Furman, it felt like it might be a fluke. When they won another against a ranked Charleston Southern, it looked like the luck lasted longer than a game. But then, six wins later, it was clear something special was happening.

Head coach Curt Cignetti stepped onto campus with few expectations about how he’d perform. He was brought in to replace a departure, and he didn’t have any head coaching experience at the Division I level. He won a national championship as a receivers coach under Nick Saban, and was Philip Rivers’ quarterback coach at North Carolina State University, but there was no indication that he would be able to turn things around for the Maroon and Gold.

His quarterback was a true freshman. The words “true freshman” don’t always carry the weight of what they really mean. Sophomore quarterback Davis Cheek was handed the keys to the program as an 18-year-old. He found himself at the helm of a Division I football team only two years after getting his driver’s license.

Maybe they practiced extra hard, maybe they watched endless hours of film, maybe it was a touch of magic. Whatever the recipe, Cignetti and the Elon Phoenix posted their best record in a decade and made their way to the playoffs.

When they got back on the field this fall, everyone was waiting to see if they could do it again.

Now, riding high off a program-defining win and a No. 5 ranking in the national poll, there’s no doubt that they are doing it again. The only question is how far they can go.

The way they’ve been winning this year, it’s hard to conceive what it might take to stop them.

Last year’s team, even with all of its breakout performances and jaw-dropping upsets, was far from convincing. Even when it toppled ranked opponents, it only did so by the skin of its teeth. Last year’s eight wins came by an average of less than four points. So many of those victories saw Elon almost squander early leads.

With so many nail-biting endings and nearly-blown leads, Elon walked a tightrope all season. So it was no surprise when they wobbled and fell off as soon they reached the playoffs.

But this season, there has been little late-game panic. There was even an honest-to-god blowout. And as if to punctuate the ascension to true dominance, it came against the same team that knocked them out of the playoffs last November.

That said, the rest of the road to the playoffs will certainly be one filled with hurdles. Three of the five remaining teams on the schedule are nationally ranked. The Phoenix may be flying high after what they did at JMU, but there’s plenty of time for them to get knocked back down.

Senior running back Malcolm Summers is absolutely explosive on the ground. The hamstring injury that sidelined him halfway through last season doesn’t seem to be slowing him down one bit. Cheek is hitting his targets and playing with the swagger of a senior. Every week, someone new shows up on defense and makes a name for themselves. With that kind of consistency, there is reason to believe that they can keep rolling.