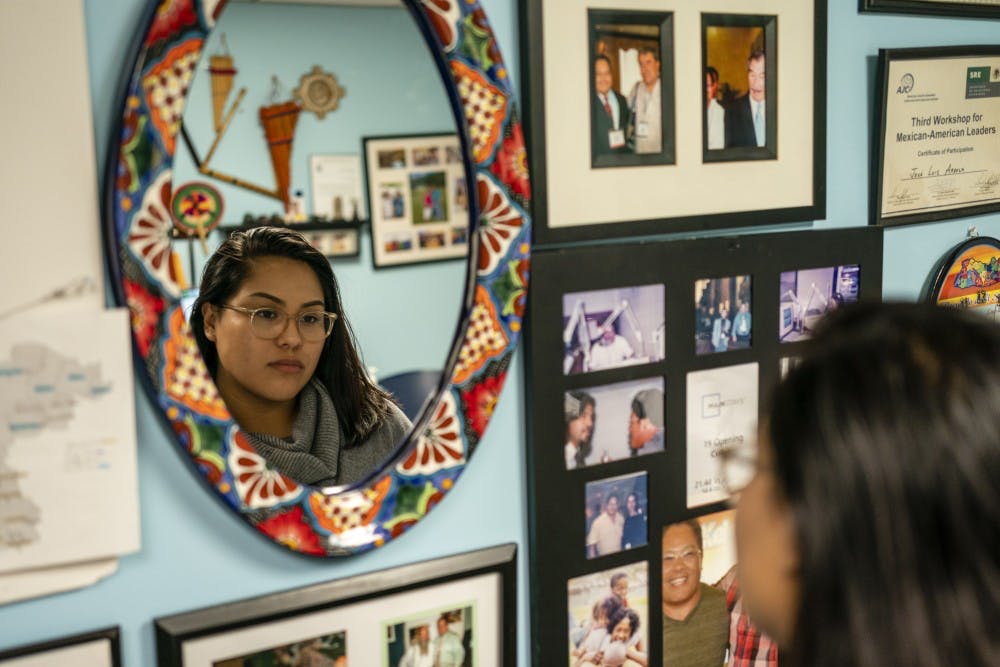 Jessica walked into class at Hugh M. Cummings High School the day after U.S. Immigration and Customs Enforcement raided a mobile trailer park on South Church Street. She said some of her friends were too scared to leave their homes and go to class the next day. Others were afraid to drive on the roads.

“There were a bunch of seats empty,” Jessica said about her classes.

Jessica, whose last name has been omitted for her family’s protection, is documented, but her parents aren’t. Her family owns a local business in Burlington, and they are active members of the community. Jessica lives with the fear that federal agents could deport her parents. The day after the raid, Jessica’s parents told her, “If we don’t come home tomorrow, don’t be scared.”

Going to class the day after the ICE arrests was hard for Jessica. According to U.S. World News and Report, 46 percent of CHS students are Hispanic. Ninety-two percent are minorities.

“It was distracting. Everybody was talking about it — ‘My aunt told me this, my uncle told me this, they streamed this on Facebook,’” Jessica said.

CHS is only a couple minutes away from the mobile home community where ICE arrested and detained people in a series of more than 200 “targeted arrests” across North Carolina.

Mihoshoty Yamaguchi, a math teacher at CHS, understood the fear students felt days after the arrests.

“Some of the students mentioned that the days following the ICE raids everyone was afraid to leave their house,” Yamaguchi said.

But Yamaguchi said she made it clear to her students that CHS was a safe place for them.

“In my classes, discussions have been minimal, but I know they were concerned,” Yamaguchi said. “As an educator, I am reminding the students that they are safe at school and that the staff is here to support them in any way they can.”

Jenny Faulkner, public information officer for Alamance-Burlington schools, said the ICE arrests have “come up as a current event in classrooms,” but the students had not come to the schools with any questions or concerns.

Yamaguchi and Jessica both stayed in tune with where ICE was in the county through social media. Siembra NC, an immigrants rights activist group, kept a heavy social media presence in the weeks following the arrests, offering text alerts and notifications of ICE’s locations. The organization used online forums to set up a 24-hour community watch to notify people about nearby ICE officers.

Turning to the community

Jessica read a Facebook post from Amy Arzola Muñoz, a paralegal in Chapel Hill who also works part time at her father’s accounting firm in Burlington. Her post listed vehicles that ICE agents were driving in the county that day and warned others of streets that agents had been traveling through. She received this information from a friend that was too afraid to publish it herself. Muñoz published it for her.

“It kind of went viral. Other people in the community also started to check these places out,” Muñoz said.

Muñoz's family immigrated to the U.S. from Mexico, and understanding the Latino community, Muñoz used social media as a tool to relieve some of the fears and uncertainties she and her family had. She said when raids happen, “you really don’t know what’s true and what’s not. So it’s really good that the community came together and were like, ‘We are going to keep up with this.’”

According to the most recent data from the U.S. Census Bureau, Hispanics make up 12.9 percent of the Alamance County population. Muñoz said “everyone was startled” in her community after the arrests. Some of Muñoz's family members are afraid to drive in the county because they fear being stopped by an ICE agent. The Hispanic-American Democrats of Alamance County posted on Facebook on Feb. 6 that they were offering rides to schools and drug stores for those too afraid to drive on the roads.

In a press conference in Charlotte on Feb. 8, ICE officials said they do not set up roadblocks. ICE regional director Sean Gallagher said, “That’s the furthest from the truth.”

ICE said they do not do “random or indiscriminate enforcement.” According to its numbers, 91 percent of people arrested are criminally convicted or have prior convictions.

Cox said if counties do not have an agreement to notify ICE about detained undocumented immigrants in county jails, then federal agents have to go into the communities themselves.

ICE mostly targeted areas in North Carolina that had discontinued their partnerships with ICE and had stopped notifying the federal government when immigrants were detained. This, Gallagher said, led to "criminals" being let go from county jails.

Burlington Mayor Ian Baltutis signed a letter along with six other mayors across the state condemning recent ICE raids. Baltutis and the mayors of Durham, Greensboro, Fayetteville, Asheville, Chapel Hill and Carrboro stood by the decision of the sheriffs in the counties to discontinue these “detainers.”

The mayors' letter said the raids have “struck terror in the hearts of many of our valued community members.”

During targeted arrests, according to Cox, agents have a list of names and search for specific people in the community. Cox also said agents who do make targeted arrests could end up detaining more immigrants than they anticipated.

“If ICE goes to a particular location seeking a particular target and other persons in violation of federal immigration law are also there, then this agency is not going to turn a blind eye to that,” Cox said.

And while ICE’s visibility has increased, Gallagher said the amount of arrests it's made has not.

“ICE officers have been continually demonized,” Gallagher said. He said the agents are doing their job as an extension of the federal government.

But the rhetoric behind these targeted enforcements has an effect on the documented people in the county as well as the undocumented. Though Jessica is documented, she still feels targeted as a Hispanic woman living in Alamance County — not just by ICE agents, but also by her sheriff, Terry Johnson.

“He has some idea that we are drug dealers, that we aren’t cool,” Jessica said about Terry Johnson. “Like right here, in Burlington, we get that a lot.”

Johnson said he treats every resident of Alamance County as equal.

“We have our Latino people coming in and reporting crimes,” Johnson said. “We don’t care if they are here legal or illegal. We answer calls to the residence ... They are victims of crimes, but we treat them just like any American citizen here.”

But Jessica said her community doesn’t feel the same. “We know he doesn’t like us,” she said. “It’s a straight-up fact.”

In January, Johnson requested $2.8 million in federal funding, approved by the all-white, all-Republican Alamance County Board of Commissioners to house ICE detainees. Johnson delivered an influential presentation where he said that undocumented immigrants are "raping our citizens.” Images like these are what he believed compelled the board to partially fund his request.

“In January 25th of 2019, Sheriff Johnson overwhelmingly failed the honesty test in stating the facts regarding who the criminals are in Alamance County,” said Rev. Curtis Gatewood, president of the Alamance NAACP. “Whether he used it as a metaphor or whether he used it literally, for our Alamance County sheriff to say for the people we are trying to hold here are criminal illegal immigrants who are actually — and he used the word 'actually' — raping our citizens in many, many ways. Shame.”

After the meeting, Gatewood exceeded his three-minute window for public comment, and the commissioners were not able to close their meeting. Gatewood was escorted out of the meeting and charged with a misdemeanor disruption of a public meeting, according to the Burlington Times-News.

Despite public backlash, Johnson sees it as his duty to protect “his citizens” from undocumented immigrants and takes personal offense with other sheriffs who deny partnerships with ICE. The oath a sheriff takes, according to Johnson, means they need to protect citizens from foreign and domestic harm.

Johnson and 18 other sheriffs were invited to join President Trump at the White House for a border security roundtable discussion about new policies on Feb. 11. Border security, according to Johnson, is not just an issue that stays at the border.  According to Johnson, undocumented immigrants come into the counties on highways and interstates, bringing with them drugs and human trafficking.

The federal government had to discontinue some of its programs with Johnson after 2007 when he was sued by the Department of Justice for profiling Latino-Americans at traffic stops. Elon News Network found in 2016 that from January 2009 to July 2012, Alamance County police was twice as likely to stop a Hispanic than a non-Hispanic. The DOJ dropped the lawsuit against Johnson, which he sees as a win.

Today, the effects of the lawsuit are still felt by those both documented and undocumented. Elon junior Mackenzie Martinez, event coordinator for the Latinx Hispanic Union, identifies as a “Chicana,” a female of Mexican descent. And though she is from Seattle, Washington, she still always checks for her license every time she drives in Alamance County.

“It’s pretty frightening. When I drive, I am always very wary of cops and whatnot,” Martinez said. “Just because the initial profile of a Latinx is, ‘Oh, an illegal!’”

The 2-year-old organization Immigrant Realities focuses on opening up conversations about immigration on Elon’s campus. David Duncan, a founding member of the organization, sees the “trickle-down” effect of how national policies affect the state.

"When you are in the community and you are a part of it, you aren't like,'Let's commit fraud,' it's like, 'Let's do what we need to do.'"

“If you are Hispanic, you are at threat of being racially profiled by the police,” Duncan said.

Duncan also believes ICE is using the recent arrest of rapper 21 Savage as a distraction.

“This doesn’t just affect celebrities; this affects normal people,” Duncan said. “It’s really been a method of terrorism to scare people to stay in their homes.”

Muñoz works with family law. She said she had always wanted to work with immigration law, but as she got older, she learned she was too emotionally attached to the practice. Though she does work for a law firm and is documented herself, she understands why immigrants go to work and stay in the country without the proper paperwork.

“When you are in the community and you are a part of it, you aren't like, ‘Let’s commit fraud,’ it’s like, 'Let’s do what we need to do,'” Muñoz said.

"It's just sad, families and families are being torn apart," Jessica said. But ICE is proud of their work over the past couple weeks and sees these arrests as a success.

"This agency will continue to carry out its mission," Gallagher said. "ICE is here to protect them, and if they knew the types of individuals — and I don't care where you are, whether you support ICE's mission or not — there is nobody that wants to live next to a sex offender, somebody charged with rape, a gang member or a violent felon."