Elon is set to join the Common Application 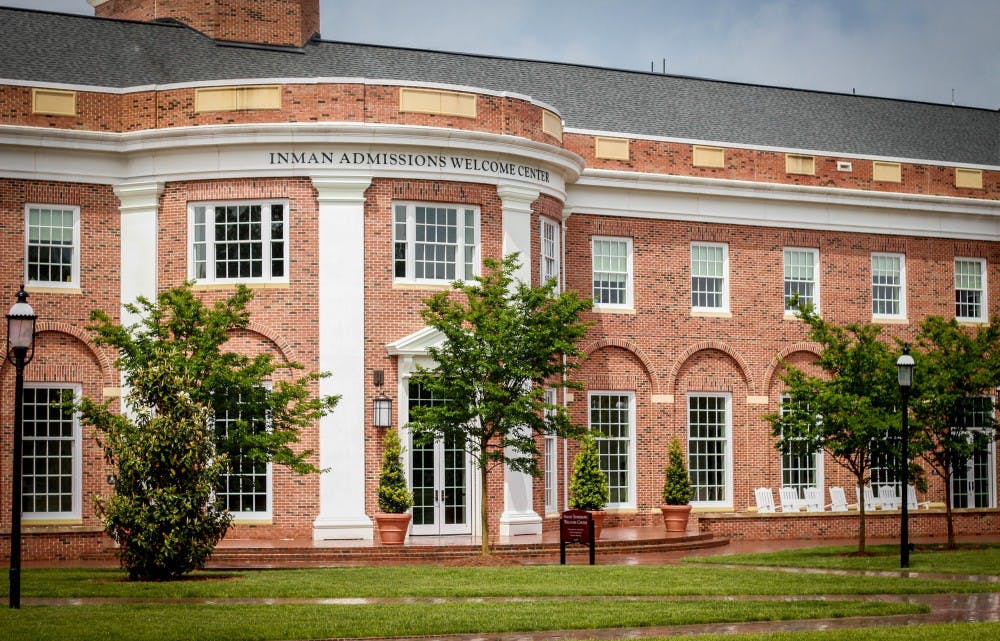 Elon will join more than 850 domestic and international colleges and universities affiliated with the Common Application.

“It’s more of a, ‘If I get accepted and I’m still thinking about going, then I’ll visit,’ and I’m looking at mostly out-of-state schools other than the University of Kansas,” Sharp said.

Sharp has lived in Wichita, Kansas, for most of her life. Though she is considering her in-state school options, she will be one of the thousands of prospective students applying to Elon during the 2019-2020 academic year.

Starting August 1, Elon will finally appear as a search result on the Common Application’s menu for North Carolina universities.

The Common Application, a college application service founded in 1975 that includes more than 800 colleges across the United States and 36 international universities, will be Sharp’s preferred method of applying to most of her schools. The service’s design provides prospective students with a universal space to apply to a multitude of college and submit personal essays and background information, including test scores and grades, extracurricular activities and faculty recommendations.

While Sharp does not think Elon’s traditional separate application would have affected her decision to consider Elon as one of her possible schools, she acknowledged that applying to Elon will be easier from the Common App’s dropdown search menu rather than a separate website.

“I think it’ll be less stressful using the Common App because it’s one application for different schools,” Sharp said. “I won’t have to fill out a separate application for each school that I’m applying to, which will make it easier in the long run.”

While the Common App has not officially confirmed all the schools in the 2019-2020 year’s class, Elon has decided to become a member of the Common App for the upcoming application season.

In an email, Greg Zaiser, vice president of enrollment for Elon’s Office of Admissions, confirmed Elon’s decision to become affiliated with the Common Application. Zaiser declined to interview in person with Elon News Network.

“We need to position the university for this change by being where students are looking for colleges, and because over 850 schools are members of the Common App, students are looking at colleges there,” Zaiser wrote. “Membership will help us naturally extend our national and growing international reputation.”

As a result, the decision to become a Common App member signifies a shift toward a more diverse student body.

Several universities have reported that the Common App plays a factor in expanding the number of applications received, regardless of where they are from.

Alexis Pope, director of admissions at Appalachian State University, theorized that their out-of-state applications would increase after announcing to go live with the Common App last August. To his surprise, he discovered there was a greater number of in-state applicants despite using the College Foundation of North Carolina, an application system typically reserved for in-state prospective students.

“Going live in Common App was an improvement,” Pope said.

In addition, Appalachian State saw an increase of rural applicants and Pell Grant recipients, according to Pope. Through streamlining the process of applications, Pope said he was able to focus more on working with prospective students.

“[The Common App] was made to be more in front of the student,” Pope said.

While admissions procedures for Appalachian State were simplified with the Common App, high schools are still adjusting to effectively incorporate the Common App into all application operations.

Since the Common App requires all aspects of a student’s application to go through its own online service, Harrington finds himself having to upload the final transcripts separately in addition to having them sent by a separate transcript specialist in the Grimsley guidance department.

“What they’re really referring to is the final transcript, and I don’t know how other schools handle it based on the way it reads to me,” Harrington said. “There’s a sense where we’re kind of doing double work.”

As students and counselors work on college applications, selectivity also remains a part of the application process. Harrington has noticed he has to work with students to develop more of a realistic interpretation of applying to college.

“I think a lot of kids develop an image of a school that’s really not based off of much,” Harrington said.

As a result of this expansive image, the volume of applications has increased. Applications from first-time freshmen, prospective transfer students and international students increased by a minimum of 3% for first-time, transfer and international students from 2016-2017, according to the 2018 State of College Admissions report from The National Association for College Admission Counseling (NACAC).

While Zaiser said he believes applicants could possibly encounter greater selectivity, the possibility of increased applications with the Common App could make Elon more selective over time. For the past 10 years, Elon has averaged a 57% acceptance rate though this year’s rate of applicants who were accepted was higher than ever before, with acceptance rates soaring to 72%.

“Naturally, when applications increase, there is a likelihood that more students may not be admitted. However, selectivity is secondary,” Zaiser wrote. “We are an inclusive environment and we look for reasons to admit students.”

Though enrollment has been steady for the past 19 years, growing annually by approximately 50 to 100 students, the addition of selectivity with applications could hinder the process of increasing student enrollment as a part of the development model of Elon’s 2030 Strategic Plan. But since enrollment rates are slow, it is unlikely the addition of the Common App will increase enrollment immediately.

“And since we will continue to grow a little each year, I don’t expect we will become considerably more selective immediately,” Zaiser wrote. “Though over time, as we assess the percentage of admitted students who enroll by application platform, we will most likely find the admit rate declining.”

Brevard College falls under the remaining 67% that do not use the Common App for admissions. Instead, Brevard uses the College Foundation for North Carolina, a North Carolina application process specifically for in-state residents and that also provides resources for student loans and scholarships. And in addition, Brevard has its own application process, free of charge.

“We’re fine with what we have,” said David Volrath, director of admissions and financial aid at Brevard.

Volrath has no plans to consider switching application systems.

But for Appalachian State, extending the number of application systems is a priority, which Pope defined the shift toward the Common App as “intuitive.”

“It appeals to students with more diversity or lower access to other applications,” Pope said.

Besides growing diversity for in-state applicants, Zaiser and his admissions team hope to see more international and transfer students apply to Elon. According to the 2019 Spring Registrar Report, 150 international students remain part of Elon’s campus, composing about 2% of Elon’s total enrollment.

“Well, the hope is that more college counselors will put Elon on students’ lists because they won’t have to do a separate application,” wrote Hebe Fuller, Elon director of international admissions, in an email.

In addition, transfer students will also use the Common App though the overall effect of transfer applications is variable. The average acceptance rate of undergraduate students who applied to transfer to Elon was 62% as of 2019, according to the University Fact Book.

students were accepted at Elon University out of the 10,729 who applied.

“We anticipate growth in the applicant pool for both first-year students and transfers since joining the Common App makes Elon more accessible to more students,” Zaiser wrote.

As the number of applications are projected to increase, Zaiser said he feels Elon’s admissions staff is prepared to handle the influx. Currently, there is a team of six members involved in implementing the Common Application, led by Melanie May, director of data and communications for admissions, and other directors of admissions.

May was unavailable to comment, but Zaiser estimates the implementation process will “take approximately five months.”

According to Pope, Appalachian State’s implementation of the Common App improved the university’s web services through automatic transcription downloads. As a result, less manpower was needed for the processing of applications, designating admissions members to other tasks, such as providing more support toward prospective students.

The case for unification

Though facets of the Common App process proved to simplify issues of capacity in Appalachian State’s case, the addition of the Common App paves the way for future partnerships with other application systems. The Common App’s rivals — the Universal and Coalition Applications — are also being taken into consideration by other universities.

Established in 2007, the Universal College Application (UCA) is affiliated with 18 universities, including Cornell, Johns Hopkins and Rhodes College. Established in 2007, the UCA is a modernized version of the Common App, with features such as automatic saving and high-speed tech services. Since its university offerings are limited, no North Carolina universities are affiliated with UCA.

While Elon has no plans to accept the UCA, they will continue to use the Coalition for Access, Affordability, and Success platform. Elon partnered with the Coalition two years ago along with five other North Carolina universities, a small number compared to the more than 140 universities in the United States who utilize the Coalition.

Founded in 2015, the Coalition pertains to lower-income level students, promoting online portfolio work throughout high school, particularly for younger students seeking to apply to college. All services provided by the Coalition are free of charge, and Appalachian State is taking the application service into consideration.

For Sharp, personal writing supplements are her main concern as she will try to distinguish herself from the thousands of other prospective applicants applying to Elon in the following year. In the 2018-2019 year, more than 10,000 prospective students applied to Elon, with 1,698 of those students planning to enroll in the fall.

With Elon already preparing for the next batch of applications, Sharp has realized making the final decision will always be the hardest part of her decision to attend college. With her last year of high school underway, Sharp plans to make a decision of college for herself – not her parents.

“I think I’m most excited for all the traditions that come with senior year,” Sharp said, “and being able to apply and finally know where I’m going and where I’ve been accepted and making the decision actually.”