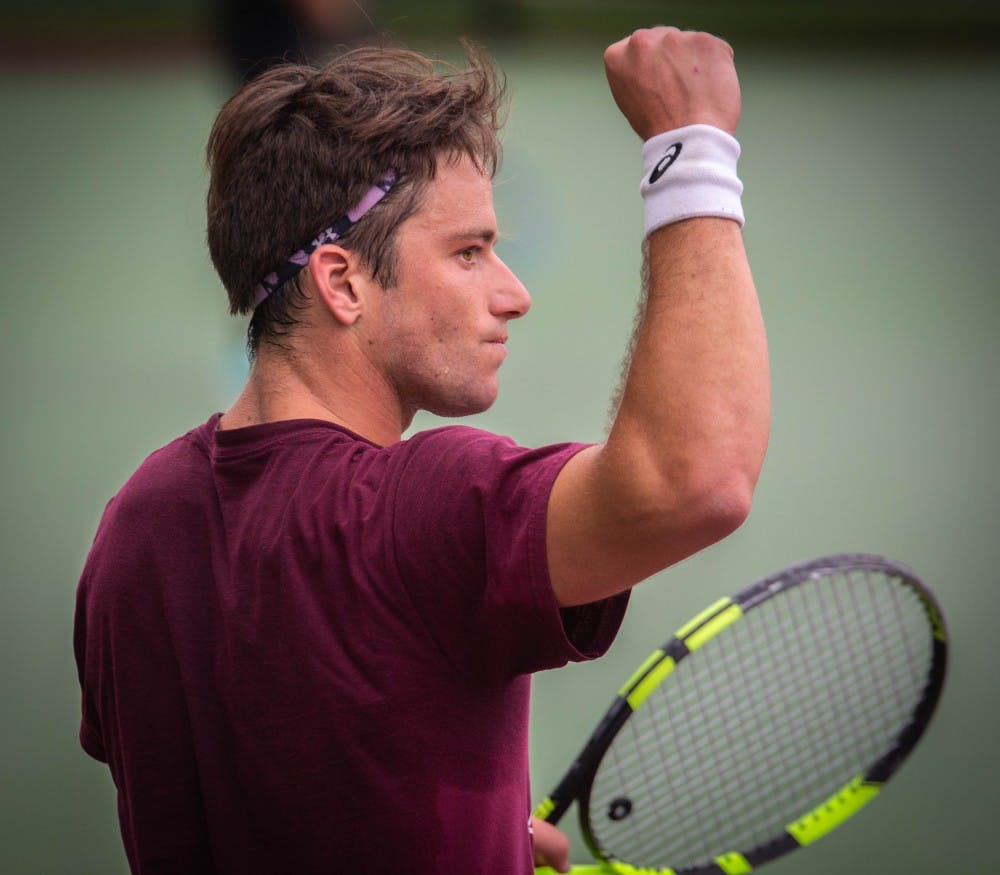 The men’s tennis team faced off against number one seeded University of North Carolina at Wilmington Seahawks in the final round of the Colonial Athletic Association (CAA) Tournament.

The Phoenix started off strong, taking the doubles point to give it an early lead. Sophomore Kyle Frankel and Ponce won first, followed by the senior team of Mario Paccini and Felipe Sarrasague winning to secure the point headed into the singles portion of the match.

The Seahawks came out in singles play confident, and took down top Phoenix competitors like Paccini, senior Felipe Osses-Konig and senior Taylor Foote. This was the first singles competition that Foote had lost all season, coming just after he clinched the match for the Phoenix in the semifinals the day before.

There were three more singles matches still in play, and with UNCW up 3-1, all it needed was one more victory in singles play to be crowned the CAA champions over the Phoenix.

Sarrasague beat his opponent in two sets (6-4, 6-2), to cut the Seahawk lead to 3-2. The Phoenix were now behind by only one, but all the Seahawks still needed was one more singles victory. The Phoenix had to win their last two matches to secure the championship.

The two matches left to play were Ponce’s and Frankel’s. Before the two could finish out their matches, a suspension was called on all play due to rain. Play was then moved to the Piedmont Indoor Tennis Center in Greensboro.

When play resumed there, Frankel was in a tie-breaker with his opponent, Seahawk freshman Bruno Caula. For Ponce, he was just finishing out his second set against opponent, freshman Leo Sprovieri.

Frankel won his tie-breaker, 7-5 over Caula, to even things up, 3-3. All eyes were now on the remaining match of Ponce and Sprovieri, which had gone into its third set. Ponce started out strong, but Sprovieri began to climb back to claim three games. Ponce took the final match 5-3.

His final point to clinch the game brought cheers from the fans who had driven to Greensboro to see out the rest of the match, and brought Phoenix players to tears over their history making victory.

“I’m feeling amazing, that was an amazing experience,” said Ponce after celebrations ensued. “It was just amazing playing with this crowd, it was a good experience, not a lot of people can do that.”

The win for the Phoenix secures a place in the NCAA regionals tournament. Seedings are yet to come out, but head coach Michael Leonard is hoping for a number three seeding in the Regionals play.