Alamance County members voice their opposition for the potential gas pipeline installation projected to run through their community. 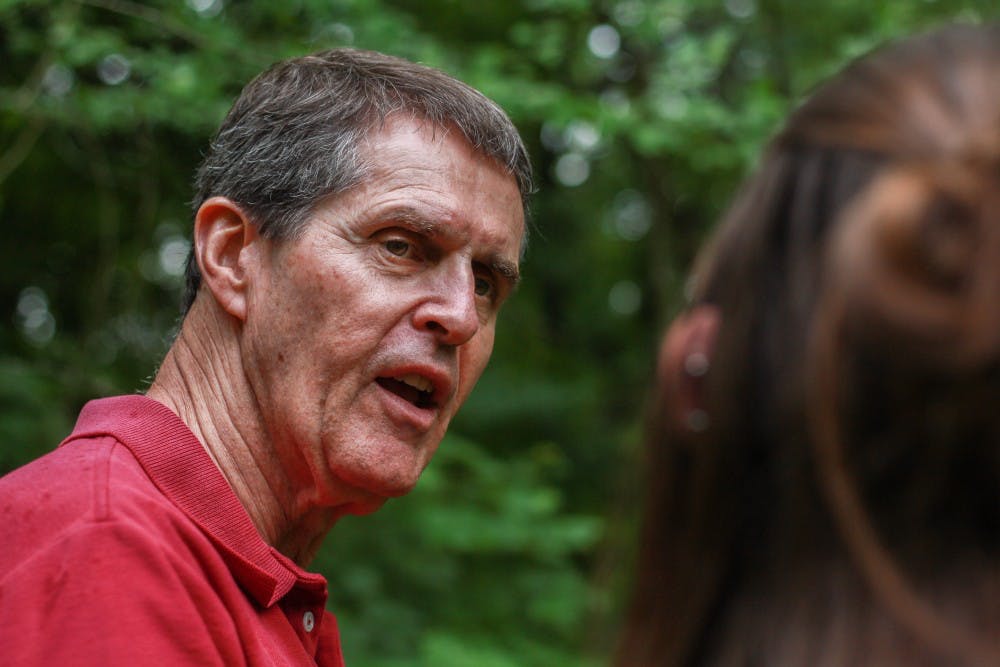 Photo by Abby Gibbs | Elon News Network
David Naylor is a landowner in Alamance County. His property could potentially be directly affected by the Southgate Pipeline Extension.

Residents of Alamance County have been working hard to fight against a potential pipeline extension that would run through much of their land and propose a threat to the environment around them. The extension of Mountain Valley Pipeline "Southgate" is set to be decided by 2020. Until then, community activism is set to continue.

MVP proposed its "Southgate" project in May 2018, an extension of the preexisting MVP pipeline that currently spans 73 miles from southern Virginia to central North Carolina.

The 73-mile extension would expand into southern Virginia and cross into central North Carolina in Rockingham County and end in Alamance County.

The pipeline will transport vast amounts of natural gas supply from the Marcellus and Utica shale production (located in New York, Pennsylvania, Ohio and West Virginia) to markets in the mid- and south-Atlantic regions of the United States, according to MVP.

Much of community concern derives from the notion that the pipeline extension would be a gas-fracking system. Fracking is a “drilling technology used for extracting oil, natural gas, geothermal energy, or water from deep underground,” according to the Independent Petroleum Association of America.

Caroline Hansley, an organizer for the Sierra Club — the largest environmental organization in the country with more than 3.5 million members — said the pipeline “is a high-pressure fracked-gas pipeline.”

But, MVP Southgate does not mention anything about a gas-fracking system.

“This is an interstate natural gas transmission line, and it does not involve any natural gas production in Virginia or North Carolina,” said Shawn Day, MVP’s media representative.

The 24-by-16-inch pipeline is designed to transport 375 million cubic feet of natural gas per day to the Public Service Company of North Carolina Energy (PSNC) now known as Dominion Energy to customers as well as to new and existing markets in southern Virginia and central North Carolina.

Before any construction begins, MVP must obtain necessary regulatory authorizations from the Federal Energy Regulatory Commission (FERC). The MVP Southgate team will also seek review from other federal, state and local agencies.

Debating about the pipeline necessity

Many environmental activists and members of the Alamance community believe the extension is unnecessary.

Hansley called the pipeline an “unneeded project.” But data may suggest the opposite.

The region’s existing infrastructure is constrained during periods of high demand, and the North Carolina Utilities Commission has recognized the need for additional interstate natural gas pipeline capacity.

Between 2015 and 2035, North Carolina’s population is expected to increase by nearly 2 million people. As the population and communities continue to grow, local gas and energy distribution companies also increase the number of customers they must serve.

is the number of miles the proposed extension would expand into southern Virginia and cross into central North Carolina.

Alamance County, in particular, has recently annexed an additional 28.999 acres of land where a new residential neighborhood will be built to house almost 50 families.

Dominion Energy, a local energy company, has added nearly 100,000 new customers over the past decade, and it needs an additional supply of natural gas to meet residential and commercial demand.

Despite the potential need for the pipeline extension, members of Alamance County are wary of the possibility of the pipeline.

It usually takes between two and three years to get permits and begin construction on the pipeline. During that buffer time period is when most opposition enters. Several local government officials and environmental organizations have voiced their opposition.

Galey's biggest concerns with the pipeline regarded property owners who would be impacted by it and the environmental impact it may have.

“I was concerned about the pipeline crossing streams and the disruption of water quality from that activity,” Galey said. “Although the company said that they had plans for protecting the water quality, I find it hard to believe that they can clear such a large area of stream bed and not have any lasting impact on the water quality.”

cubic feet of natural gas per day is designed to be transported to the Public Service Company of North Carolina Energy.

Elon University is one of the few colleges that could possibly be impacted, along with Alamance Community College. Elon’s Student Government Association joined Galey and the county in their opposition by also passing a resolution to oppose the pipeline on March 21, 2019.

A petition opposing the pipeline installation was created by Elon’s Sierra Student Coalition, an environmental organization on campus and received almost 300 signatures.

“Elon students are very passionate about certain causes, and they care about the Elon community, especially with Alamance County being very close and the pipeline within six miles. It’s not just going to impact taxes, but your daily lives,” said Miki Salamon, historian of Elon Sierra Student Coalition.

There has also been opposition from the Haw River Assembly and the Sierra Club.

Emily Sutton, member of the Haw River Assembly in North Carolina, is one of many activists opposing the pipeline.

“This pipeline is a threat to the Haw River watershed and the people and ecosystems that depend on it,” Sutton said, who is the Haw Riverkeeper.

There are several potential environmental concerns associated with the installation of an interstate pipeline system.

The proposed route of the pipeline would cut through many streams and tributaries, including the Stoney Creek Reservoir and the drinking water supply for the many parts of the city of Burlington, according to Sutton.

Horizontal Direction Drilling methods would be used to cross this wetland and reservoir. The process involves coating the drills with industrial fluids to lubricate the machinery, which has often caused significant water contamination, according to Sutton.

Sutton also pointed out that not only is the Haw River a habitat to many different species, but it is also a popular outdoor recreational stop for many local residents.

On April 27, the Haw River Assembly and the Sierra Club united to host "Paddle Against the Pipeline." The event was essentially a protest in which about 20 attendees kayaked down the Haw River, following along the path where the potential pipeline would be.

Jason Crazy Bear Tircuit Keck, a member of the Louisiana Band of Choctaw and his wife, Crystal, a member of the Occaneechi-Saponi tribe in Pleasant Grove, also attended the protest. The couple led the group in a traditional Native American ceremony, which included tribal songs and praying for the water of the Haw River.

member of the Louisiana Band of Choctaw

Keck previously told the Time-News, “I’m going to end this, real quick, by letting you know that I am a firm believer in economy and profit and all of those things that make our town better, but I believe in it for the people and by the people. I don’t believe in it at the expense of the people.”

Another risk that accompanies natural gas pipelines is leaks and explosions.

On April 11, 2019, a natural gas pipeline in Durham leaked and eventually exploded, killing one and injuring 17. The pipeline explosion in Durham was only an eighth of the size of the Southgate extension.

Aside from environmental concerns and other hazards, landowners near and on the projected path of the pipeline could potentially face major impacts as well.

MVP stated that both permanent easement and temporary construction easement processes will be necessary for this project.

“An easement provides an operator with limited use of the property for defined, specific purposes. The acquisition of an easement does not transfer ownership of the land to MVP Southgate; it does, however, give the project the right of access for construction, maintenance, and safe operation of the pipeline,” according to MVP's website.

Eminent domain, wherein the government is able to take private property and convert it to public use, may be enacted if an agreement cannot be made over the easement process between the landowner and MVP.

A landowner who would be potentially affected by the pipeline is local chiropractor David Naylor, who walked to the bank of the Haw River behind his property to speak to protesters.

Naylor has a white oak tree located on his property that is nearly 300 years old, with a canopy that stretches 104 feet wide. The tree has a lot of sentimental value as his daughter and others said their wedding vows underneath the shade of the old oak.

Compared to the land on his property, Naylor does not want to sacrifice the oak tree's health.

"I'd rather give up [land], rather than that," Naylor said in regard to the oak tree.

The construction of the pipeline would dig too close to roots of the tree, and the oak would most likely not survive.

The estimated time for constructing the 73-mile pipeline is around a year. During this time period, local residents face many threats and inconveniences.

Virginia landowners had many complaints during the construction of the original pipeline back in 2018 ranging from traffic, loud noises, foul smells and pollution.

Residents and officials still have a few more months to voice their opinions before the FERC officially permits the construction of the MVP Southgate project.

“I believe it’s very important for people to make their opinions heard,” Hansley said. “I think because of that is even more important that people contact their elected officials at all levels.”