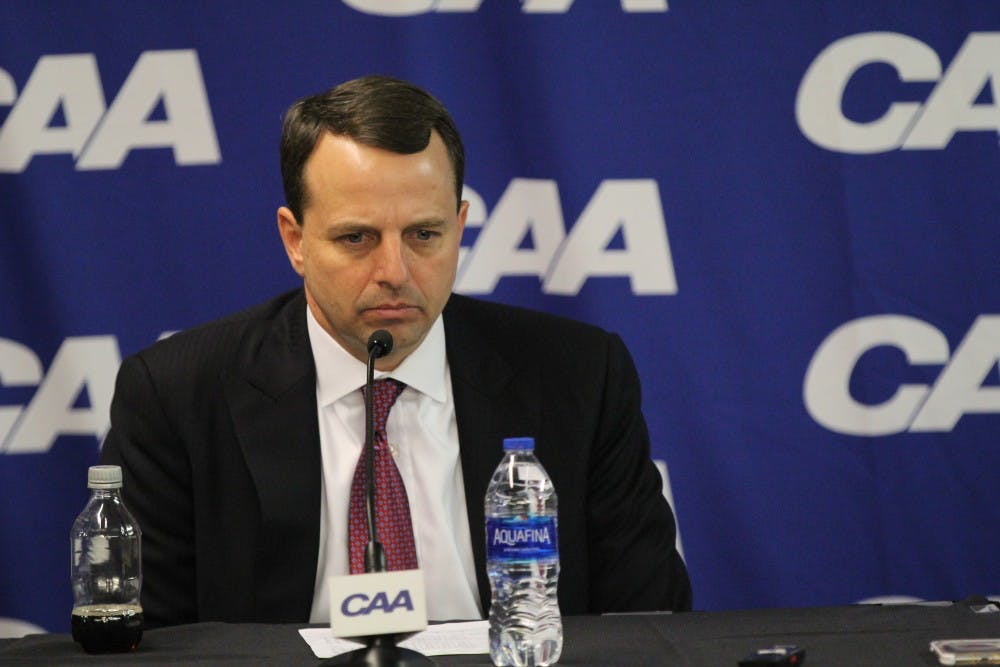 Photo by Erik Webb | Elon News Network
Men's basketball head coach Matt Matheny speaks at a postgame press conference following Elon's 86-79 loss in the first round of the 2018 CAA Tournament to the University of Delaware.

Elon University men’s basketball head coach Matt Matheny has been fired following an 11-21 (7-11 in CAA) season. Matheny coached 10 years for the Phoenix — five years in the Southern Conference and five years in the Colonial Athletic Association. Matheny will leave Elon with an overall record of 151-169. This comes days after three players entered their names into the NCAA Transfer Portal with hopes to leave Elon.

Matheny suffered through five losing seasons during his tenure. This past season was Matheny’s worst record since his inaugural season as head coach when the team posted a record of 9-23 (5-13 in SoCon). Elon has only won one CAA Tournament game since joining the league in 2014-15 under Matheny, and this year the Phoenix fell to the University of North Carolina Wilmington — a team Elon had beaten twice already in the year.

Matheny ranks third all-time in wins at Elon, just 10 wins behind Graham “Doc” Mathis for second all-time. The Statesville, North Carolina, native had one 20-win season during his tenure — in 2012-13 when the team had arguably its most productive year under Matheny. In the 2012-13 season, Matheny coached the team to its only Division I postseason tournament when they made the CollegeInsider.com Postseason Tournament (CIT).

“I want to thank Matt for his leadership over the past 10 years,” Director of Athletics Dave Blank said in a statement. “He has been an excellent ambassador for Elon athletics and Phoenix basketball. He has had a positive impact on the lives of the players and we are grateful for all that he has done. His players have excelled in the classroom and as engaged citizens on campus and in the community. However, after a thorough review of the program, I believe a new direction at this time is necessary to move our program forward and provide the best chance for our student-athletes to compete for championships. I wish nothing but the best for Matt and his family.”

That same year, Matheny was also named the 2012-13 SoCon Head Coach of the Year and a finalist for the Hugh Durham Award, which is awarded to the best mid-major head coach. Before coming to Elon, Matheny was an assistant coach at his alma mater, Davidson College. While at Davidson, Matheny made the NCAA Tournament three times, including being a part of the team’s shocking run to the Elite Eight in 2008 led by Stephen Curry, the now three-time NBA champion and two-time MVP on the Golden State Warriors.

Matheny’s firing comes recently after Tony Shaver, head coach of fellow CAA-school The College of William and Mary, was fired following 16 seasons at the helm.