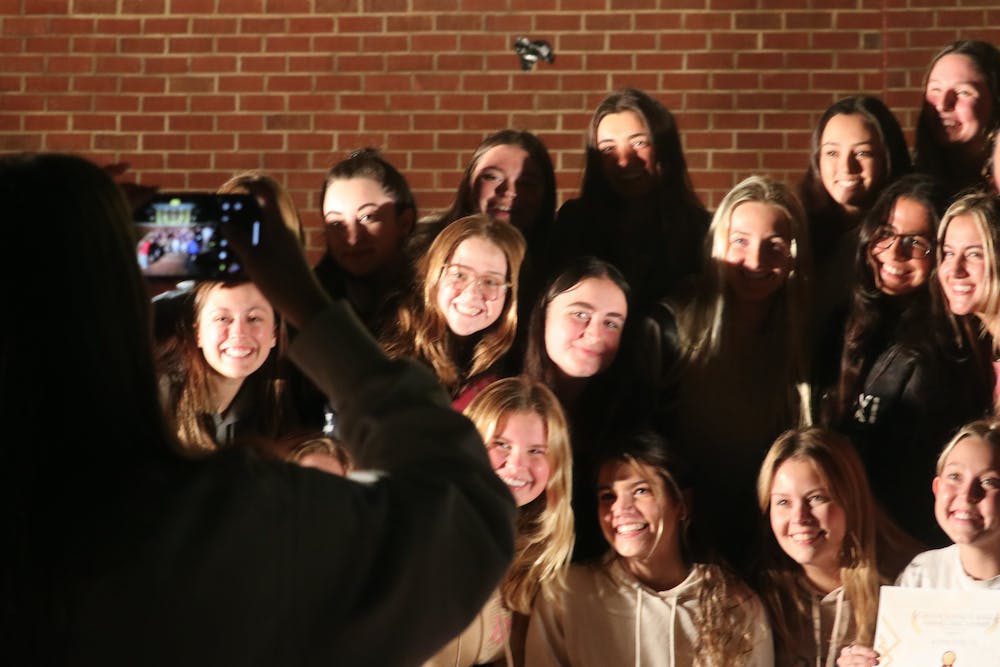 Photo by Ellis Chandler | Elon News Network
Members of Alpha Xi Delta's Greek Dance team pose for a picture together on Oct. 28 at the Greek Week awards ceremony. The organization won first place for the sorority division of the Greek Dance competition.

On the final day of Greek Week, Interfraternity Council and Panhellenic Association organizations were recognized for the week’s accomplishments at an awards ceremony on Medallion Plaza.

Elon sophomore Marley Lazo-Murphy said she’s proud to be a part of her organization and the winning team.

“We put in so much work and it’s just nice to see everyone excited about it,” Lazo-Murphy said. “The competitiveness fed into how hard we wanted to try. It was really nice to work as a team with other organizations.”

The night began with a summary of the week. 75 students volunteered through the various service opportunities offered during the week, totaling over 100 cumulative hours of work. There were also over 80 blood drive donors, and 56 were first-time donors.

An updated total from the Habitat for Humanity fundraiser was also announced. Organizations raised over $36,000 for the nonprofit organization. According to Assistant Director of the Kernodle Center for Civic Life Abigail Wiatrek and graduate apprentice for the Kernodle Center for Civic Life Sadie Richey, the cost of building a house through Habitat for Humanity in Alamance County is only $30,000.

There were also over 2,000 attendees to Greek Dance in the Schar Center. There were two categories of winners: one for sororities and one for fraternities.

“I’m honestly so proud of all of the girls in our dance,” Fackrell said. “They worked so hard and so many of them didn’t have any dance experience so seeing them put on the show that they did was so exciting. I’m really proud of the piece we put out, I think we made a great work of art and I’m really happy that we won.”

First place in the fraternity category went to Beta Theta Pi, followed by Sigma Chi in second and Sigma Phi Epsilon in third.

Specialty awards were also given to various chapters for Greek Dance and Greek Week. Sigma Sigma Sigma was announced as the best Greek Dance theme. The Greek Dance crowd favorite was Kappa Delta. The most creative routine was Delta Upsilon’s.

Alpha Omicron Pi won the award for most spirited.

Sigma Sigma Sigma won the award for philanthropic spirit and was recognized again for donating over 1,000  items to the academic supply and hygiene drive.