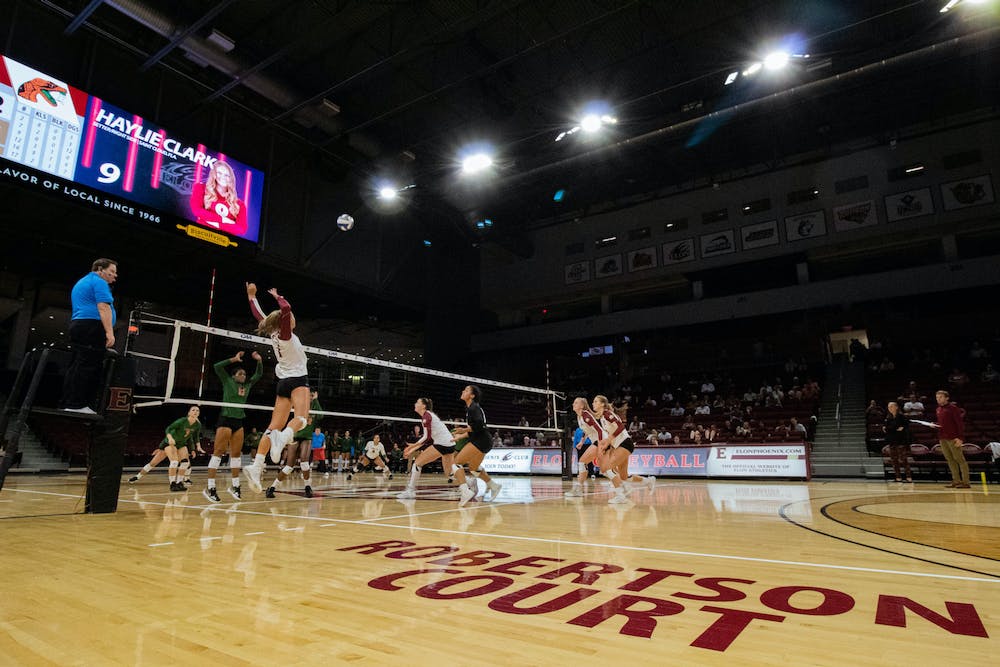 After winning the second and third sets, the Elon University volleyball team could not close out the Florida A&M Rattlers, as the Phoenix lost the fourth and fifth sets for its fifth consecutive loss.

Elon dropped the first set but cruised through the next two frames to take a 2-1 lead in the match. However, Florida A&M battled back in the fourth and held off a late charge by the Phoenix to win the set 26-24 and force a deciding set.

The fifth set was the first of the season for the Phoenix. An 8-0 run in the middle of the set by Florida A&M proved too much for Elon to overcome, as the Rattlers took the set 15-5 to clinch the match.

“We made some unusual errors in the fifth set. We had some people do some things that they don’t normally do,” head coach Mary Tendler said. “They got a lot of good swings and kills on the ball, so they deserved to win the match overall.”

For the first time this season, Elon finished a match with a hitting percentage of over .200, but the team had a negative hitting percentage in the final set. Tendler said she was pleased with Elon’s offense in stretches but wants the team to be more consistent with its execution.

“It was good to see our offense come to life, kind of for the first time all year,” Tendler said. “We got some rhythm going and had a lot of different people be effective for us, so that was really encouraging. We know it’s in us, we just need to try to sustain it for the whole match.”

Senior outside Leah Daniel finished with a team-high 16 kills and six aces. While this was Elon’s most efficient offensive performance of the season, Daniel said the team needs to work on its serve receives to help set up its offense.

“That’s always a big thing for us,” Daniel said. “The better our service is, the better our offense is going to be and the more consistent we’ll be.”

After winning the second set 25-13, Daniel said Elon let its foot off the gas and allowed Florida A&M to begin regaining momentum. For Daniel, Elon’s run to last season’s Colonial Athletic Association championship match has put a target on the team’s back this year, as she believes opponents are more motivated to beat them.

“We almost got a little too comfortable going into the third set,” Daniel said. “This whole entire year, we’re talking about how everyone’s out to beat us, especially after last year when we surprised people.”

The loss drops Elon’s record to 1-7, but Daniel said the team is not phased by its early season results.

“The record doesn’t show how well we’re playing,” Daniel said. “We’re getting stronger and stronger each match, and we’re learning things that we can apply toward conference.”

Senior Jordan Gower, who leads the CAA in digs, missed her second straight match due to illness, and freshman Sydney Daniels made her first career start for Elon at libero in her place. Daniels finished with a team-high and career-best 22 digs. Freshman Brooke Doherty also posted a career high with 12 kills.

“The first years don’t have any fear, they just go out there and play hard,” Tendler said. “I like that about them, and they’ll go out and get better as they go.”

Senior setter Haylie Clark posted a double-double for the Phoenix, finishing with 43 assists and 13 digs. Senior middle blocker Jenn Krzeminski led Elon with six blocks after missing the team’s last match against Duke with an illness.

Elon plays again tomorrow at Schar Center against the University of North Carolina Greensboro at 7 p.m. in the final game of the team’s Aggie/Phoenix Volley for Unity Tournament.