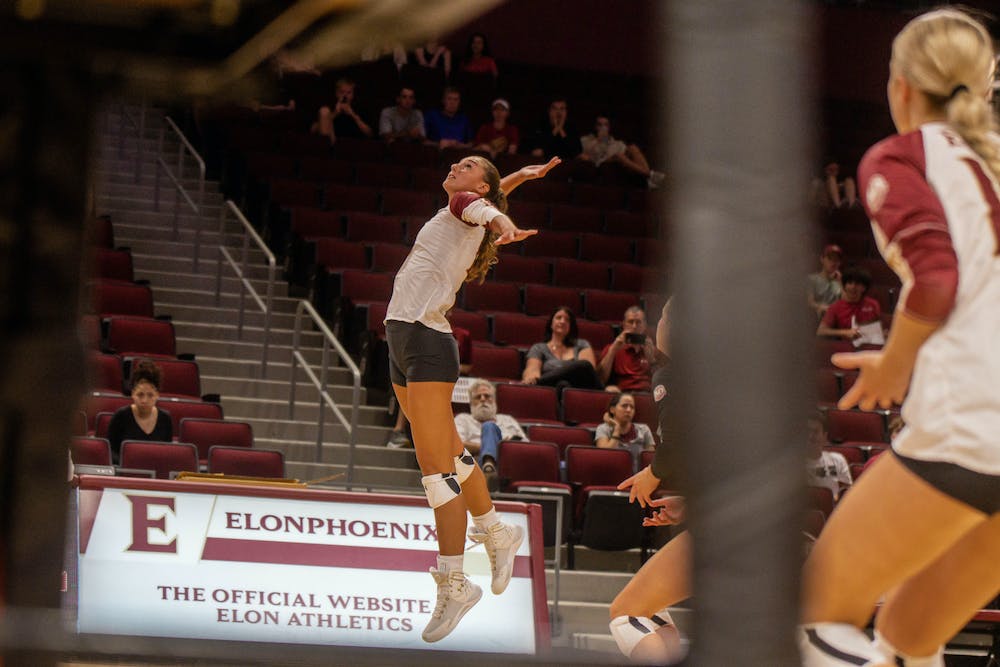 Photo by Ella Pitonyak | Elon News Network
An Elon University volleyball player goes up for an attack in the team’s home opener against Duke University at Schar Center on Sept. 6. Elon lost in four sets.

After playing its first six matches of the season away from home, the Elon University volleyball team lost its home opener to the Duke University Blue Devils in four sets at Schar Center.

The loss dropped Elon’s record to 1-6 and is the team’s fourth straight defeat. However, head coach Mary Tendler said she was happy with how the team played against an experienced Blue Devils team and thinks the Phoenix improved after going 0-3 at last weekend’s NC State Tournament.

“We competed, we just got into some ruts where we let a server serve a lot of points in a row,” Tendler said. “We did better at some things from what we did last weekend. We had some different shots going on. Overall, we just couldn’t sustain that through the whole match.”

Elon jumped out to an 8-3 lead in the first set but won just eight points the rest of the way, as a 14-0 run in the middle of the set from the Blue Devils put the set out of reach for the Phoenix.

“They were struggling on serve receive and were giving us a lot of opportunities,” Tendler said. “I felt like if we played well that we could compete and take sets and maybe take the match off of them, and the players believed that.”

The second set was the first time Elon has won a set against Duke since 1974, as the Blue Devils swept the Phoenix in their previous five meetings.

With 673 fans in attendance, it was the biggest crowd at an Elon volleyball match at Schar Center since last season’s home opener. Senior setter Haylie Clark, who finished the match with a team-high 25 assists, said the atmosphere in the arena from the students, fans and band helped inspire the team in the second set.

“It was loud, I have not seen so many people here in a really long time,” Clark said. “The support was amazing.”

A 5-0 run by Duke late in the third set, which included a pair of service aces by Nikki Underwood, propelled the Blue Devils to a lead it did not relinquish on the way to a 25-20 win.

The Blue Devils raced out to a commanding 11-5 lead in the fourth set, but the Phoenix rallied to pull within two points late in the set. However, Duke won the final two points to take the fourth set and clinch the match.

Despite the loss, Clark said Elon played a strong match and believes the team is ready for its first CAA match on Sept. 17.

“We came out with a fire under our butts and came out so strong, I think we took them by surprise a little bit,” Clark said. “We played amazing, and I thought this was the best we’ve played all preseason.”

With 436 digs and 16.77 digs per set as a team this season, Elon leads the Colonial Athletic Association in both categories. Although the team played without senior libero Jordan Gower, who entered the match ranked fifth in the country in digs per set, Elon posted 57 digs against Duke, as sophomore Caroline Doyle had a team-high 21 in her first career start at libero.

Senior outside hitter and preseason CAA Player of the Year Leah Daniel led the Phoenix with 14 kills. Elon, which ranks last in the conference in kills and kills per set, finished the match with 36 kills compared to Duke’s 53. Elon also finished the match with a .101 hitting percentage and is yet to surpass a hitting percentage of .200 this season.

Though Elon has been the most prolific defensive team in the CAA early this season, Clark said the next step for the team is finishing more points offensively so it does not have to defend as much.

“We shouldn’t be getting so many digs because we need to put the ball down in transition first,” Clark said. “Our defense is insane. If we don’t get the ball down, they’re behind us digging it, but we’re definitely trying to limit the digs just a little bit so we can kill the ball in transition.”

Elon will host the Volley for Unity Tournament at Schar Center this weekend with matches against Florida A&M on Sept. 9 at 7 p.m. and the University of North Carolina Greensboro on Sept. 10 at 7 p.m.