Meet the candidates running for mayor, council of Burlington

The Burlington primary will be held on Oct. 5 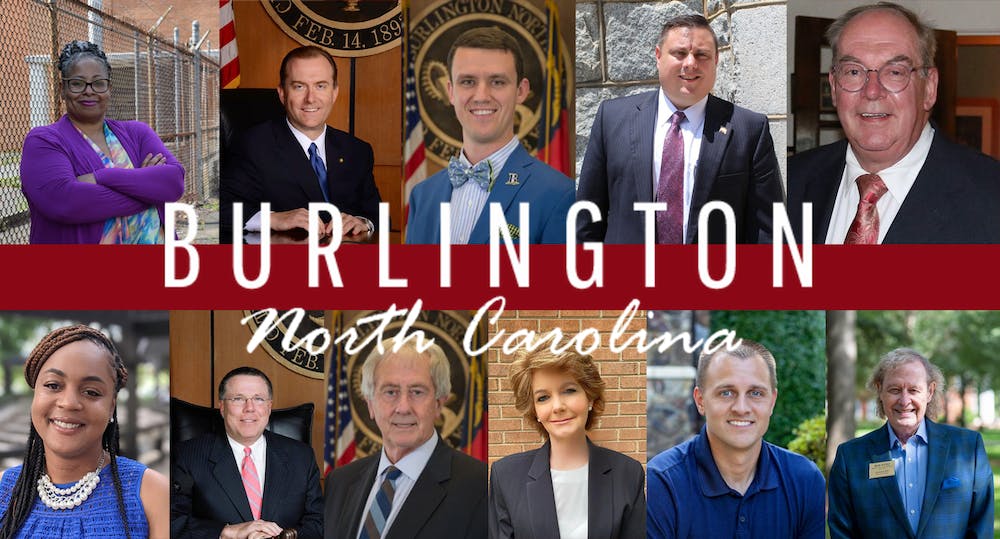 Photo by Kyra O'Connor | Elon News Network
The primary for the Burlington mayoral and city council races will be held Oct. 5, 2021.

The primary for the Burlington mayoral and city council races will be held Oct. 5, 2021. The top four council candidates and the top two mayoral candidates will go on to the general election in November.

Residents, including Elon students, faculty and staff, who live in the municipality of Burlington are eligible to vote in both the October primary and the November general election. Residents can vote early, vote by mail or on Election Day.

Incumbent Ian Baltutis was first elected as mayor of Burlington in 2015 and has served three terms as mayor. In his campaign, Baltutis said he will continue to work on key priorities he has held since he first ran for mayor in 2013, including transportation, job equality, economic prosperity and affordable housing.

Boyd did not respond to Elon News Network’s multiple requests for comment.

Jim Butler is a current member of the Burlington City Council, having served in the position since 2017. While serving on the city council, he forced on issues related to city growth, quality of life and fiscal responsibility. He was born in Burlington and has been active in the community for over 25 years.

Butler did not respond to Elon’s News Network’s multiple requests for comment.

Caleb Massey, born and raised in Alamance County currently serves as a Funeral Director at Lowe Funeral Home and is the founder of the non-profit Grace Hands. According to his campaign website, as mayor, Massey will “take a proactive, not reactive, approach to uniting this community, growing economic opportunities to Burlington, and making this city safer once again.”

Massey did not respond to Elon News Network’s multiple requests for comment.

Donna Vanhook currently serves as an associate pastor at Union Chapel United Church of Christ and is a social justice fellow with the North Carolina Black Alliance. Vanhook said major focuses of her campaign are affordable housing and increasing broadband access for students in Alamance County. Vanhook said she hopes to find ways to address and remove barriers to economic development, if elected as mayor.

“We know that there are some things that are built into every system, historically,” Vanhook said. “I want to make sure other people know it’s built into the system, and on top of that, we have to remove those barriers so everyone has a chance to thrive.”

Dejuana Bigelow currently serves as a patient access specialist at Cone Health. She said a major focus of her campaign is advocating for affordable housing within Burlington. Bigelow hopes her platform of advocacy, representation and economic growth will encourage others to share their voices and gifts.

“I’m hopeful that there will be children, especially minority children, that will see me fighting and working to create a better Burlington,” Bigelow said.

“I think the biggest issue Burlington faces is socio-economic and finding people who are willing to come out of the community and sit on city council,” Beasley said.

Bob Byrd served on the Board of Commissioners from 2014-2018. Byrd’s major focus of his campaign will be bringing economic growth to Burlington through growing the city’s tax base and lowering taxes for small businesses. Another main focus of Byrd is to push for inclusion within the city and working with anti-racism groups.

“My experiences in this community [are] very broad and very deep,” Byrd said. “As a result of all that experience, I’ve learned a lot of things about, and I mentioned before, how local government works and how to get things done.”

Sergeant Wendy Jordan is now retired, but served in Burlington law enforcement for over 25 years as a dispatcher detective, community police officer and supervisor. Key components of her campaign include reducing crime and improving quality of life in particular areas of the city.

Jordan did not respond to Elon News Network’s multiple requests for comment.

“As the [city] manager, I’ve literally had the opportunity to work in every community in the city. I think what I bring to the table is that I believe people trust me, because people know that I’m there to try and help them,” Owen said.

Wall did not respond to Elon News Network’s multiple requests for comment.