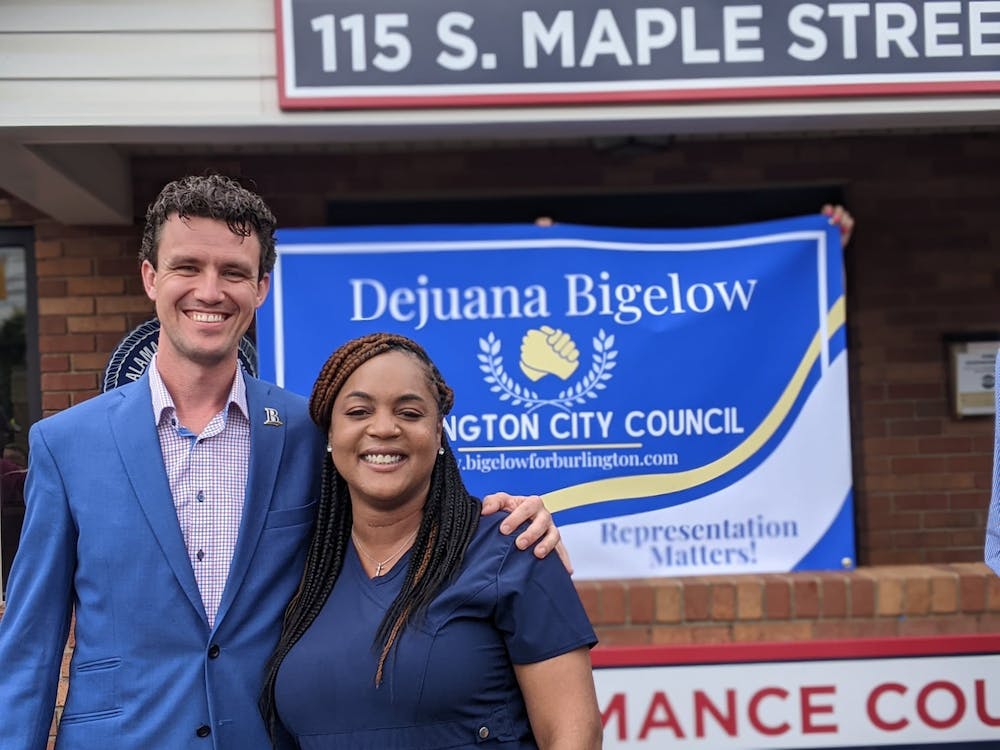 Dejuana Bigelow and Ian Baltutis filed to run in municipal elections this fall at the Alamance County Board of Elections office on July 2, 2021. Photo courtesy of Dejuana Bigelow for a Better Burlington Facebook page.

As Dejuana Bigelow drove through Burlington, she glanced at vibrant buildings surrounded by greenery on one side and “old and dreary buildings” on the other. The contrast between the buildings reminded Bigelow of how she wants to place focus on current issues in the city, such as affordable housing and representation, in her bid for city council.

Bigelow, a patient access specialist at Cone Health, announced her candidacy for a seat on the Burlington City Council. If elected, she would be the first African American woman to serve on the city council. Bigelow said the absence of diversity on the council is something that she hopes to see change.

Bigelow said she wants to see a unified Burlington that is economically advanced and addresses current issues facing the city. And this fall, Bigelow will set out to create “one Burlington.”

As a Burlington resident, Bigelow has served on numerous boards, including the Alamance Partnership For Children and Cone Health Diversity Council. She also organized and led a Souls to the Polls event to help increase voter turnout during the 2020 election season.

A major focus of Bigelow’s campaign is advocating for affordable housing in Burlington. Bigelow is the president of Future Alamance, a nonprofit organization in Alamance County dedicated to promoting economic development, educational access and civic engagement.

Bigelow said she hopes her campaign and platform of advocacy, representation and economic growth will encourage others to share their voices and gifts.

“I’m hopeful that there will be children, especially minority children, that will see me fighting and working to create a better Burlington,” Bigelow said.

Alongside Bigelow, five other candidates are campaigning for two seats on the Burlington City Council.

Harold Owen, a current member of the Burlington City Council, is running for reelection this fall. Before being on the city council, Owen served as Burlington’s City Manager from 2002 to 2015.

Bob Byrd is a former Alamance County Commissioner who served in the position from 2014 to 2018 and also ran for reelection during the 2020 election season. Byrd recently announced his candidacy for a seat on the Burlington City Council.

Ronnie Wall, the former mayor of Burlington and the current head of The Burlington School, is running for the Burlington City Council this fall.

Charlie Beasley, who serves as an assistant quality assurance manager at Tempest Aero Group, recently filed to run for the Burlington City Council during the upcoming municipal elections in Alamance County.

Residents, including Elon students, faculty and staff, who live in the municipality of Burlington are eligible to vote in both the October primary and the November general election. Residents can vote early, vote by mail and on Election Day.