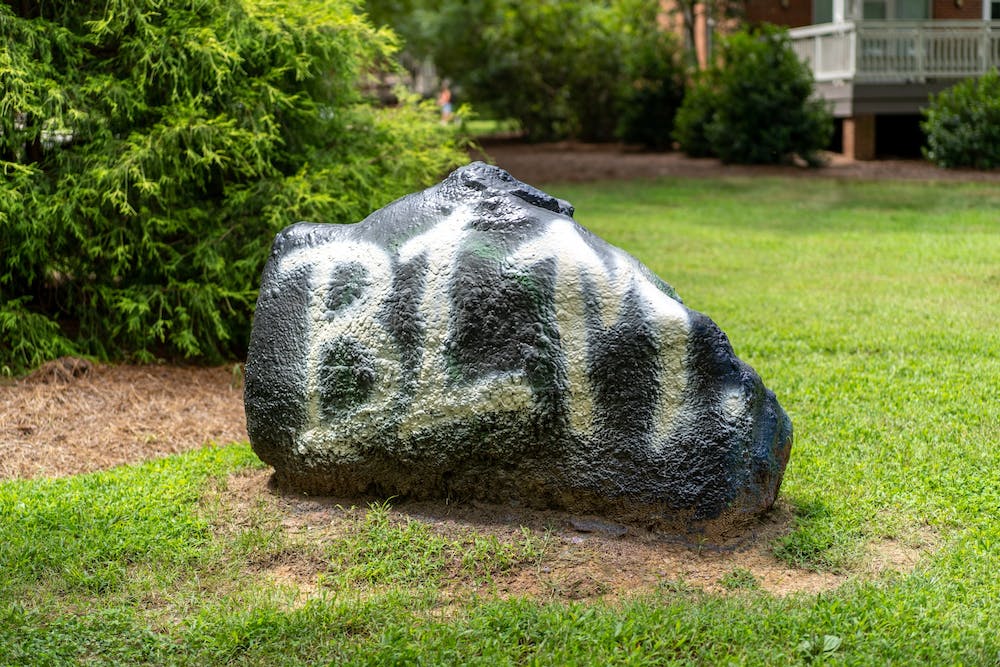 Photo by Clare Grant | Elon News Network
The Loy Center rock, which is usually painted for panhellenic organizations, now has the letters BLM on it for Black Lives Matter.

Book said in a video addressing all students that these action steps are in response to the many Elon students calling on the university for action.

“It’s never been more important than now to commit ourselves to the hope and the vision of these conversations and how we take steps forward as we study, learn and work together,” Book said in the video.

In addition to the appointment of Williams, the university committed to revising curriculum and the removal of the name William A. Harper from a Colonnades residence hall, as well as redesigning the bias response system and basing all future merit pay raises partially on faculty and staff commitment to diversity and inclusion efforts.

Sophomore Mahogany Madden-Roberts said initiatives such as renaming the Center for Leadership building after Janice Ratliff and appointing Williams to be the university’s first chief executive officer of diversity are great first steps, but she hopes that students will be able to express their concerns and see action, not just planning, implemented.

“They want to show these students that … this can be your home. ‘We are a [predominantly white institution], but we still mean well and we want to help you and give you the same experiences your peers may have,’” Madden-Roberts said.

The bias-response system, one of the first five action steps, will be redesigned by Royster and the CEIE, along with Williams and Vice President of Student Life Jon Dooley.

Dooley said having a bias response system on campus is important and not something all campuses have. In addition to aiding students, the bias response system is also used by faculty and staff. Since its inception, the system has been improved, and Dooley said it will be updated this semester as he and Williams continue to work with students.

Since his appointment, Williams announced 10 additional initiatives the university will be working on going forward. These steps are in “three main buckets” listed as action items: commit to new learning through curricular change and program development; commit to achieving greater levels of faculty and staff diversity; and commit to inspired engagement with alumni, parents and friends to recruit and support students.

In a video describing both his new role and the “three main buckets,” Williams said he hopes students will stay connected and involved, encouraging students to contact him with their thoughts and suggestions.

“We intend to create an environment where everyone flourishes,” Williams said in the video. “This will not happen overnight. It will be a journey, one that requires work, commitment and accountability.”

The four intiatives under “commit to new learning through curricular change” include providing anti-racism education for all new students, infusing anti-racist content and pedagogy throughout the curriculum, engaging in a sustained partnership with a racial equity organization, and revamping the Diversity Course Database.

Liz Clark, who identifies as white and is a student organizer for the Boldly Elon Solidarity Collective, said while many of the action steps laid out by Williams looked good, she would like to see more concrete measures, especially when it comes to the Diversity Course Database. Beginning in Fall 2020 and with updates in December and May of the 2020-2021 academic year, the database will be “retooled and organized” with content dedicated to social identity, social justice and systems of oppression in the United States, according to the action steps.

“It’s good if we have a database of … different courses in diversity, but that’s not quite the same as integrating them into your major,” Clark, said. “I looked at the history major previously, and you could take an elective on Black history, but it’s not the same as having it be a part of your major how European history is.”

As part of the collective, Clark and representatives from student organizations advocate for policy change at Elon University. In their list of demands, sent to Book and other university administrators on July 20, the collective outlined a number of actions they think the university should take to protect students, faculty and staff on campus.

The collective wants the university to ensure that all workers have access to personal protective equipment, especially Physical Plant, dining hall and landscaping staff, who will have more interaction with students on a daily basis. As many of those who work on campus in these capacities are unable to work from home — and many as Clark said are Black and brown individuals who are disproportionately impacted by the pandemic. PPE makes sure workers are taken care of as they carry out their roles on-campus, Clark said.

Under the second action item, “commit to achieving greater levels of faculty and staff diversity,” there are three initiatives: develop equity-minded hiring protocols for all university divisions; implement harassment and discrimintaion prevention and anti-bias training for all employees; and reestablish the pre- and post-doctoral program aligned with university needs, which has in the past increased the number of faculty members of color and “expanded the diversity of Elon’s professoriate,” according to the ten action steps.

In her freshman year, Madden-Roberts, who is Black, said she was “shocked” to find out she had a Black professor, and she often only sees professors with a minority identity in the World Language Department. Seeing minority professors or a professor with an identity that “goes against the stereotype” gives Madden-Roberts hope, especially in courses within her major.

“If I’m only seeing white professors, I’m like ‘well, do I really have a chance in this field?’” Madden-Roberts said.

However, the action initiative related to faculty and staff that gave Madden-Roberts pause was a step mentioned in the original five steps debuted by Book: faculty and staff pay raises being tied in part to their efforts with diversity, equity and inclusion.

“Salary has nothing to do with you just wanting to be a better individual,” Madden-Roberts said. “You shouldn’t have to pay somebody just for them to be a better teacher. If you’re a teacher, any kind of teacher or mentor, you should not discriminate [against] who your mentee is or your student is.”

Under the third action item, “commit to inspired engagement with alumni, parents and friends to recruit and support students,” the university plans to enhance recruitment efforts for underrepresented students by communicating its “new test-optional” admissions policy, expand aid for Black students to attend and experience Elon by raising fundraising targets to “include reaching 200 Odyssey Scholarship commitments by 2022,” and expand the Back Life Advisory Council, which serves to advise the president and senior staff.

However, many students feel the plan does not make them feel heard. Gabrielle Wilson, a junior who is Black, said she feels the ten steps are still “too broad” and “vague,” leaving questions unanswered in regards to programming, such as when programs mentioned in the action steps will be available, and if they are required for all Elon students.

“Elon finally acknowledged the fact that we are tired of having the same conversations with no actions to back it up, but while reading the plan it was still vague,” Wilson said. “It hurts because the Black community knows Elon has the capacity and resources to do better, but they aren’t.”