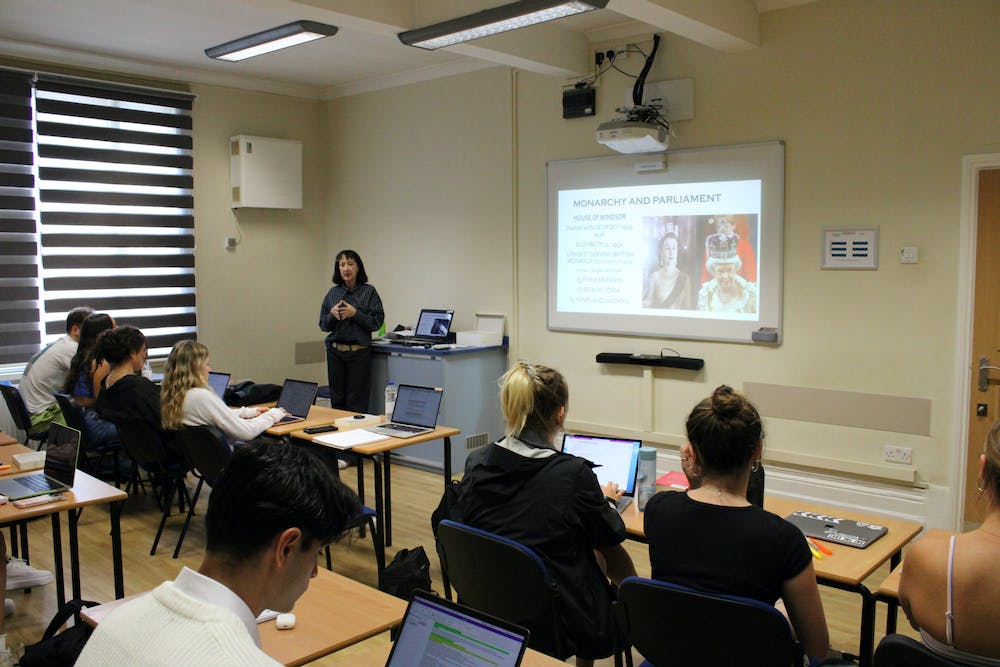 Photo by Michael Wolff | Elon News Network
Professor of British life and visual media Brenda Kelly lectures her class on the British monarchy and the monarch’s role in parliament on Sept. 12 in London.

Elizabeth, who died at age 96, served longer than any other British ruler and is the second longest-reigning monarch in history. Prince Philip, her husband, died at 99 in April 2021. Her son, Charles, was named king Sept. 10.

This fall, there are 104 Elon students studying in the United Kingdom including 82 at FIE, the Elon in London site, 11 at other programs in London and others in Bath, Oxford and Glasgow, according to Dean of Global Education Nick Gozik.

In an email to FIE students Sept. 9, Chief Academic and Operations Officer Julie Ann Andreshak wrote the death of the queen “is a sad and somber time for the nation.” Britain is in a state of mourning, starting from Sept. 9, and will last around 10 days.

Andreshak encouraged students to follow main media outlets for information on anticipated events to mourn the legacy of the queen and the start of the reign of King Charles III.

“This is a momentous point in British and world history, and you are uniquely positioned to experience it,” Andreshak wrote. “Both in your classes and out, you will be discussing and observing these events. Take the opportunity to be present and engage in the moment.”

Andreshak said London, the most populous city in the U.K., will become busier as a result of the late queen’s processions, lying in state, funeral and other associated events.

FIE photojournalism professor Samuel Bland said that Academic Faculty Director Heidi James-Dunbar encouraged FIE professors to carry on as usual. Bland said students may choose to use the current climate of the city as inspiration in his class.

“So maybe it’s photographing one of the events,” Bland said. “There’ll be things going on everywhere.”

While Bland said the national mourning period will not disrupt his class schedule, he is allowing students to photograph one of the events pertaining to the queen’s death for his classes’ self-directed final projects.

Professor of British life and visual media Brenda Kelly said the first main lesson in her class is usually on the monarchy because she said it is important for international students to understand British history, politics and culture.

“We’re all living through a moment in history and a moment in the history of the Royal Family, so I did want to reflect that in the class,” Kelly said.

Michael Wolff contributed to the reporting of this story.