Dancing in the Landscape to be available via recorded video

The annual site-specific performance was canceled in anticipation of Ian 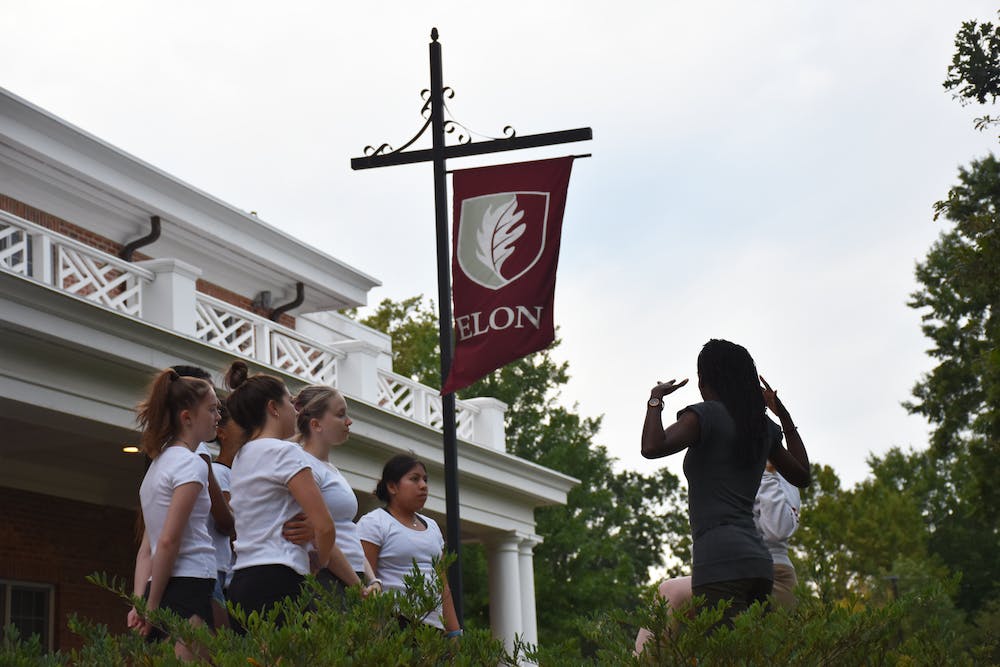 
Jasmine Powell, creative director of Dancing in the Landscape conducts rehearsal with freshmen BFA dance majors Sept. 22, 2022. The performance was originally set for Sept. 30 and Oct. 1 but was canceled in anticipation of storm impacts from Ian.

Elon dance majors were set to trade the Marley floor of the studios for the scenery of the Lambert Academic Village this weekend to open the university’s 2022-23 Performing Arts production season. But the annual site-specific concert “Dancing in the Landscape” was canceled alongside some other Family Weekend events as a result of tropical storm Ian.

In anticipation of the storm, this year’s creative director, lecturer in performing arts Jasmine Powell, recorded the performances in their original locations Sept. 27. The video, she said, will be provided to dancers and their families. Community members interested in viewing the recording can contact Powell via email.

“Relocation to an indoor venue would have defeated the authentic mission of this performance and its integrity to stay connected to the earth would have been lost,” Powell wrote in an email to dancers and families.

Dancing in the Landscape is a part of Family Weekend scheduling, and under the university’s direction, could not proceed. Powell wrote this decision will protect both dancers and audience members.

“Art in any specific setting made with the intention to be inspired by its surroundings only has one place to live - its original site,” she wrote. “The moment that art is moved off its original site, it no longer holds the same value of its conception. It can be reworked to create a new meaning connected to its new site, but the inherent integrity and honesty of the new work must change in response to its new environment.”

The location for this year’s performance was intentional.

“We’re putting dance inside of an academic pavilion,” Powell said. “Dance is also academics — it’s showing that. As much as Elon holds up academia, dance is also right there in the mix. We want to put them side by side and share the same space.”

Powell said the performance was intended for audience members to meet outside Lindner Hall and travel through the landscape, viewing performances choreographed by four faculty members and four student choreographers.

Senior Lauren Jacobbe came to Elon injured four years ago, which made her unable to participate in Dancing in the Landscape her freshman year. She said she was looking forward to the opportunity to perform this year. Though she said she is heartbroken by the news of the cancellation, she recognizes why.

“The fact that we don't get the chance to perform it live is really just heartbreaking,” Jacobbe said. “There's also the fact that the circumstances are obviously so out of our control. We're talking about weather, and we're also talking about a natural disaster that is hitting a part of our country, damaging and causing so much more harm in other areas. So I think that's very important to recognize, and I think most of us do recognize the fact that we can't control that.

Jacobbe said she learned the news of the cancellation when she received the email from Vice President of Student Life Jon Dooley Sept. 28.

Powell’s email to dancers came after the announcement from Dooley.

“This is one of the four performances that we can potentially have through the Elon dance program,” Jacobbe said. “Now we kind of felt like one of those four just got ripped away from us, which is really sad.”

For faculty choreographers Kate Shugar and Brianna Forbes, their pieces are influenced by their own lives and the world around them.

“Right now, I’m in a season of my life that is full of feels like endings, and I think the piece explores that mixed emotion that you have that’s one part nostalgia for what’s ending, what you’re leaving, a little bit of fear, a little bit of excitement for what’s ahead, even though you’re not quite sure what that is,” Shugar said.

Shugar worked with students she doesn’t teach in the classroom, something she said has embraced the entire process. Her piece featured partner work to depict the concept of beginnings and endings.

“I feel like this piece — it just couldn't exist anywhere else,” Shugar said. “You have some site works that are more site adaptive, and so they can be adapted to different sites and then you have really site-specific pieces where I mean, that's exactly what it is. It's specific to this particular place, and it couldn't exist in the same way anywhere else.”

Forbes, like Shugar, pulled from her life experiences, creating a piece about relationships and connections.

“I wanted my dancers to be able to connect with the thought of, OK, you're in college — this is a time in your life where you need several different people to walk with you,” Forbes said. “You need your professors to walk with you in a certain way. You may need to lean on your parents to walk with you in a certain way to get you through things and even your friendships. This is more of a piece about focusing on the people who you need the most right now in life to help bring you back to life to help you flourish and thrive and become your best whole.”

Junior Jessica Werfel said as much as the inspiration for her piece came from her own experiences, it also developed from the location it was set to be performed in — the Meditation Garden, a place on campus sacred to her.

The selected piece that Werfel choreographed is a solo that follows the journey of self-growth.

“She uses the walls as a barrier that she wants to get back in but never goes back in, and then at the end, she turns and decides which path she wants to go on,” Werfel said. “I really use the brick and what the space means to various people to help influence my work.”

This year’s Dancing in the Landscape would have been senior Eileena Boyce’s first time showing her own work at Elon. She said the piece she created follows the difficult journey of every individual. Her three dancers pull from personal experiences to show that while one feels alone in their journey, there are others having the same feelings.

“I’m leaving my mark,” Boyce said. “The stories they’re telling have a personal meaning even to me of things that I’ve gone through in my time here that I can’t put into words, but I can definitely put into the movement.”

Dancing in the Landscape marked Powell’s directing debut at Elon. She said no matter what happens this weekend, the experience and process will be memories she will cherish.