The leaked opinion, which Chief Justice Roberts confirmed the validity of May 3, could overturn the landmark decision in Roe v. Wade 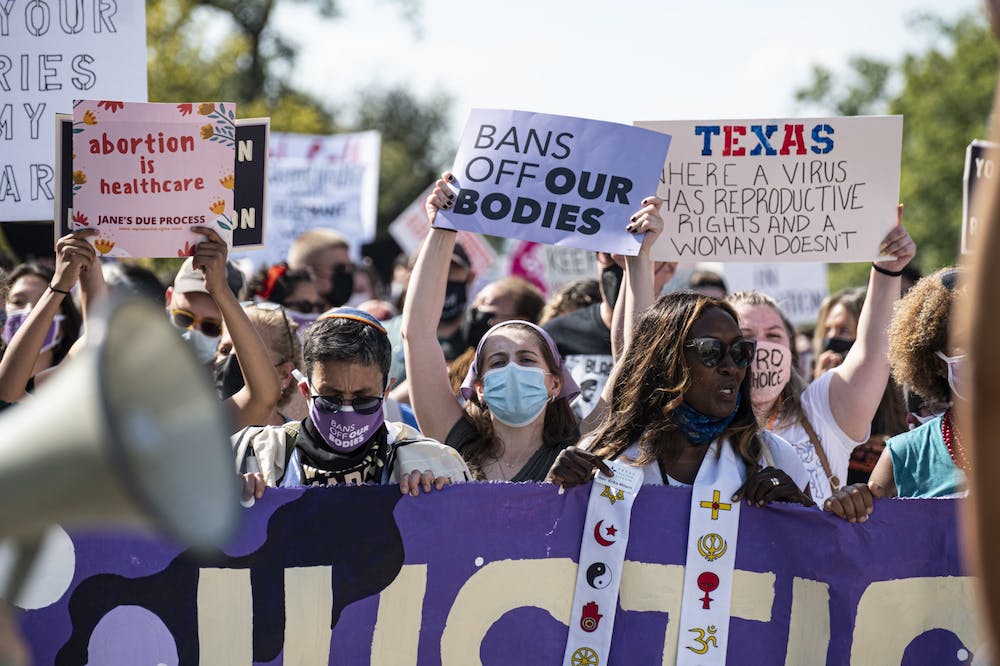 Pro-choice protesters march from Freedom Plaza to the Supreme court on October 2, 2021 in Washington D.C. during the Women's March for abortion freedom. by Luke Johnson

The Supreme Court privately voted to overturn Roe v. Wade, according to an early draft of a majority opinion obtained by Politico. The draft is not a final decision.

Chief Justice John Roberts issued a statement on May 3 and confirmed the leaked decision but said the decision is not final. He called the leak a “betrayal” and “egregious breach.”

The majority opinion draft, written by Justice Samuel Alito, could strike down the landmark ruling in Roe v. Wade. Thirteen states already have trigger laws in place that would immediately go into effect if Roe v. Wade is overturned.

Elon News Network requested a statement from Elon University President Connie Book on May 2. Elon University Chief of Staff Patrick Noltemeyer, on behalf of the president's office, said Book will not make a statement, as the "facts surrounding this issue are still emerging."

"As a learning community, we encourage everyone at Elon to educate themselves on the multitude of viewpoints on important issues such as this so they may maintain informed perspectives," Noltemeyer wrote in an email to Elon News Network .

Junior Kasey Fountain said when they heard the news last night, they weren't entirely sure how to feel about it.

“If I'm honest, I wasn't surprised, which made me sad,” Fountain said. “Growing up in this generation, it's like one thing after the other, and I don't even know if I have the capacity to feel shocked or angry anymore.”

Junior Juliana Schiano found out about the news Tuesday morning, when she received a text message from Fountain. As a woman and non-binary identifying individual, Schiano said the news hit close to home.

“The rights of millions and millions of women, and people who don't identify as women but still have uteruses or would be affected by these reproductive laws, are being determined by not even nine people, but five,” Schiano said. “And three of those five people were elected by one person during a four-year span and have the ability to change laws and all of those things for the entirety of the time that they choose to be on the court.”

Some in the Elon community agree with the opinion expressed in the draft. President of Elon University’s College Republicans and senior Daniel Dorociak said he agrees with the draft, as he relies on the values he grew up with.

“I’ve been raised Catholic, I still am Catholic, so my belief is I’m very much pro-life,” Dorociak said.

Senior Maria Mendoza has been studying abortions at Elon University for a while now, with her research focusing on the “Impact of Abortion Clinic Closures on Evictions.” Mendoza said she has always been for abortion rights, and when she found out the news about the leaked draft decision, she said she was sad but also not surprised.

“Ever since Ruth Bader Ginsburg passed away and they had to replace her, the majority of Supreme Court justices kind of gravitated more conservatively. I knew this would happen,” Mendoza said. “It is very disheartening, and it's very sad.”

The majority draft opinion is not the final outcome, but attorney and community organizer Jamie Paulen said that if Roe v. Wade is overturned, it will mean different outcomes depending on what states people live in. Though various bills that would restrict access to abortion in North Carolina have passed through the state legislature in recent years, Gov. Roy Cooper has vetoed all of them. Attempts to override the vetoes failed to receive three-fifths of the vote in each chamber.

“The people who are not going to be able to access what many women, including myself, consider to be essential medical treatment, are going to be poor, Black, brown, rural and gender non-conforming people are the ones who are going to have the inability to get this life saving medical care,” Paulen said.

Mendoza said for those who are interested in learning more about this unprecedented situation, she suggests people educate themselves on what is happening, especially when it comes to the reproductive rights of women.

“Obviously we know what happens when you don't have access to abortion,” Mendoza said. “You will have to continue a pregnancy. Maybe you can give up the baby for adoption, but that's not always a possibility.”

With protests breaking out across the country in response, Roberts directed the Marshal of the Court to launch an investigation into the leak on Tuesday morning. The final decision will likely not be published until the end of the court’s term.