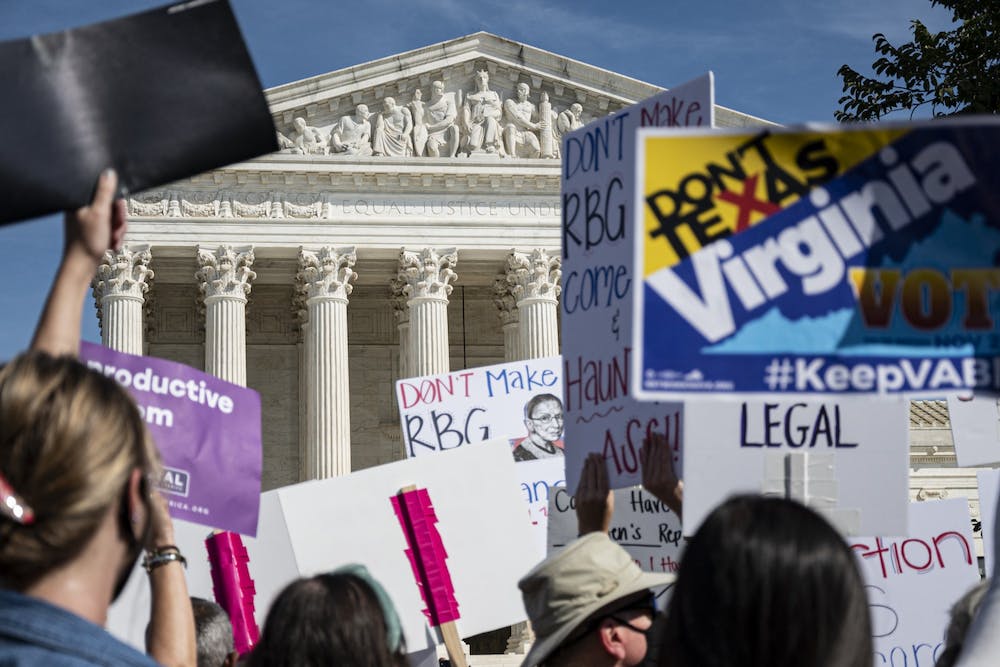 Photo by Luke Johnson | Elon News Network
Abortion-rights protesters hold signs at the Supreme Court during the Women's March in Washington, D.C., on Oct. 2, 2021. A majority Supreme Court draft opinion leaked to Politico on May 2 suggests that the court is set to overturn the 1973 ruling of Roe v. Wade, which protected a pregnant women's ability to have an abortion.

Updated as of May 3, 2022 at 1:54 p.m. to include additional information from Elon University Chief of Staff Patrick Noltemeyer on behalf of the president's office.

The Supreme Court privately voted to overturn both Roe v. Wade and the subsequent Planned Parenthood v. Casey, according to an early draft of a majority opinion obtained by Politico. The draft is not a final decision.

The majority opinion draft, written by Justice Samuel Alito, could strike down the landmark ruling in Roe v. Wade. Thirteen states already have trigger laws in place that would immediately go into effect if Roe v. Wade is overturned.

Chief Justice Roberts has issued a statement and confirmed the leaked decision, but said the decision is not final. He called the leak a “betrayal” and “egregious breach.” Roberts has directed the Marshal of the Court to launch an investigation into the leak.

Though various bills that would restrict access to abortion in North Carolina have passed through the state legislature in recent years, Gov. Roy Cooper has vetoed all of them. Attempts to override the vetoes failed to receive three-fifths of the vote in each chamber.

In a joint statement, House Speaker Nancy Pelosi (D-CA) and Senate Majority Leader Chuck Schumer (D-NY) wrote, “If the report is accurate, the Supreme Court is poised to inflict the greatest restriction rights in the past fifty years, not just on women but on all Americans.”

Elon News Network requested a statement from Elon University President Connie Book on May 2. Elon University Chief of Staff Patrick Noltemeyer, on behalf of the president's office, said Book will not make a statement, as the "facts surrounding this issue are still emerging."

"As a learning community, we encourage everyone at Elon to educate themselves on the multitude of viewpoints on important issues such as this so they may maintain informed perspectives," Noltemeyer wrote in an email to ENN.