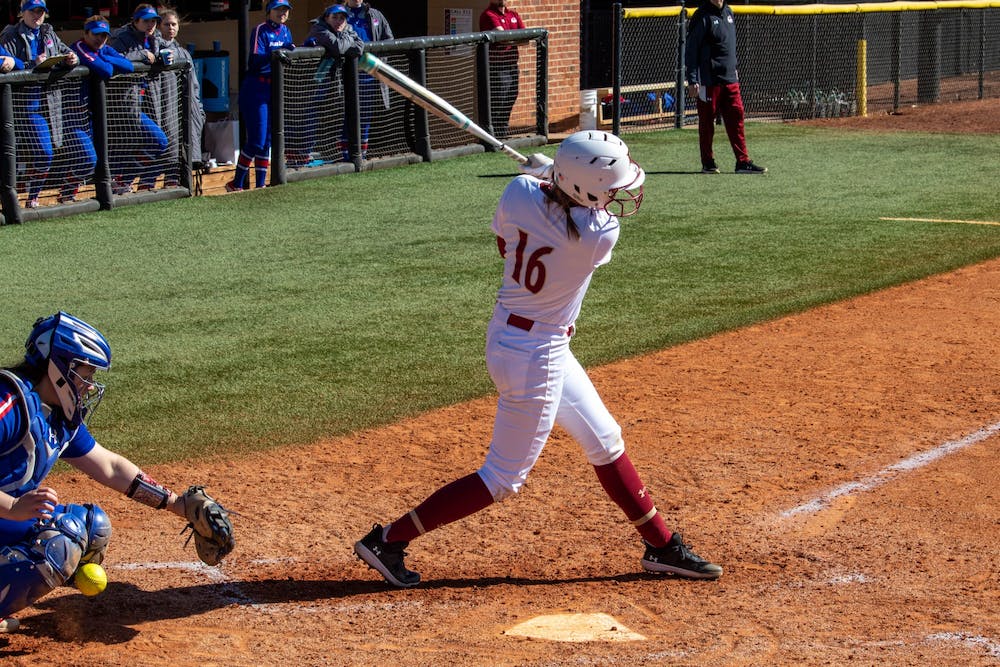 Photo by Joseph Navin | Elon News Network
Elon Junior Claudia Penny (16) misses the softball during the game against the University of Massachusetts Lowell on Feb. 19 at Hunt Park. Elon lost 0-3.

In a game not added to its schedule until last Friday, the Elon University softball team lost 11-3 to the #19 University of Michigan Wolverines.

Elon was originally not supposed to play today, but the game came together as Michigan wanted to add a game while on its spring break road trip in North Carolina. The Wolverines competed in the Duke Invitational in Durham last weekend and will play at the University of North Carolina-Chapel Hill tomorrow.

Michigan entered the game ranked 19th in the National Fastpitch Coaches Association top 25 poll and is coached by Carol Hutchins, who is all-time winningest coach in NCAA Division I softball history with 1,678 wins, including Michigan’s win over Elon.

“Playing with Carol Hutchins as the coach across the field is an honor,” sophomore third baseman Gabi Schaal said. “That’s softball history in the making right there and it’s just an honor to play against a coach like that and a program like that.”

Elon fell behind 6-0 after the first two innings and trailed 11-0 after four. Head coach Kathy Bocock said the early deficit was difficult to overcome against a team as strong as Michigan.

“We didn’t come out and do what we needed to do,” Bocock said. “[Against] teams like this, you just can’t give up runs easy and early.”

Freshman pitcher Taylor Cherry started for Elon but was replaced in the second inning by senior Alexa Nemeth after allowing five runs. Seven of Michigan’s 11 runs came with two outs, including each of the first six.

“One of our biggest things right now is … we’re getting two outs, but that’s where we’re giving up a lot of our runs and we’ve got to fix that,” Bocock said.

Elon’s lone bright spot-on offense came in the bottom of the fifth inning, when Schaal hit her third home run of the season to left field against Michigan freshman pitcher Emerson Aiken, scoring three runs to make the score 11-3.

“She was a young pitcher and she had been struggling a little bit with the batters in front of me,” Schaal said. “I saw a pitch I liked, so I took a swing.”

Despite Schaal’s home run, Elon needed one more run to extend the game past five innings, as the NCAA invokes the mercy rule — which immediately ends a game — when a team holds a lead of at least eight runs at the end of the fifth inning. With two outs, freshman left fielder Kaitlyn Wells struck out swinging to end Elon’s night.

While disappointed with the loss, Schaal said it was great for Elon to host Michigan, a national championship-winning program.

“That’s kind of where we want our program to go into the future,” Schaal said.

Elon returns to Hunt Softball Park on Mar. 2 for a game against North Carolina State University. This will be Elon’s third game against an Atlantic Coast Conference opponent this season, as the Phoenix defeated UNC-Chapel Hill on Feb. 16 and fell to Duke University on Feb. 23.