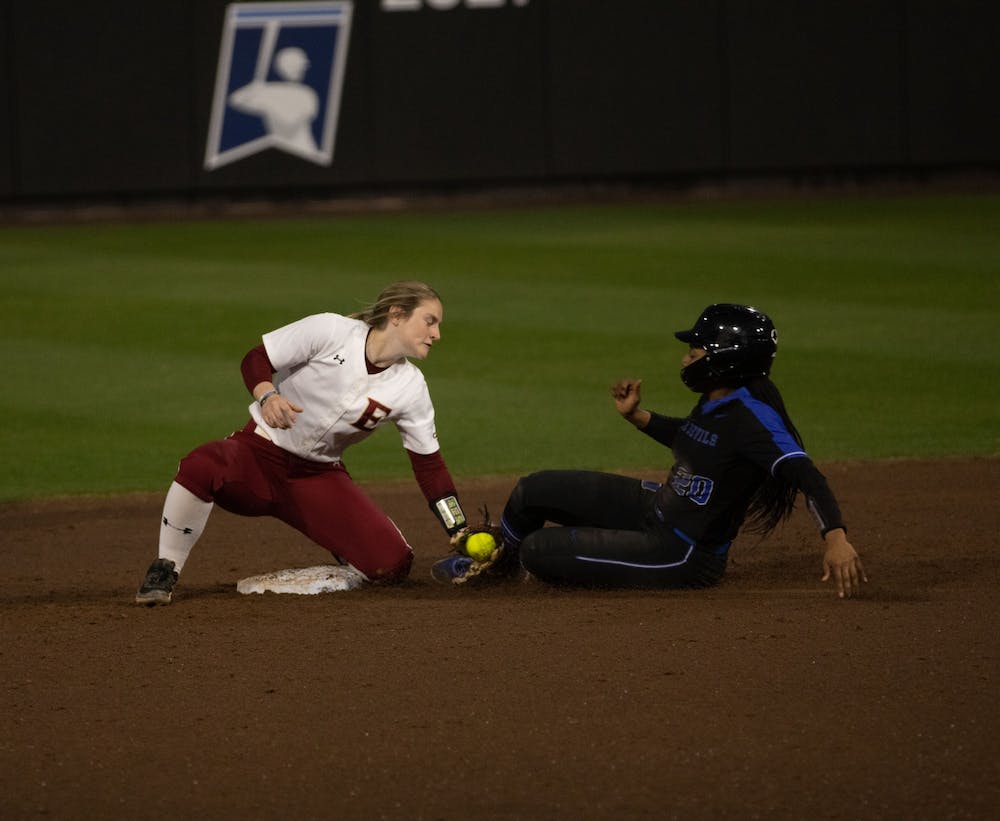 The Elon University softball team fell 5-4 against the Duke University Blue Devils on Feb. 23, as a late home run by Duke proved costly for Elon.

The teams entered the bottom of the sixth inning tied at 4-4. With two outs, Duke first baseman Rachel Crabtree hit a solo home run to put the Blue Devils ahead for the first time in the game.

Junior second baseman Drew Menscer hit a two-out single in the top of the seventh inning to keep Elon alive; but junior shortstop Megan Grant hit a pop fly to the infield in the next at bat to end the game.

“Our girls came to compete and that’s the thing about our team. They’re not afraid to go up against anybody,” head coach Kathy Bocock said.

The Phoenix scored four runs in the top of the second inning to take a 4-0 lead. The first came when Duke pitcher Claire Davidson walked Menscer with the bases loaded. The Phoenix added another run when Grant ripped a single to left field to score Menscer. A single from sophomore third baseman Gabi Schaal scored two more runs for Elon to conclude the inning.

“I was just trying to find a pitch that I knew I could hit hard and work to a full count and then I saw that pitch and just put the bat on it,” Schaal said.

Duke retaliated with four runs of its own in the bottom of the third inning. Outfielder Caroline Jacobsen got Duke on the board with a three-run home run and, in the next at bat, second baseman Kristina Foreman hit a solo home run to make the score 4-4.

Duke entered the game with 22 home runs in its first 10 games. Bocock said Duke’s adaptability at the plate was difficult for Elon to deal with.

“The biggest thing about them is they adjust quickly and they make things happen,” Bocock said. “If we can’t get the pitches that we’re trying to get, they’re going to adjust and they’re going to hurt you on those things.”

Bocock said she was proud of Cherry for steadying herself after allowing the two home runs in the third inning.

“She pitched an incredible game,” Bocock said. “She’s upset with herself and I’m OK with that, because that means I have competitors on my team and they’re not OK with losing.”

Duke, the defending Atlantic Coast Conference champions, entered the game ranked 14th in the USA Today top 25 poll. After beating the University of North Carolina-Chapel Hill on Feb. 16, Schaal said Elon’s performance tonight was another indication of the team’s potential.

“We knew Duke was going to be a good team, and I think our philosophy this year is if we stay together, we can accomplish anything, as seen with UNC,” Schaal said.

Elon (7-3) looks forward to a three game series over the weekend against St. Bonaventure University, with two games on Saturday and another on Sunday at Hunt Softball Park.