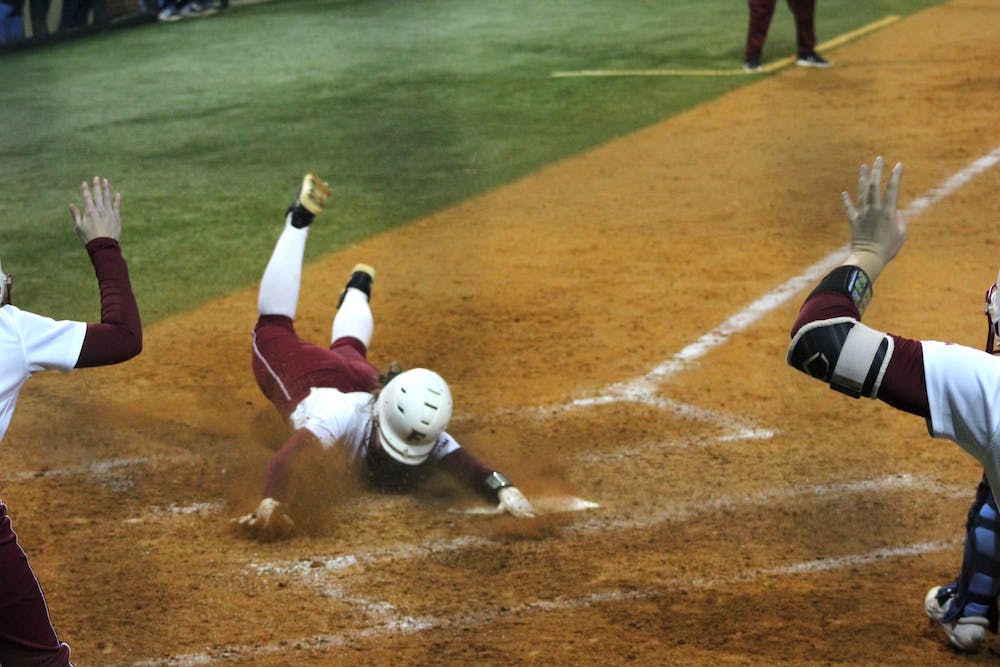 Elon continues its season opening nine-game homestand on Friday, Feb. 18 with a pair of games against the Providence C Friars. The first game will begin at 1:30 p.m. and the second game will start at approximately 3:45 p.m.

The Elon University softball team rallied in the bottom of the seventh inning to earn a 4-3 comeback win against the University of North Carolina Tar Heels on Feb. 16.

Elon freshman outfielder Kaitlyn Wells delivered the game-winning hit in the bottom of the seventh. With no outs, she stepped up to the plate with the bases loaded and hit a high fly ball to center field on the first pitch of the at-bat.

It looked as if North Carolina’s center fielder would make the catch, but she ran into the outfield wall and dropped the ball. Senior outfielder Allie Eith scored to tie the game and sophomore third baseman Gabi Schaal rounded third to score the winning run for Elon.

“I was just really excited to be able to step up for my team in that moment and get the job done,” Wells said.

Head coach Kathy Bocock said she felt confident heading into the bottom of the seventh inning with the top of the team’s lineup — junior utility Megan Grant, senior outfielder Rebecca Murray and Schaal — due up to bat.

“We were in the right spot, where we needed to be,” Bocock said. “Anytime you’re coming up to the bottom of the seventh, down one with the top of the lineup, your chances are pretty good.”

Freshman pitcher Isley Duggins made her first career start for Elon after two strong relief performances last weekend against Indiana University-Purdue University Indianapolis. However, she allowed the first runs of her career in the top of the first inning, as North Carolina took a 3-0 lead with a two-out home run to center field.

Elon’s offense responded in the bottom of the second inning, as freshman outfielder Chloe Hatzopoulos hit her first career home run to center field to cut UNC’s lead to 3-1. Elon added another run in the bottom of the fourth when junior utility Drew Menscer scored on a wild pitch.

After the difficult first inning, Duggins pitched six shutout innings to finish the game, allowing just three hits over that span. Bocock said she was proud of her for bouncing back and said the team’s defense also improved throughout the game.

“Everybody settled in. The defense settled in behind her, we made some good plays,” Bocock said. “We were heads up on some of their running mistakes. We were paying attention and we capitalized.”

“We were starting to get on their pitchers a little bit,” Bocock said. “That’s what we’re trying to do is have some quality at-bats and just keep competing in the box and putting pressure on people.”

Elon has now won four of its last five meetings against UNC and is 4-0 for the first time since 2019. Bocock said this an important victory for the team’s confidence going forward.

“It’s a good win for us,” Bocock said. “It’s a compliment to UNC because we have to play our best to beat them and we were able to do that today.”

Elon continues its season opening nine-game homestand on Friday, Feb. 18 with a pair of games against the Providence College Friars. The first game will begin at 1:30 p.m. and the second game will start at approximately 3:45 p.m.