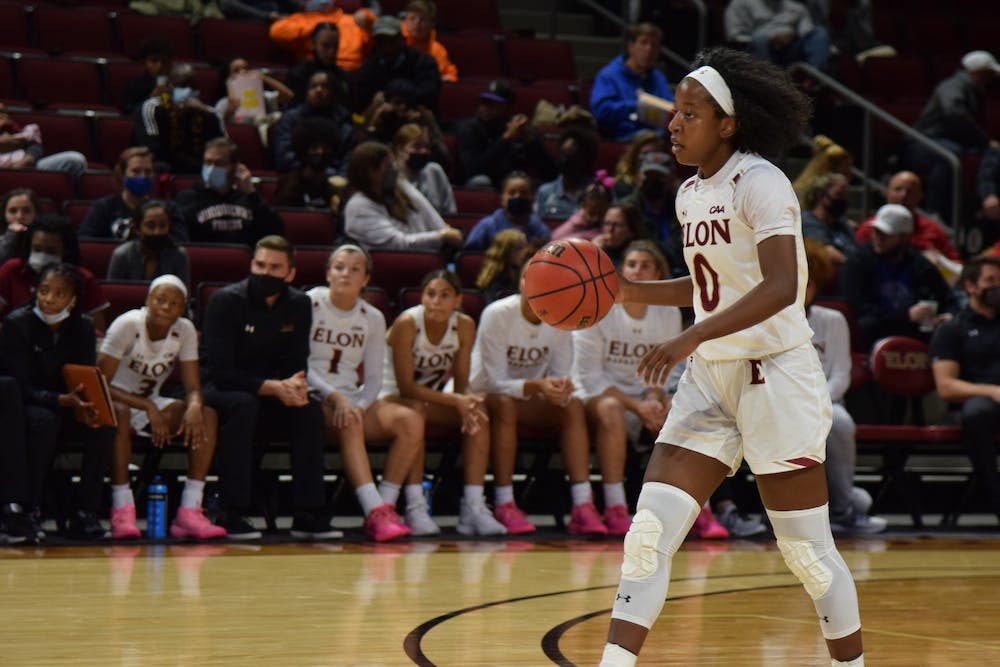 Photo by Kyra O'Connor | Elon News Network
Brie Perpignan leads the team in scoring through six games this season, averaging 13.8 points per game. While several in the program view her as a leader, she said everyone on the team plays a leadership role — no matter their age or experience.

Senior guard Brie Perpignan has been a leader for Elon University’s women’s basketball for the last four seasons. After the team’s last season was shortened due to COVID-19, Perpignan said she is excited to be back on the court.

“I’m just excited to play all of our games we do have on the schedule, and it’s something we’re really looking forward to,” Perpignan said.

Head coach Charlotte Smith said Perpignan has been a leader for the program from the very first day she arrived on campus.

“Brie’s always been a leader for us,” Smith said. “Brie brings great energy to practice every day. She brings a smile on her face every day. She's done a great job of leading this team in the preseason, holding people accountable, being fearless and stepping up.”

Perpignan leads the team in scoring through six games this season, averaging 13.8 points per game. While several in the program view her as a leader, she said everyone on the team plays a leadership role — no matter their age or experience.

“Even our younger players,  they're still leaders themselves,” Perpignan said. “We hold them to the same accountability that the seniors are held to also. So we don't really look at them as younger players. They’re still just other players on the team just like us.”

Elon holds a 5-1 record this season, with the only loss coming to the University of South Carolina, currently ranked number one in the country. Perpignan said the group works to create a positive environment for one another so they can grow as a team.

“We're all lifting each other up, elevating each other every day and practice on the court and off the court,” Perpignan said. “So just being out there with my team is like, we're just a team.”

Going into her final season at Elon, Perpignan said she has created some great memories and is looking forward to having more this season.

“My favorite memory is probably just freshman year coming in here to the Schar Center and learning the whole Elon atmosphere and learning my teammates, especially the people I came in with,” Perpignan said.

As Perpignan continues her senior season, she said teamwork is what she values most and believes this year’s team works very well together.