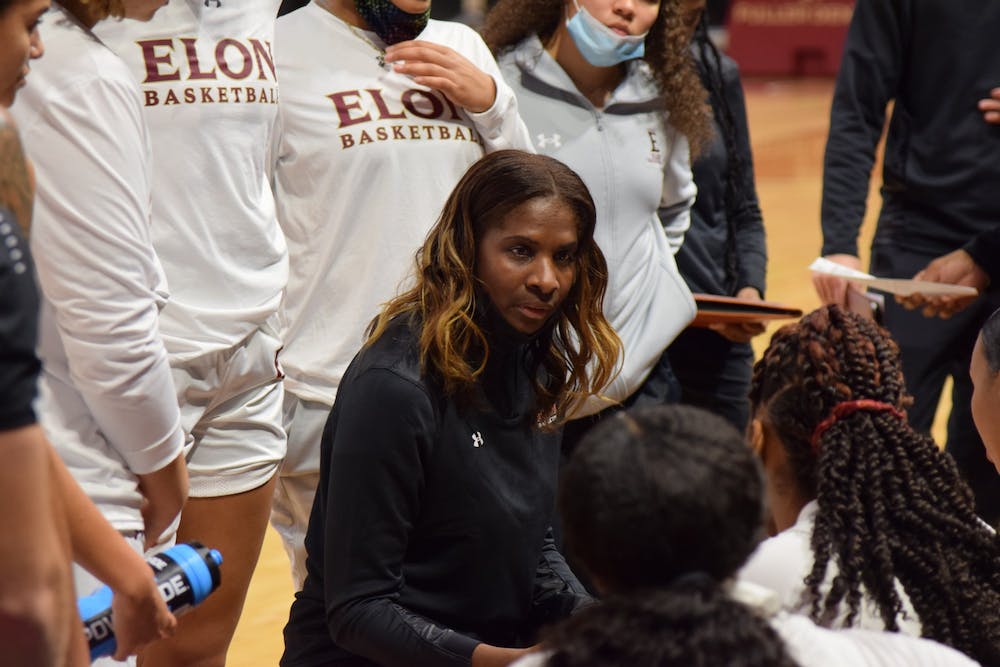 “We’re extremely excited to keep the winning streak going,” Smith said. “We’re just happy to come out with the win and we want to keep it going.”

The energy on the court was high as Elon took control of the first quarter from the start, winning the jump ball and scoring in the first 15 seconds. Senior guard Kayla Liles scored the first points of the game, followed by scores from senior center Evonna McGill and junior guard Vanessa Taylor.

Taylor’s role in the game tonight was to stop the ball and she excelled, according to Smith.

“When she went out of the game you felt her absence in the game because we didn't have the ball stopper,” Smith said. “That was key for us defensively, is her putting pressure on the point guards.”

The Phoenix ended the half with a 37-31 lead, but lost some of its momentum late in the second quarter. The score halfway through the fourth was a neck and neck 60-50, with the Phoenix bringing the intensity fans saw in the first quarter back to the court to hold onto the victory.

With just under seven seconds left on the clock, McGill, who scored 16 points, went down and had to be walked off the court by two Elon University Athletics staff members. Seconds after the senior center made it off the court, the Phoenix won the game, 76-66.

Redshirt senior guard Ariana Nance led the Phoenix in scoring with a career high 19 points. Four of Elon’s five starters scored in double digits and the team shot over 50% from the field.

For Smith, winning tonight’s game was a relief. Smith said while she didn’t know about the record at first, she felt nervous heading into this evening’s game.

“This is never, ever done alone,” Smith said.

Looking back at her 173 wins, Smith said she is most grateful for the wins last season, when the team battled through games and a pandemic.

“Those seven wins out of the 173 are probably some of the most precious wins to me,” Smith said. “Because they could have bowed out, said we don't want to play season, but they decided they wanted to play and were very resilient last season.”

Senior guard Brie Perpignan said the team loves celebrating both wins and one another, and the game tonight allowed them to do both. Smith’s record is a testament to who she is on and off the court, Perpignan said.

“She cares about us in more ways than one,” Perpignan said. “You’ll never forget the impact she’s had on each and every one of us.”

“It’s a fun moment,” Smith said. “You have nothing to lose and everything to gain.”