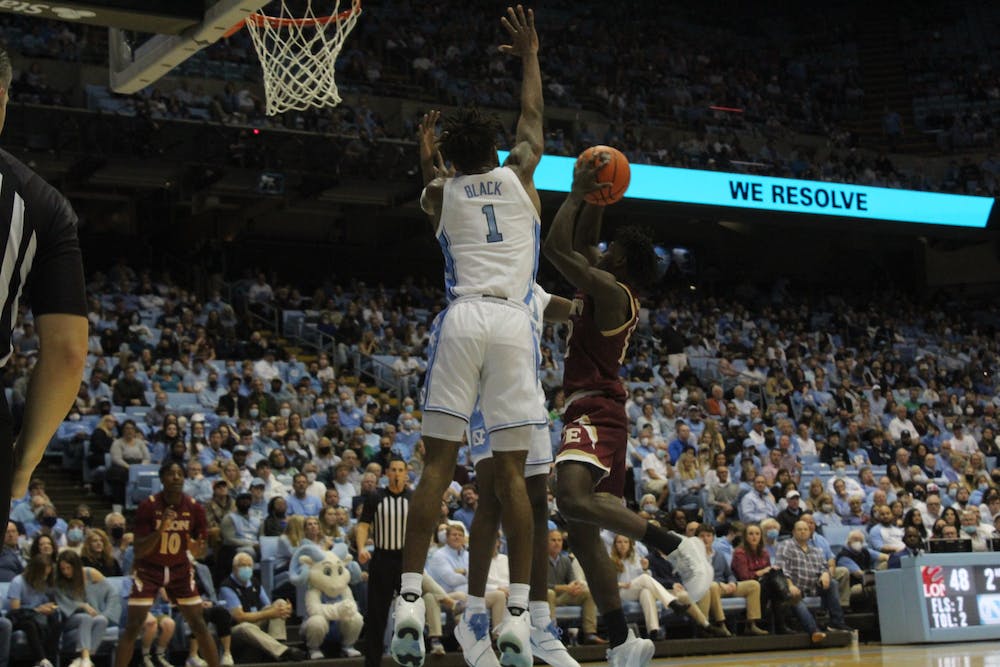 Despite the loss, Head Coach Mike Schrage said this was one of the team’s best overall performances of the season.

“We came here expecting to compete and win,” Schrage said. “I’m proud of our guys, probably the most proud I’ve been over the course of a 40 minute game.”

Elon trailed by just eight points at halftime, but was unable to keep up with North Carolina in the second half, as they were outscored 43-34 in the final 20 minutes.

“They kind of imposed their will at the start of the second half,” Schrage said. “They hit some big shots to create some separation in the game.”

Junior guard Hunter McIntosh led the Phoenix in scoring with 13 points, 10 of which came in the second half. Sophomore guard Darius Burford also scored in double-digits, posting 11 points.

Elon struggled with North Carolina’s height and athleticism, as the Tar Heels doubled the Phoenix in rebounds, 48-24. North Carolina also got to the free throw line 35 times, compared to just nine for Elon.

Schrage said he was unhappy with the foul differential and said the Phoenix should have had more attempts from the free throw line. However, Schrage said was pleased with the way the offense tried to score the ball in the paint instead of settling for contested jump shots.

“It was tough tonight, that kind of differential is tough to make up,” Schrage said. “We were trying to drive the ball and post the ball and I thought we were more deserving.”

North Carolina’s dynamic guard duo of Caleb Love and RJ Davis also gave Elon’s defense significant problems, as the two combined for 33 points on the night. Schrage said the team defended them well, but were unable to contain them completely.

“They’re in a rhythm, they’re shooting the ball at an incredible level,” Schrage said. “Caleb has unlimited range, we made him take tough shots for the most part.”

Senior forward Chuck Hannah made his first start of the season for the Phoenix. He returned to the team’s lineup on Dec. 4 after missing the team’s first eight games. He scored seven points but fouled out after 17 minutes of action.

“He’s our leader, he’s our glue guy,” Schrage said. “We haven’t been getting the results we want, so everything’s on the table. We’re trying to figure things out. I think that’s got to be a solution for us going forward against the right personnel.”

With the loss, the Phoenix falls to 4-22 all-time against the Tar Heels and have still not won in the series since 1918.

Elon (2-8) will return to action on Dec. 15 for a game against Winthrop University. The game at Schar Center will begin at 7 p.m.

Missed the game? Check out our half-time coverage here: