Elon got its Schar Center sellout against UNC. But will it happen again?

Now that the UNC game is over, Elon's next challenge is to maintain excitement for sporting events in its new arena 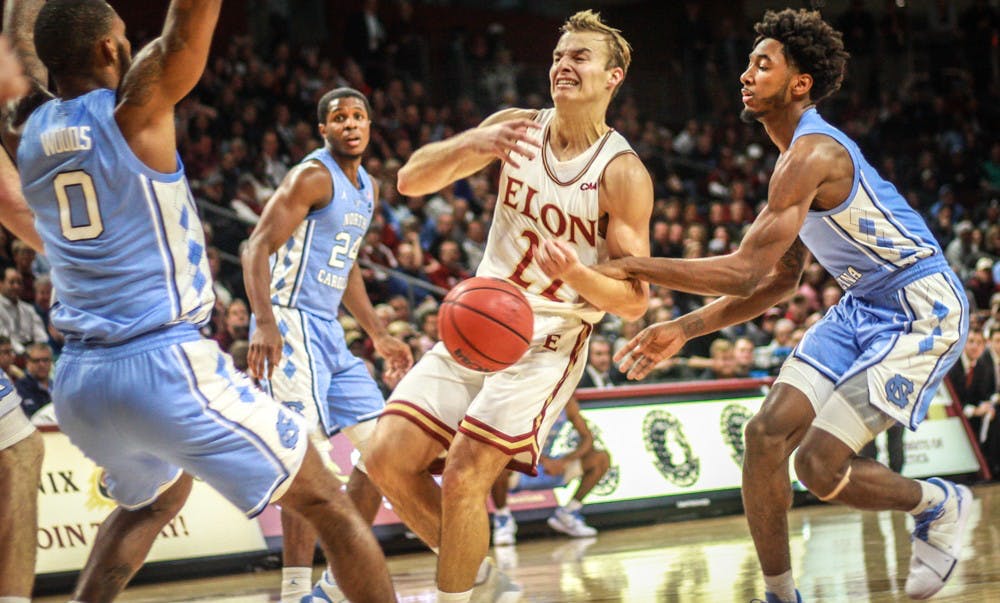 
Guard Steven Santa Ana is fouled on his way to the basket. [Abby Gibbs]

The last time Elon University beat the University of North Carolina at Chapel Hill in basketball was roughly a century ago — Feb. 15, 1918, to be exact.

For perspective, World War I was still raging, Babe Ruth dominated the baseball diamond and Nelson Mandela was not even born yet. Simply put, a lot has changed since then.

Perhaps the most drastic change was the backdrop where the game was played. In 1918, the Tar Heels and Phoenix played in West Dormitory, one of the oldest structures on campus. On Friday, the teams played in the newest one.

From a pure basketball perspective, The Phoenix’s 116-67 loss against the Tar Heels was not pretty. Pick any statistic, and it shows just how overmatched and outplayed Elon was against No. 8 UNC.

UNC head coach Roy Williams is a legend because his teams are known to stay consistent and level-headed despite an opposing scoring run here or there. Elon guard Steven Santa Ana,  forward Tyler Seibring and guard Sheldon Eberhardt all played well and scored in the double digits. But it takes more than a few hot hands to beat a team like the Tar Heels.

But what Elon can take pride in is how it responds to this. There’s no shame in losing to a program as storied as Carolina. The very fact UNC played them was a win for the Phoenix inand of itself.

In the past two months, Schar Center hosted the inauguration of Elon’s first woman president and an athletic contest with a team that could very well win a national title. On Friday, Schar Center exceeded its capacity, with 5,245 fans packing into an arena only made to seat 5,100.

That’s no small feat — Elon students are notorious for lacking school pride at athletic events. And while it’s true that local residents from Burlington and Greensboro played a factor in that number, Friday showed the potential Schar Center has for future events.

The spectators who watched Elon beat UNC 28-21 in 1918 couldn't have imagined what the campus would look like now. Five years after that game, West still stood after surviving the fire that engulfed every other structure of the small college. Now Elon has an arena so state-of-the-art that Ed Doherty, chair of the board of trustees, hinted that it could host a presidential debate.

But thoughts of hosting a presidential debate can even happen, Schar Center will host 15 more home men’s basketball games this year. The UNC game is over — and so is that marquee name that drew so much attention and fanfare since the game was announced in March.

It’d be a stretch to say Elon will never sell out the center again. But it’ll be hard to boost fan excitement for lesser-known opponents such as Milligan College and Canisius College, that are scheduled to play in Schar Center soon. The men's and women's teams both have a chance to be competitive in the Colonial Athletic Association. But it’s up to the athletics marketing department and student body to continue the momentum and put fans into seats at so they can see that happen firsthand.

The 100-year-old trend didn’t break on Friday. But maybe a newfound trend of school spirit and enthusiasm has started instead.