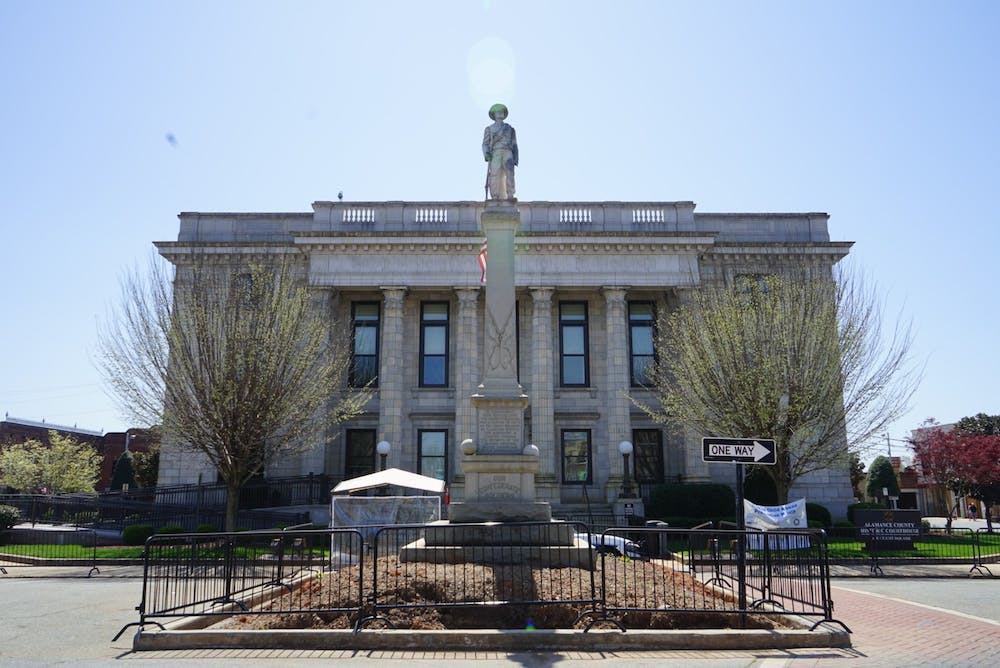 Photo by Grace Terry | Elon News Network
The Confederate statue is located in downtown Graham, North Carolina in front of the Historic Courthouse.

Alamance County is up against a lawsuit over the Confederate soldier’s monument in Graham. The North Carolina NAACP and other advocacy groups filed the lawsuit in Alamance County Superior Court Tuesday, March 30 to have the monument removed.

The state and local NAACP, Engage Alamance, Down Home North Carolina and five residents of Alamance County have filed the lawsuit against the County Commissioners to remove the Confederate monument, which stands about thirty feet high in front of Alamance County’s Historic Courthouse. The 41-page document says the monument violates the North Carolina State Constitution by inciting violence against tax payers and memorializes slavery.

“Crowning the monument is a generic, idealized, embodiment of the insurrectionists who fought in favor of secession for the South which would continue the practice of slavery and of Black individuals: a solider depicted in white marble,” reads the lawsuit.

One of the plaintiffs is non-profit organization Down Home North Carolina, which works to support underprivileged citizens in rural areas and small towns. Todd Zimmer, one of the co-founders and co-directors of the organization, said Down Home became involved in the lawsuit to make Alamance County a safer place for Black residents.

“We think it’s very important that everyone in Alamance be able to live free from fear and be able to conduct their business, to have the expectation of equal treatment in the courts,” Zimmer said. “This monument is creating a barrier to people’s safety, and it’s connected to a really violent and disruptive history.”

The monument’s location in front of the courthouse has sparked additional controversy due to its proximity to the site of the 1870 lynching of Wyatt Outlaw, a Black councilman in Graham who was kidnapped and killed by the Ku Klux Klan.

Zimmer said the location of the monument poses a threat to residents.

Rev. Randy Orwig, a senior pastor at Elon Community Church, is listed as a plaintiff and cited on page 14 of the lawsuit.

“According to Plaintiff Reverend Orwig, the monument’s placement in the center of the town is a ‘slap in the face’ as Graham is the ‘County seat.’ In his view, the placement represents a ‘bold-faced view that racism is okay in this County,’” the lawsuit reads.

Orwig said he is fighting to make the Alamance County community more inclusive.

“Being a clergy person in the county gave me that ability to balance the plaintiffs in terms of being representational of many clergy in the county who feel that this no longer serves our values,” Orwig told Elon News Network. “Even though there are some people who still want to call it heritage, the monument itself represents inhospitality.”

The statue has been a center of many protests, including the Burlington-Alamance March for Justice and Community protest, which took place over the summer to raise awareness for racial injustice after the murder of George Floyd and to demand the removal of the Confederate statue.

Elon University president Connie Book and Burlington mayor Ian Baltutis are among the community leaders in Alamance County who have supported the relocation, not removal, of the monument.

During ongoing protests at the monument last summer, the county released a statement arguing that they do not own the land where the monument sits therefore according to a 2015 law the “removal, relocation or altering of historical monuments” on public property is prohibited unless it’s approved by the North Carolina Historical Commission.

The Alamance County Commissioners Chairman of John Paisley did not respond to Elon News Network’s response for comment.

The fight to keep the monument up

The debate over Confederate monuments is a long-standing argument drawing various perspectives. According to a report by the Southern Poverty Law Center, by the end of 2020, North Carolina removed 24 Confederate symbols — the second highest in the country. Hereditary organizations such as the Sons of Confederate Veterans see Confederate statues as landmarks of history and aim to preserve the monuments to honor the legacy of Confederate soldiers.

The North Carolina Sons of Confederate Veterans spokesman Frank B. Powell III, who said he has been with the organization for about 36 years, said the NC SCV also condemns racial violence and hate groups.

“We condemn those groups,” Powell said. “Those same people, they also misuse the Christian cross and the United States flag. These hate groups don’t really care.”

Powell said the organization supports the Graham Confederate monument and does not believe it should be removed or relocated.

“I think it should stay where it is, it was placed by people, like I said, 100 years [ago] or more,” Powell said. “They were products of their time, they knew better than we know now. A sizable percentage of their family went off to defend North Carolina, and they didn’t return. So they wanted to honor them with a memorial.”

Powell also asserted that the organization does not view Confederate monuments as offensive and others shouldn’t.

“You do not have the right to be offended. Nobody does,” Powell said. “If you’ve got an inanimate object that’s been in place for more than 100 years and is dedicated to people who died more than 150 years ago, if that bothers you, then you got other problems besides the memorial to deal with.”