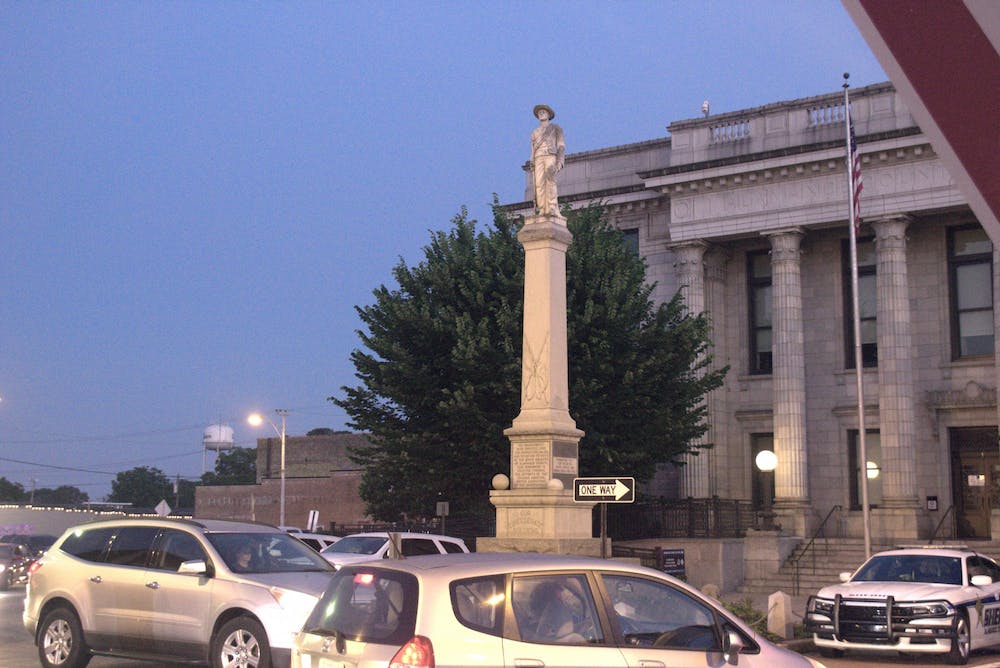 Updated June 30 at 12:59 p.m. to include the Alamance County Mutual Aid Agreement.

Elon University President Connie Book, along with President Emeritus Leo Lambert, is calling on the Alamance County Commissioners to relocate the Confederate monument that stands outside the courthouse in Graham. Book said the 30–foot monument stands as a threat to the Black community in the county.

“I want to be clear on the University’s position that members of the Black community and other people of color in Alamance County deserve an inclusive and equitable environment,” Book wrote in an email. “They deserve an environment in which they feel safe and protected by our justice system to conduct business, pursue an education, and live fulfilling lives. The Confederate Monument is a barrier to realizing this goal.”

This morning, Book presented this statement at a press conference at Alamance Foods, Inc in Burlington. Book is joined in signing this letter with dozens of other leaders in Elon and Alamance County including Elon Aldermembers Emily Sharpe and Quinn Ray as well as Mayor of the city of Burlington Ian Baltutis ’08. The letter says the monument is a threat to public safety.

“The monument’s prominent location before a house of justice, an entity which has historically failed to serve our communities of color with equality, perpetuates this symbol as a barrier to the inclusion we aspire to achieve,” the letter says.

In response, the Alamance County Board of Commissioners released a statement saying the letter from these leaders is "troubling," and claims that only four of the 56 people who signed the letter contacted the commissioners.

"We do not doubt that those who signed the letter are sincere in their beliefs and hope to see the county find a resolution to this difficult challenge," the statement said. "The best way to seek a resolution is not by operating in secret, drawing up in opposing lines, and engaging with the press."

Alamance County Attorney, Clyde Albright, has advised the county commissioners that they do not have the legal authority to relocate the monument per the North Carolina General Statute 100-2.1, the statement said.

According to the statute the monument can't be permanently removed, relocated or altered without approval of the North Carolina Historical Commission.

Exceptions to this requirement are if the mounment needs to be relocated for its preservation and if it's necessary for construction.

The Confederate monument has been a recent site of protests. On June 21, two Elon professors were photographing demonstrators at the monument when one of them — professor of comuter science Megan Squire — was assaulted.

Their presence at the monument comes after the Alamance County Sheriff’s office said in a press release the previous day that the city of Graham would not be granting permits to protest at the courthouse for the “foreseeable future.”

The American Civil Liberties Union of North Carolina sent a letter to the sheriff’s office asking them to retract the permit freeze and affirm the ability to protest.

“Your threat to arrest people for protesting without a permit, as well as the indefinite blanket refusal to issue permits, violates the most fundamental constitutional rights to assembly, speech and to be free from unlawful seizures and use of excessive force without due process of law,” the letter said.

Although protests were not permitted at the monument, according to a statement from Gerald Whittington, senior vice president, Elon University Police was not deterring protesters.

The monument was erected in 1914 by the Graham United Daughters of the Confederacy and is dedicated to the 1,100 men from Alamance County who fought in the Confederacy during the Civil War.