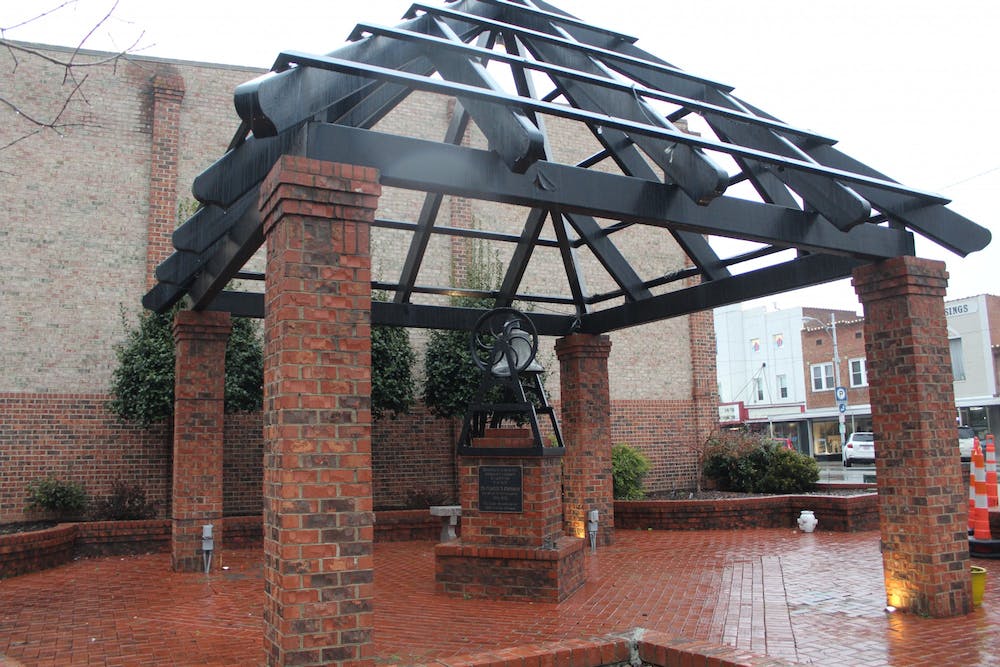 At the site where the historic bell hangs in Graham’s Court Square, just yards from where the 30-foot Confederate monument now stands, Wyatt Outlaw, a Black councilman in Graham, was lynched in 1870.

Almost 151 years ago on Feb. 26, 1870, members of the Ku Klux Klan kidnapped Outlaw in the middle of the night, and his body was found the next morning hanging from an elm tree near the courthouse. 18 men were indicted for his death, but the charges were dropped.

Now in 2021, the Alamance County NAACP is trying to memorialize Outlaw and the lynching that took place over a century ago. Alamance NAACP President Barrett Brown said the idea to formally name Sesquicentennial Park after Outlaw came about almost a month ago.

The park was already known as Wyatt Outlaw Park among Graham residents, according to Brown. He said renaming the park would be an act of solidarity on behalf of the city.

After a summer of protests against racial injustice, Brown said renaming the park would be a symbolic gesture from the city and could begin to correct past actions from city officials. One such action was the now-dissolved ordinance that prevented people from protesting at the Confederate monument. A lawsuit against Graham officials determined that the ordinance violated the First Amendment.

Members of the Graham City Council aren’t set on the idea of renaming the park, given the reason for its name in the first place. Sesquicentennial Park was built to commemorate Alamance County’s 150th anniversary on April 24, 1999. The park, which is 2,500 square feet, is covered with bricks bearing the names of residents who donated to build the park.

“I urge my friend Barrett Brown to do as what they did in 1999: find a location, raise some funds and place a memorial to the life of Wyatt Outlaw,” Mayor Jerry Peterman said at the Feb. 9 city council meeting.

All other members of the council expressed their disinterest in the idea. Renaming the park after Outlaw would take away from the original intent of the park’s name — a celebration of the county’s founding — for Councilmember Melody Wiggins.

“I don’t believe you erase one piece of history to create another. Having said that, I am 110% — hear me clear — 110% in favor of doing whatever it takes to recognize Wyatt Outlaw in this city,” Wiggins said. “He is a deserving man, and we should be acknowledging him. It has been way too late, and it has been way too long, and I believe it is up to us to make those moves.”

Brown questioned why residents in favor of renaming the park should have to compromise when people “overwhelmingly” support it.

“What that means is more capitulation. And if this [is] what people have overwhelmingly asked for, I would ask the question, ‘Why not give it to them?’” Brown said. “Why should marginalized people be constantly put in a position of having to capitulate and get less than what we’ve asked for?”

Councilmember Jennifer Talley said the city should do something for this generation to memorialize Outlaw. She said the historical marker in Graham was one way the city had recognized Outlaw.

Currently, a historical marker on South Main Street in Graham makes an indirect reference to Outlaw. The marker, which was erected in 2006, memorializes the Kirk-Holden War that took place in Alamance and Caswell counties. The marker reads:

Part of this racial violence was the lynching of Outlaw. The Kirk-Holden War was named after Gov. William Woods Holden and a pro-Union militia leader George W. Kirk, according to research by historian and Elon University emeritus professor of history Carole Watterson Troxler. After Holden directed an investigation to be done by Kirk on Outlaw’s murder and the murder of white Caswell County leader John W. Stephens, the investigation and Holden’s subsequent impeachment and removal from office became dubbed the Kirk-Holden War.

Elon University has ties to the Kirk-Holden War and the lynching of Outlaw. Jacob A. Long, the brother of Elon’s first president William Long, took part in Outlaw’s lynching, yet denied it in court — using William Long as an alibi — according to Elon’s report on history and memory at the university. Jacob A. Long was Alamance County’s chief of the Ku Klux Klan, according to Troxler’s research.

When, in 1871, J. A. Long was perjuring himself denying his involvement in Outlaw's murder, he turned to his elder brother for an alibi. J. A. Long claimed to have been asleep in his law office in downtown Graham when the assailants startled him from his sleep and to have "waked up [his] brother." "What was his name?" the Chairman of the U.S. Senate's Select Committee who was conducting the investigation asked. "W. S. Long, a minister of the gospel and principal of the high school," J. A. Long responded. 29 Years later, in 1930, J. A. Long's son, Ralph, recalled both the courage of his father in helping organize the Klan and the harmony of interests and ideas among the Long children. There was "not a semblance of a Black sheep in the half-dozen," he wrote.

An excerpt from the Elon University Fall 2020 Committee on History and Memory.

To see reconciliation in Graham and Alamance County, Brown wants officials to address the desires of marginalized communities. The city council did not take a vote on renaming the park at their Feb. 9, meeting. The agenda for their March meeting hasn’t been set, but as of Feb. 16, City Clerk Darcy Sperry said the council has not asked her to add a vote to the agenda. The agenda will be finalized March 3.

“I think that elected officials have a responsibility to protect the rights of a minority population, and I don’t think you can do that by just ignoring them and dismissing them,” Brown said. “I don’t think that’s a good example of how to build community and to live in a diverse community.”