Almost exactly a year after the CAA tournament was shut down due to COVID-19, the women’s basketball season ends once again after a 65-59 loss to Drexel University 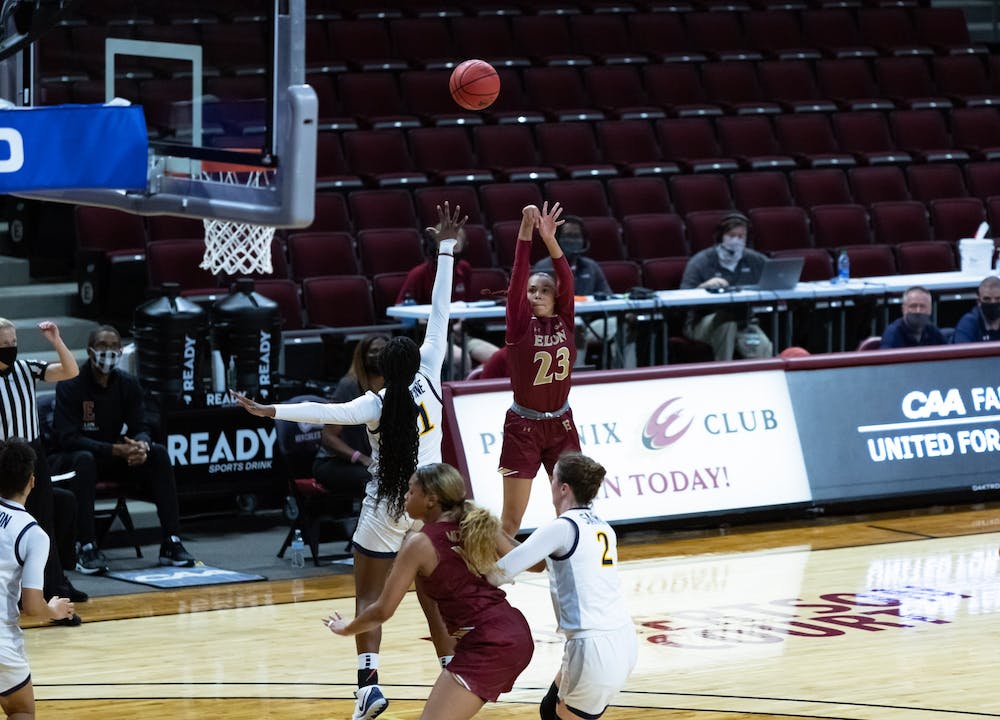 
Junior redshirt guard Ariana Nance shoots a three-pointer in the final seconds to try and give the Phoenix one last chance. Elon women's basketball would go on to lose to Drexel University 59-65 in the CAA championship quarterfinals.

Elon women’s basketball will not be advancing in the 2021 Colonial Athletic Association championship. The no. 6 Phoenix lost to the no. 3 Dragons 65 - 59 in the quarterfinals.

Despite the loss Elon head coach Charlotte Smith said she was happy with the team’s performance.

“I couldn't be more proud of this team to come out and play the way we played tonight with all the adversity that we faced throughout the season, to not have played a game since Feb. 7, that was a huge hurdle to climb” Smith said.

The Phoenix had the opportunity to host the event at Schar Center for the second year in a row after the tournament was canceled due to the COVID-19 pandemic.

Elon’s only lead came in the first minutes of the game, however, the Dragons quickly surpassed them and scored due to having multiple rebound advantages as the game progressed.

In the second half, the Phoenix were able to basket 26 more points, but ultimately were unable to keep up with the Dragons.

The Phoenix shot 28% from the 3-point line compared to their season average of 32.5%.

Coach Smith wants the players to take time moving forward to focus on their mental health.

“We're not even worried about basketball at this point in time,” Smith said. “It's just everybody just needs to take a deep breath and just enjoy life because it's been a grueling season.”

The Drexel Dragons are expected to face the James Madison Dukes tomorrow at 6 p.m. to continue with the tournament.

The loss comes just days after the men’s team lost the CAA championship and a spot in the NCAA’s March Madness tournament to the same school.