The season is over for Elon men’s basketball after losing 56-63 to Drexel University, advancing the Dragons to the NCAA March Madness Tournament 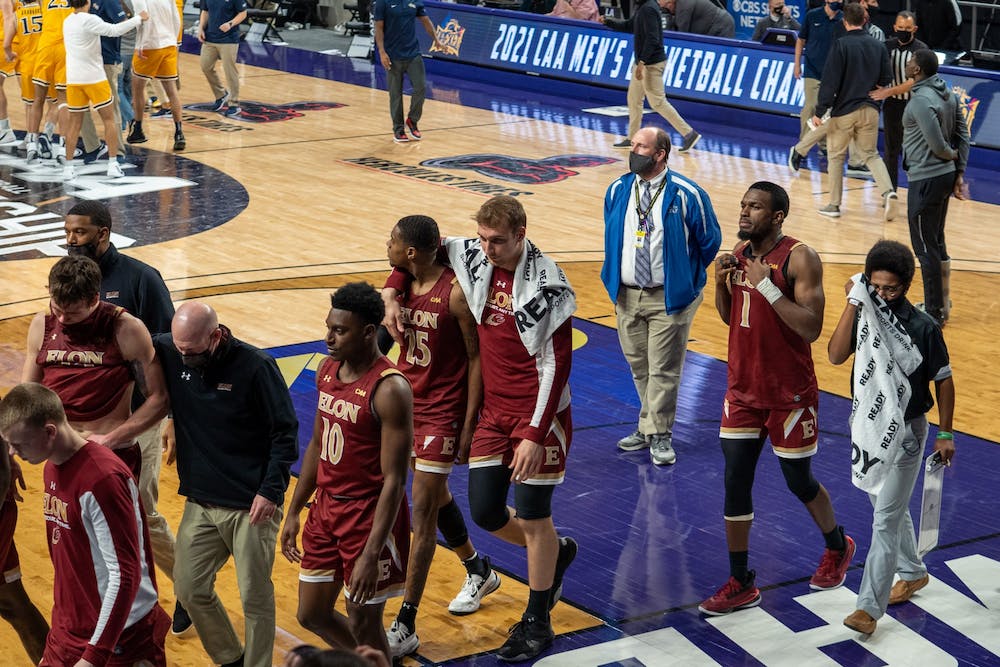 
The Elon men's basketball team after their 56-63 loss to Drexel in the CAA championship game.

Updated March 9, at 10:22 p.m. to include coverage of the postgame press conference.

The Elon men’s basketball season is over. Drexel University beat the Phoenix 63-56 in the Colonial Athletic Association championship, securing the Dragons a spot in the NCAA March Madness tournament.

This was the Phoenix’s first time ever advancing to the CAA championship game and the first time a no. 8 seed has advanced to the final.

Head coach Mike Schrage is in his second season with the team and said at the postgame press conference that no one believed they would make it to the conference championship, except everyone in the team’s locker room.

“I wanted them to cherish it, but they will be remembered for playing their best basketball in February and March. And that's what our program is going to be built on,” Schrage said.

In the first half, guard and graduate transfer Ikenna Ndugba led the Phoenix with a total of 8 points. Sophomore guard Hunter McIntosh started the game off strong for the Phoenix, scoring back to back four times for a 15-19 by the end of the first half.

Drexel guard Xavier Bell had 7 points in the first. Elon started off with a lead, but a lot of back and forth allowed Drexel to gain the lead for the first half. A 3-pointer with 10 seconds to the end of half by Drexel’s guard/forward Zach Walton put them up by 5.

The team started out strong in the first half, with seven points scored by McIntosh. However, McIntosh struggled in the second half with scoring opportunities, missing four three pointers in a row, ending with a 7-17 field goal record for the game.

McIntosh said that he does not place the blame on the amount of games that were played over the past few days.

“Four games in four days, so I'm not gonna say it didn't affect this, but that can't be an excuse for us,” McIntosh said.

In the second half, the Phoenix scored two more points than in the first half, but could not keep up with the Dragons. The Phoenix fouled a total of 9 times in the 2nd half.

Leading scorer for the Dragons was Mate Okros, scoring 14 points. Hunter McIntosh of the Phoenix scored the team high of 19 points and Ndugba followed close behind, with a total of 16.

Back in Elon, there was a watch party on Young Commons. Freshman Adam Patton attended and was happy to come out and support the team despite the loss.

“It was fun to come together as a community to support Elon,” Patton said. “And it's just nice in such crazy times as these that we're able to have something that we can all come together to kind of root for.”

Eleven games were cancelled for Elon this season due to positive COVID-19 cases amongst themselves and other teams, leading their regular season to an abrupt end Feb. 28.

“I know the CAA definitely had some struggles, with pauses and interruptions and stuff, but I mean, yeah, there's definitely challenges that come with it,” McIntosh said.“Our coaches, staffing, you know, a lot of players, we always try to keep a positive mindset.”

One of the games that was cancelled was against Drexel. This championship game was the first time the teams faced off this season.

Elon had a 7-7 record against Drexel, but now that has changed to 7-8.

Jacob Kisamore contributed to the reporting of this story.