Hundreds of students, faculty and staff walk through campus, calling out white supremacy 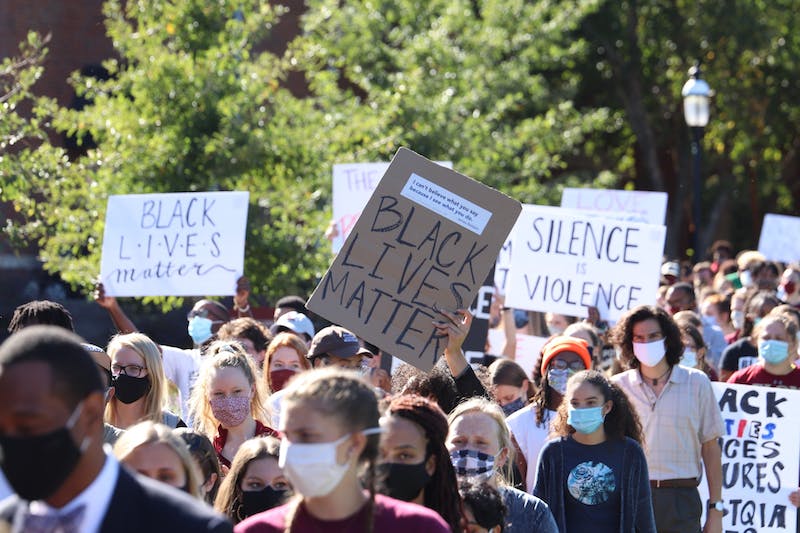 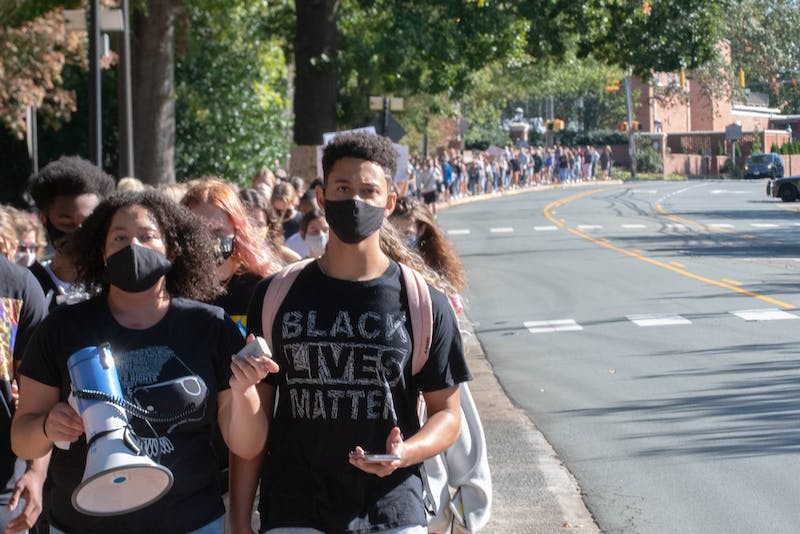 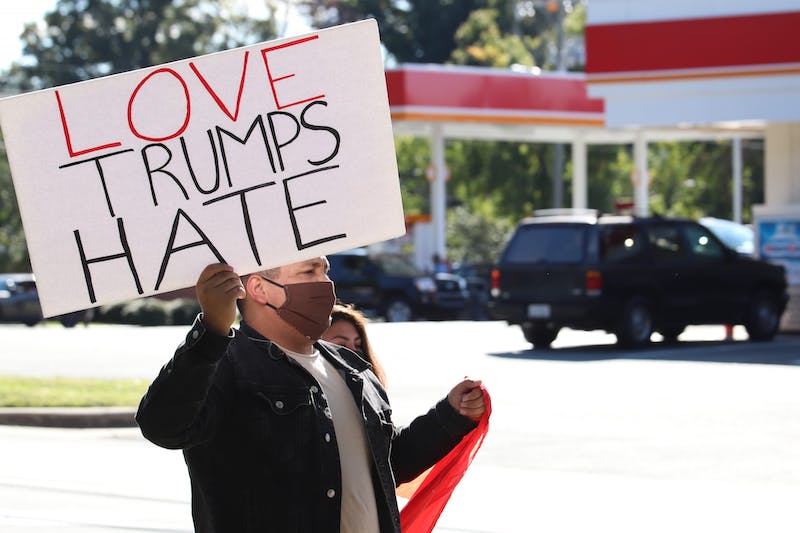 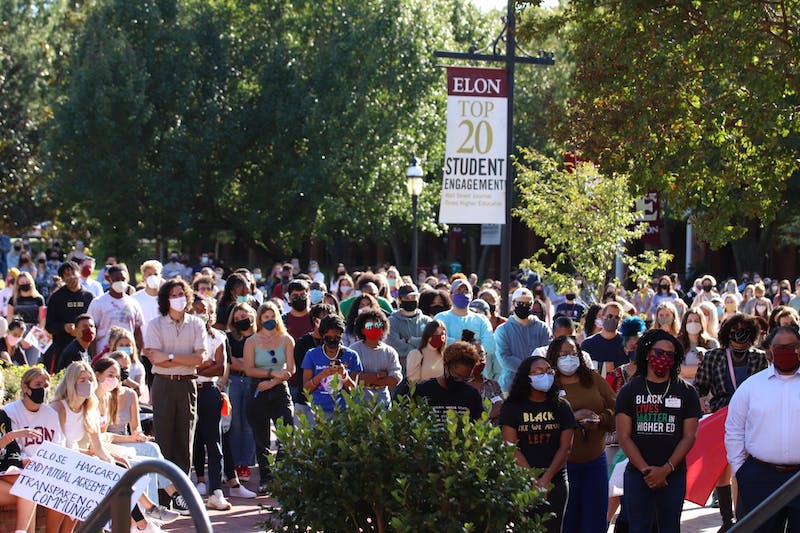 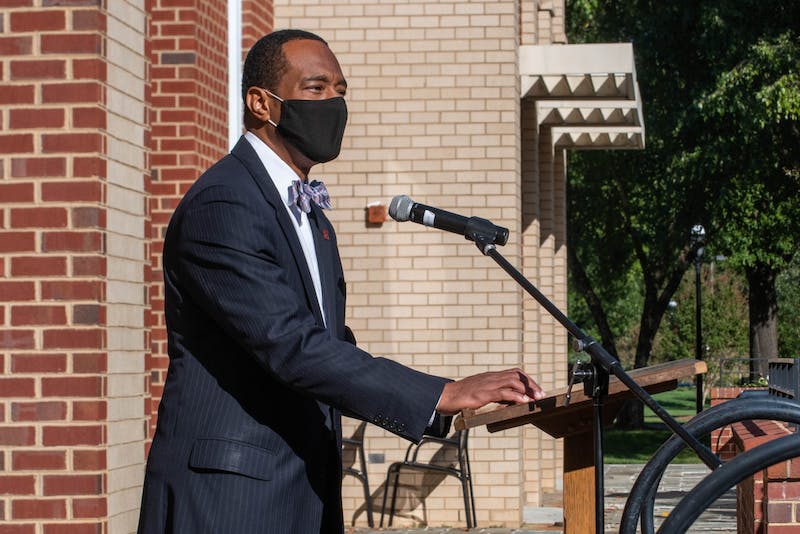 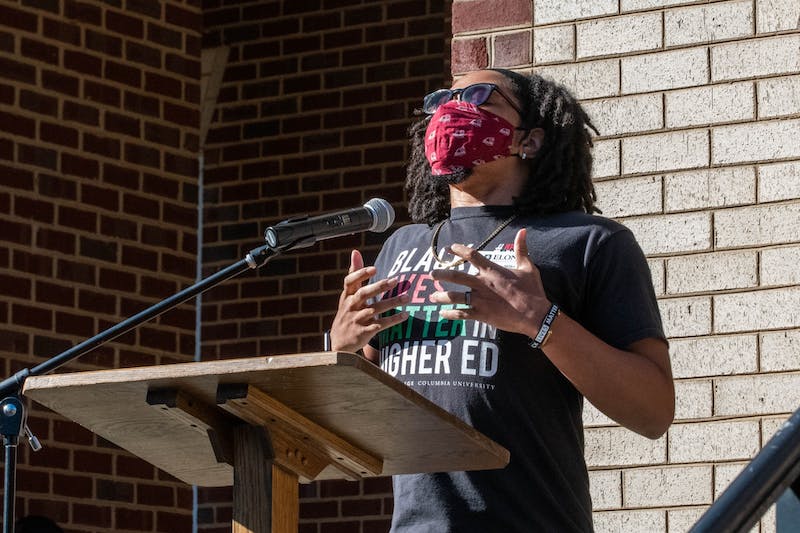 Updated Oct. 3 at 11:21 a.m. to include the demands the organizers want the university to meet.

Hundreds of Elon University students, faculty and staff participated in a protest and march through campus Friday. Students held signs that read “Black Lives Matter” and “Do better Elon.” Students also chanted in unison “Whose streets? Our streets!”; “Black lives matter”; and “No justice, no peace.”

The first to speak was one of the protest’s five organizers, junior Hana Hawthorne. Hawthorne said this protest was motivated by the convoy supporting President Donald Trump that drove through campus on Sept. 19. Individuals in the caravan of vehicles yelled slurs, profanities and statements such as “white power” at students, faculty and Elon community members. Some students have expressed concern for their safety after this convoy took place.

Hawthorne said the goal of the protest today was to, “take back our streets.”

Hawthorne led the group down East Haggard Avenue, around Lake Mary Nell and back through Global Neighborhood.

“When there are convoys in the area that potentially could put students in danger, specifically of the white supremacist variety,” Woodcook said.

Woodcook said they feel uncomfortable at a place that’s supposed to be their home.

“It's extremely violating, especially when it's like, this is my campus. Like I belong here,” Woodcook said.“I feel scared to just walk to my house.”

Another demand is to “improve communication and transparency” between the administration and the students. Woodcook said she would like to see this include an updated E-Alert system.

The organizers also demanded an updated E-Alert system. As President Connie Book said in an email to students this afternoon, an E-Alert system would require Elon University Police to notify students when a convoy comes through campus.

The third and final demand is for the university to strongly condemn racism and hate “anytime it comes up on campus.”

Among the organizers marching were other Elon students. Elon senior Taylor Jones said his desire for unity motivated him to show up Friday.

“I think it's a really divisive time right now,” he said. “And I think we have more power when we're together.”

Others in attendance were also hoping for unity. Book was invited to the march by the organizers. She said she is proud of Elon students.

“It’s great to see the community out and taking ownership of our campus and our values, right. And that we reject what happens in the behavior of the people who were inside of that convoy that behaved that way,” Book said.

Brooke Buffington, an Elon staff member who works at the Student Professional Development Center, joined the march with her 8-year-old daughter.  She said the convoy that drove through campus was “disgusting and upsetting.”

Buffington said bringing her daughter to the march today was a conscious decision.

“We've talked about what's going on in the world and it's an opportunity to put action behind our conversation today,” she said. “To understand our role, to make sure our voices are heard and that we're allies for people that aren't treated are treated well.”

A point of disagreement at the march was whether or not the administration responded appropriately and timely about the convoy.

In the opening remarks, one of the event organizers, junior Katie Grinnell, said from now on, she would like to see the university act, “swiftly and with strong condemnation” when instances of white supremacy arise.

President Book defended her timing on the release of her statement. She said, “It's not a hesitancy to call out racism or hate, you know, it's about how we use social media.”

Book said for more information on her statement, watch her fireside chat hosted by the Student Government Association.

Hawthorne said she has been pleased with the administration’s cooperation.

“I think they really are true to their word when it comes to, you know, trying to get stuff done,” Hawthorne said in an interview with Elon News Network.

She said she will continue to hold the administration accountable.

After the march, the crowd heard from different speakers.

John Robinson-Miller IV, assistant director of the Center for Race Ethnicity and Diversity Education, led the group in a series of deep breaths. He told the crowd that they were “too loved to hate.”

Vice President and Associate Provost for Inclusive Excellence Randy Williams spoke about owning his identity and how he is a role model for his family. He encouraged students to teach their friends their worth like he does with his daughters.

“What brought us together was hate but what will trump that is love,” Williams said.

He listed off the accomplishments of ancestors and historical civil rights leaders and said, “If they didn’t give up then, what gives us the right to give up now?”

When the crowd was marching down East Haggard Avenue, a man driving a black truck yelled, “White lives matter.” Otherwise, the march participants were left alone.