Some Elon University students want the university to do more for student safety after a caravan in support of President Trump drove through campus yelling profanities, slurs at community members 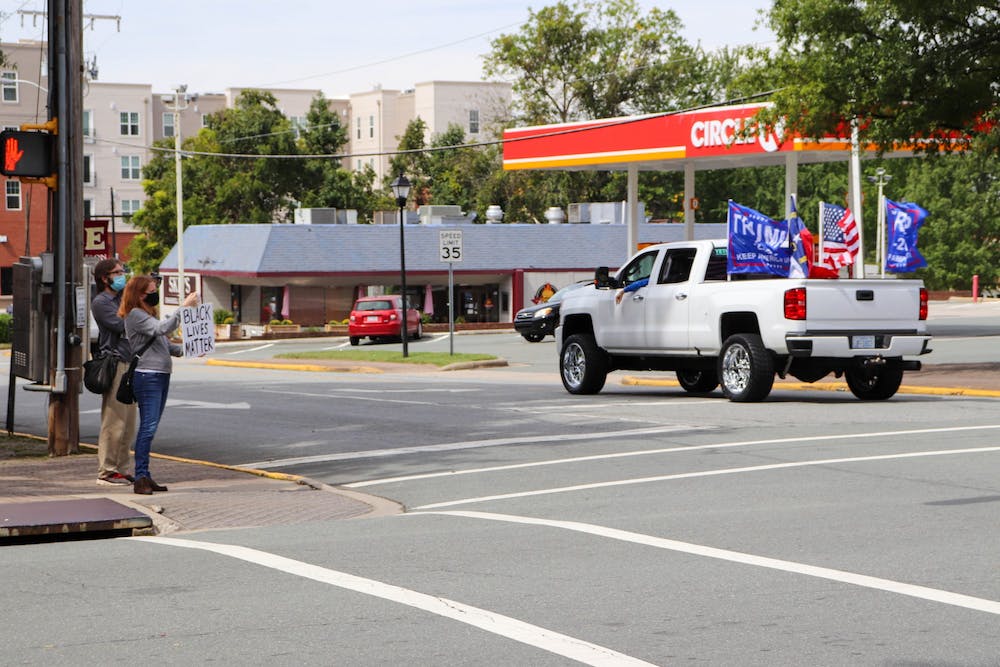 Senior Cameron Mullins said their mom is concerned about them going out past 6 p.m. Mullins’ mom fears for their safety after a convoy of vehicles in support of President Trump drove through campus — with one person yelling “white power” and others profanities. Mullins said they no longer feel safe coming to campus or going out in the surrounding city of Burlington.

“I actually haven't been on campus for a while. I've basically just transferred over to doing mostly online classes,” Mullins said. “I don't even really feel safe going into Burlington, like I'm absolutely dreading going to get groceries because I don't know if I can get back safely.”

On Wednesday, President Connie Book sent a video to Elon students, faculty, and staff addressing the convoy. Book said Elon administration was unsure whether or not the caravan would come through campus and it is not in the university’s practice to announce such events.

“We did not know whether this caravan would come to our campus,” Book said. “It is not our practice to announce potential events, and convoys aren’t new — think motorcycles and vintage car drives. But political convoys are newer to the landscape and being used around the country.”

Jon Dooley, vice president for student life, said in an email to students on behalf of Book that she would be issuing a no-trespass order for the vehicles who yelled profanities at pedestrians.

But, many students have expressed that the university should have warned community members that the convoy was going to be in the area.

Sophomore Trinity Battle, who is staying remote in her hometown this semester. Battle, who previously told Elon News Network she was staying home in protest of the lack of support being done by the university for Black students, is concerned for the safety of her friends and colleagues on campus.

“I was getting texts about it … and I'm very protective by nature so I was really upset and emotional about the fact that it was happening and I was not there to do anything about it,” Battle said.

Senior Alicia Powell, who is a member of Elon’s Black Student Union and works alongside Elon administration as a part of the President Student Leadership Advisory Council, said there is much more Elon can do to improve the safety of students on campus from events like the convoy.

“I do believe that we do more than the average private school and while I love Elon and am blessed to be an Odyssey Scholar and have the safe space of the [Center for Race, Ethnicity and Diversity Education], I think more still needs to be done,” Powell said.

Powell said the university itself should organize a Black lives matter event. In early September, students in the Black Student Union and the CREDE organized a Black solidarity event, but believes university officials should organize an event as well.

Some of Powell’s ideas included a vigil with the names of Black people who are victims of police brutality.  Powell also suggests that the university have more conversations with the wider Elon community and not just the Black students or students of color on the issues facing people of color.