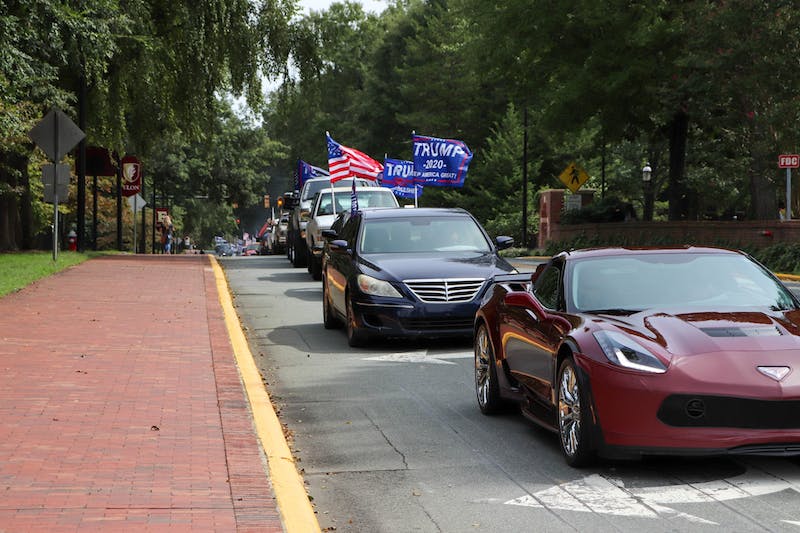 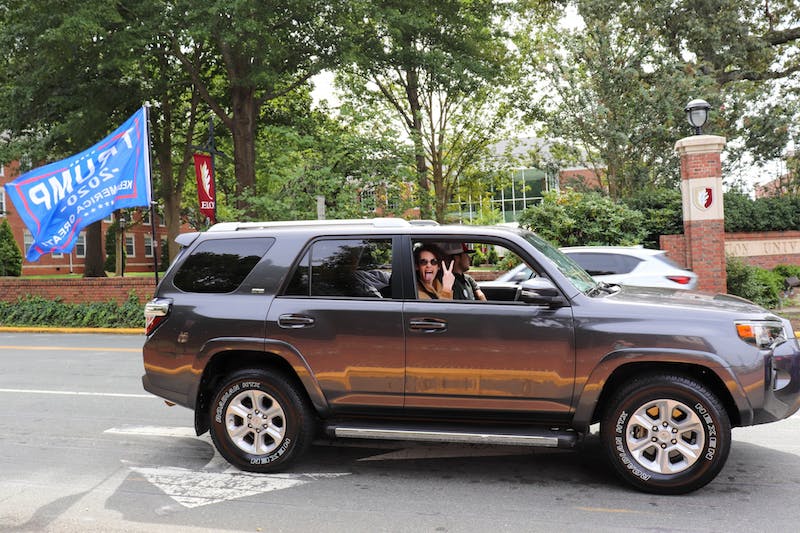 A parade of vehicles in support of President Donald Trump drove through Elon University's campus as part of a convoy organized by a member of Alamance County Taking Back Alamance County (ACTBAC), a group designated as a neo-Confederate organization by the Southern Poverty Law Center.

A parade of about 200 vehicles supporting President Donald Trump‘s re-election campaign attended a rally at ACE Speedway and drove through the Elon University campus Saturday.

Many of the vehicles carried Trump 2020 flags as they drove along East Haggard Avenue during a nearly two hour parade route.

The convoy was organized by Gary Williamson through a Facebook event. Williamson is a member of Alamance County Taking Back Alamance County, ACTBAC, a neo-Confederate group previously designated as such by Southern Poverty Law Center . The parade began at ACE Speedway with approximately two hours of speakers, according to the event. At about noon, the caravan began driving around Alamance County and drove through the campus of Elon University.

ACE Speedway gained national attention over the summer for failing to adhere to orders from Gov. Roy Cooper on mass gathering limitations.

After driving through campus, the parade continued on University Drive and to other parts of Alamance County including the Confederate monument in Graham.

Multiple students crossed Haggard Avenue several times in an attempt to disrupt the parade. They were later asked to stop by town of Elon Police because they were impeding traffic, according to Lt. Lyle Anibal.

Elon senior, Tyler Chavez was one of the students that were asked to stop crossing the street. He and other students did it as a way of making themselves heard.

“We presented ourselves just with our bodies, walking across the street. Just as the trucks have presented themselves with their banners and flags and horns,” Chavez said. “For me it was presenting myself as a member of the Hispanic community on campus and as a student that tries to fight against groups, advocating for white supremacists neo-nazis and fascists.”

Chavez calls for the university to do more to protect students from trucks harassing students and faculty. He also hopes they come out with a statement acknowledging the event.

“So far it has felt like they haven't been acting much, or even acknowledging what's been happening,” Chavez said.

Video posted to Twitter by Elon University Professor of Computer Science Megan Squire shows individuals in the parade making profanity-laced comments about her.

In an email to Elon students, faculty and staff on Sunday, Jon Dooley, vice president for student life, condemned the profanities, insults and slurs yelled at Elon community members.

In his email, Dooley said that President Book has asked for no-trespass orders to be issued to those caught on Elon's security cameras yelling hateful messages to "exhaust every legal option."

"No trespass orders also allow us to keep a record should we encounter issues in the future," Dooley wrote. "This is our standard procedure when individuals exhibit this kind of behavior."

At one point during the event, Squire was out on the sidewalk on East Haggard Avenue holding a Black lives matter sign. She said she wanted to let the parade know her thoughts on Trump "which is that Trump's terrible and Black lives matter."

Squire and her husband Anthony Crider, an Elon University professor of astrophysics, have been following the activity of ACTBAC and its members since Trump's election in 2016.

Crider who was at ACE Speedway during the start of the event said there were members of ACTBAC in attendance.

The caravan came a day after the death of Supreme Court Justice Ruth Bader Ginsberg who died at the age of 87 following a battle with cancer.

Trump now has a narrow window to try and appoint a new Supreme Court justice to fill the vacancy. Any appointment would have to be confirmed by the U.S. Senate.

Claire Schoenfeld contributed to this report.