Businessman, Elon University trustee and postmaster general Louis DeJoy's role leading the USPS has caused concern at Elon and across the nation 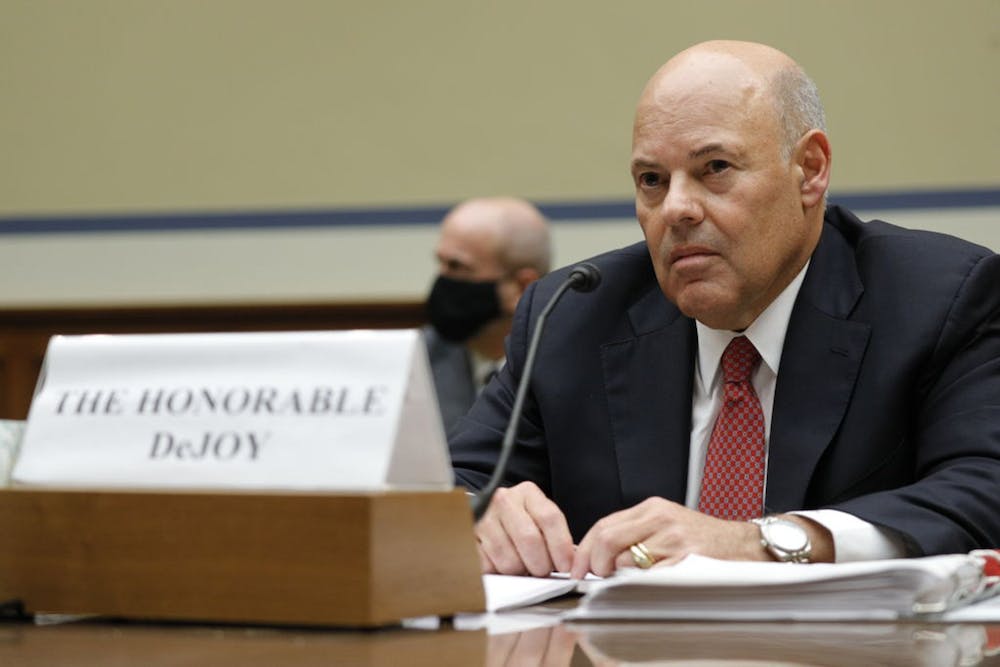 U.S. Postal Service Postmaster General Louis DeJoy testifies at a House Oversight and Reform Committee hearing in the Rayburn House Office Building on August 24, 2020 on Capitol Hill in Washington, DC. The committee is holding a hearing on "Protecting the Timely Delivery of Mail, Medicine, and Mail-in Ballots." (Tom Brenner/Pool/Getty Images/TNS)

Many people know him as postmaster general. Some know him as a successful businessman or the former CEO of New Breed Logistics. But members of the Elon community know Louis DeJoy as one of the benefactors for Odyssey scholarships, and as a member of the Elon University Board of Trustees since 2007.

DeJoy’s story as a leader reaches back decades. After graduating from Stetson University in Florida, DeJoy served as CEO of High Point-based New Breed Logistics from 1983 to 2014. DeJoy told the Greensboro News & Record in 2004 that he grew the company — founded by his father in 1968 — from a simple trucking company into a larger logistics operation with high-profile clients such as Boeing and Verizon Wireless.

Once DeJoy sold New Breed to Connecticut-based XPO Logistics in 2014, he transitioned to CEO of XPO’s North American supply chain until he became a member of the company’s board of directors, where he served until 2018.

"I guess I was an entrepreneur once, when I first started. The rest of my life was implementing and operating my plan, and that is where success comes."

Ten years after becoming a trustee, DeJoy was honored with Elon’s medal for entrepreneurial leadership in 2017 for his work with New Breed and XPO Logistics.

“I guess I was an entrepreneur once, when I first started,” DeJoy said in his acceptance speech. “The rest of my life was implementing and operating my plan, and that is where success comes.”

A year after receiving his honor from the university, DeJoy and his wife Aldona Wos established the DeJoy-Wos Odyssey Scholars Endowment meant for “highly motivated students from Title I schools in Guilford County,” according to Elon University.

After multiple requests for an interview, DeJoy was unavailable for comment before the publication of this story.

DeJoy stepped into the role as the country’s 75th postmaster and was selected by a unanimous vote by the United States Postal Service Board of Governors, according to a press release.

Since DeJoy took on the role postmaster general, the USPS has experienced slowdowns, a lack of overtime pay for workers and post office box removals. DeJoy refuted claims of the post office being unable to handle a surplus of mail-in ballots come November in a hearing on Aug. 21, but Democratic congressmen — and their constituents — are still not convinced.

In the Elon community, alumni, faculty and students have expressed their concerns regarding the university’s continued affiliation with DeJoy. In response to concerns brought forth to Lee Bush, chair of the academic council, Elon University President Connie Book asked community members to remember the contributions DeJoy has made to Elon as a whole.

"The board fully supports our community's belief that a free, fair and impartial election process is essential and forms the foundation of American democracy. Mr. DeJoy has said that he shares those values, and the board looks forward to hearing his upcoming testimony in Washington."

“The board fully supports our community’s belief that a free, fair and impartial election process is essential and forms the foundation of American democracy,” Book said. “Mr. DeJoy has said that he shares those values, and the board looks forward to hearing his upcoming testimony in Washington.”

Jeffery Clark, professor of mathematics at Elon, requested that Bush ask Book and Board of Trustees Chair Edmund Moriarty to make a clear statement regarding their position on the USPS and DeJoy. Clark said he had hoped the university would make a statement and stand with the USPS, and he was “disappointed” in the eventual response from Book, especially with the focus put on Elon specifically and the lack of problems with mail services on campus rather than the impact of the issue on the nation as a whole.

“I can’t tell you how disappointed I was for a fixation on ‘we’re okay, so I guess it’s not a problem,’” Clark said. “That just struck me so inappropriate and tone deaf certainly to the larger community."

Now, Clark will be making a motion in the Sept. 4 faculty meeting. There will be a vote to ask DeJoy to commit through “words and action” to improve the service provided to the nation by USPS, as well as to resolve any financial conflict of interest. Failing these actions, Clark said, DeJoy should leave his position as a trustee at Elon.

Though a vote of this nature is non-binding, Clark said he hopes if the motion passes and is publicized, other members of the community may “take a stand” separating the university from DeJoy’s actions as postmaster general.

“If he is not to be held accountable as a representative of Elon University at this high level then we as a community have no claim to teach university values in our classrooms,” Clark said. “Our students learn from our actions every bit as much as they learn from our words.”

Joanna Penick ‘03 began a petition for the removal of DeJoy in early August. The alum said in addition to his actions as postmaster general, DeJoy’s affiliation with Trump also contributed to her starting the petition.

“I googled DeJoy to see that he was also a Trump megadonor and it soon became apparent what Trump and DeJoy had planned for the post office in regards to their attack on mail-in voting and attempts to sway the 2020 election in Trump’s favor,” Penick said.

The petition, which received over 500 signatures in the first 24 hours, now has over 4,000 signatures.

After seeing Book’s response to the academic council, Penick said the university’s statement was disappointing but not surprising, and she has since begun distancing herself from the university. The response “left a lot to be desired,” and Penick said she wished the university had addressed alumni, students and staff, not just faculty.

When Book mentioned in her response that the people they had heard from “weren’t aware of how much DeJoy had done for the university,” Penick said she felt the comment was condescending towards those voicing their concerns.

“It’s not that we’re not aware. I’ve read the numbers, I know how much money he gave,” Penick said. “It’s just that I value, and the people signing the petition and the people calling for his removal value, democracy over donations, and it’s clear that Elon does not.”