Following changes made by Postmaster General and Elon Trustee Louis DeJoy, some in the Elon faculty and alumni call for action and the trustee’s removal 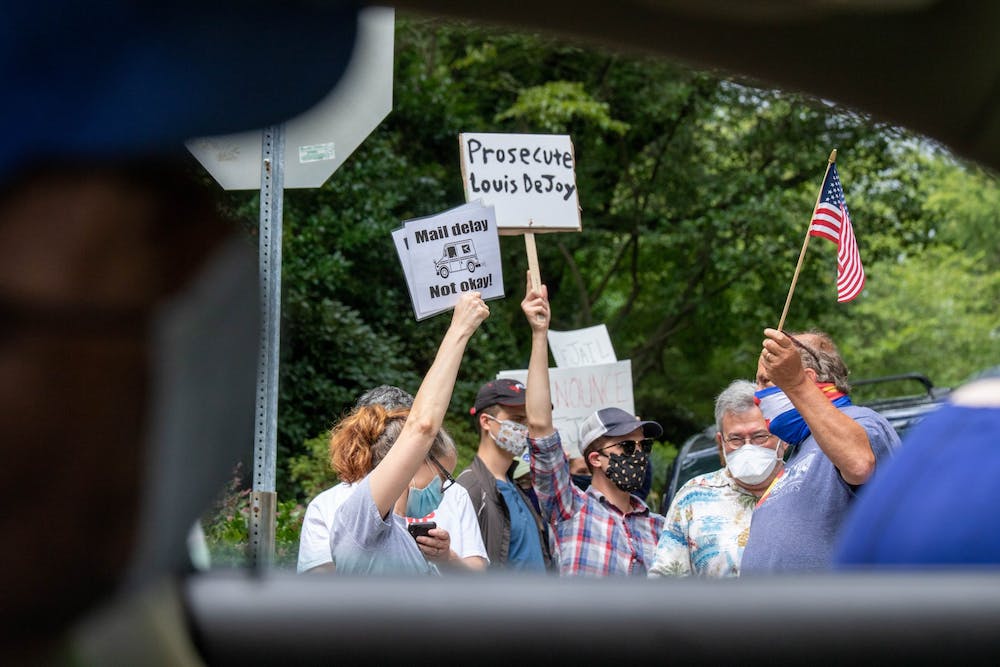 
Protestors hold signs on the corner of Country Club Road and Cleburne Street in Greensboro N.C. on Sunday, Aug. 16.

Elon University faculty and alumni are raising concerns over the actions of the Postmaster General Louis DeJoy and the threat these actions could pose to the presidential election in the coming months. DeJoy, who is also on the Board of Trustees at Elon University and has been since 2007, will now testify before the House Oversight Committee on Aug. 24. Since his appointment in May as the 75th postmaster general, DeJoy has overseen budget cuts and temporary slowdowns in postal operations, as well as the reorganization of leadership and the removal of mailboxes and mail sorting machines.

Jeff Clark, professor of mathematics, expressed concern over the recent changes with the USPS. Clark said while he does not think it is the university’s role to “attack” DeJoy, he does hope the university will make a statement standing with the USPS during a time when mail — specifically mail-in ballots during an election and a pandemic — will be relied upon more heavily. The risk of voting in-person as a result of a lack of confidence in mail-in ballots is contrary to the university’s “Ready and Resilient” philosophy, Clark said.

“I don't see where it's Elon's role to be attacking a specific trustee by name,” Clark said. “What I am pushing for, though, is that given the actions of our current postmaster general Elon should not silently acquiesce to them.”

Clark wrote faculty and staff in hopes of having a discussion, and has continued to email to keep the conversation going.

“I would prefer not to have to raise this issue, but as someone who loves their country, I do feel as if time is short to raise our voices publicly in support of the USPS and the work that it does supporting all of our citizenry,” Clark wrote in an email to faculty and staff. “As the current postmaster general is an Elon trustee, it is important that other Elon voices be heard in support of the USPS.”

In a press release on Aug. 18, DeJoy said that while there has been discussion about the post office’s ability to handle the challenges of the pandemic and the election, retail hours will not be changing, mail sorting machines and mailboxes will remain where they are, mail processing facilities will remain open, and overtime will be approved as needed.

“The Postal Service is ready today to handle whatever volume of election mail it receives this fall,” DeJoy said in the release. “Even with the challenges of keeping our employees and customers safe and healthy as they operate amid a pandemic, we will deliver the nation’s election mail on time and within our well-established service standards.”

Professor of sociology Thomas Arcaro said he would also like to see the university make a statement regarding the actions taken with the USPS. Arcaro said while he recognizes the inefficiency of the USPS and the competition it faces with other shipping services such as Amazon and FedEx may be reasons to call for reorganization, the timing of the changes and the “brazen attempt to handicap the postal service” is what Acaro finds problematic.

“This is affecting people on the margins. This is an inclusion and equity issue,” Arcaro said. “In this age of coronavirus, hindering people's ability to vote remotely, vote by mail, is just astoundingly tone deaf to the current crisis, and I think overtly politically manipulated.”

“The thought that even one student … would have their vote not be counted, it horrifies me,” Clark said. “It's hard on several levels for what I'm asking for Elon, it's leadership, to do the right thing, but if our values only matter in the good times, are they really values?”

Alumni on social media have called for a stop to donations to the university, as well as alerting the office of alumni engagement to their concerns. Alumnus Rob Shapiro drafted a form letter to send to alumni engagement that has since been circulated on Twitter. Shapiro said in an email that he is “heartbroken” that the university has remained silent on DeJoy.

“I love Elon and want it to live up to the values it instills in its students. The administration has a responsibility to fight for justice — to stand with its students, faculty and community members who strive toward a more equitable world,” Shapiro wrote. “I hope Elon’s administration wakes up, removes DeJoy from its Board of Trustees, and prioritizes its support for a fair and free democracy over any individual’s money or influence.”

In addition to taking to social media, alumnus Joanna Penick ’03 started a petition on change.org, calling for DeJoy’s removal from the Board of Trustees. Penick said while she has signed many petitions, this is the first petition she has created herself and she did not know what to expect. In less than 24 hours, the petition had gained 500 signatures, according to Penick.

After hearing about DeJoy’s “Friday Night Massacre,” Penick found out from another alumnus that DeJoy was on the Board of Trustees. The attack on USPS was personal for Penick, as her father returned from eleven consecutive months of combat in the Vietnam war to work the rest of his career with the USPS, a job Penick said that paid for her four years at Elon.

Penick said the “only acceptable outcome” in her opinion is for removal of DeJoy from the Board of Trustees and for Elon to no longer associate with DeJoy.

“I work for a university, and I do understand the often-times nuanced relationship between donors and the institutions they support, and I also understand the strange and terrible predicament that covid-19 has left universities in financially,” Penick wrote. “But Elon cannot align themselves with the all out attack on democracy that DeJoy and Trump have been launching over the last few weeks.”