Tribute to Jeanne and Jerry Robertson to be held Sept. 29

The two longtime Elon leaders, donors both died in 2021 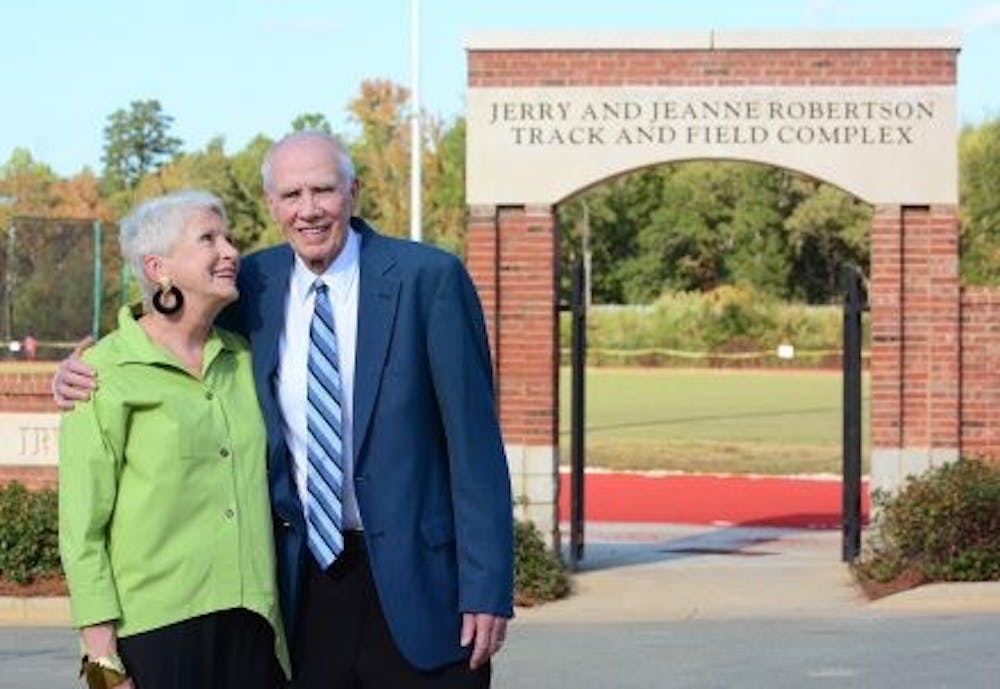 Jerry and Jeanne Robertson made a gift in 2014 to renovate Elon’s track and field complex. Photo courtesy of Elon University.

The Elon University community is gathering tonight to honor longtime university leaders and donors Jerry and Jeanne Robertson, who died in June and August 2021, respectively.

Director of Presidential Stewardship Lizzie Hill helped coordinate the event and said the tribute was put off due to the prevalence of COVID-19 when the couple died. She said about 200 people are registered to attend the tribute.

“We haven't been able to remember them the way that we wanted until now,” Hill said.

Tonight’s program will feature remarks from Elon President Connie Book, Director of Athletics Dave Blank and six local humorists and friends who were mentored and influenced by Jeanne’s humor. Closing remarks will come from the Robertsons’ niece Jeanne Anderson.

The performers include Tara Brown, Debbie Childers, LaDonna Gatlin, Patrick Henry, Jane Herlong and Al McCree. Hill said the event was Henry’s “brainchild” and all members of the Elon community are welcome to attend.

The Robertsons received the Elon Medallion, the university’s highest honor, in 2017 as recognition for their service to the university and special contributions to Elon Athletics.

In 2003, Jeanne was elected to the Elon University Board of Trustees. She was a nationally-renowned public speaker, humorist and former Miss North Carolina. Jerry was an educator and principal in the Alamance County School System.

“Jeanne and Jerry Robertson loved supporting Elon University and celebrated its success,” wrote Henry. “Jeanne never performed a show where she didn’t mention Elon in a story. They believed in education and were true ambassadors for the Phoenix.”

The tribute is set to begin at 7:30 p.m. on Sept. 29 in Whitley Auditorium. Doors open at 7 p.m. Pre-registration is encouraged but not required.