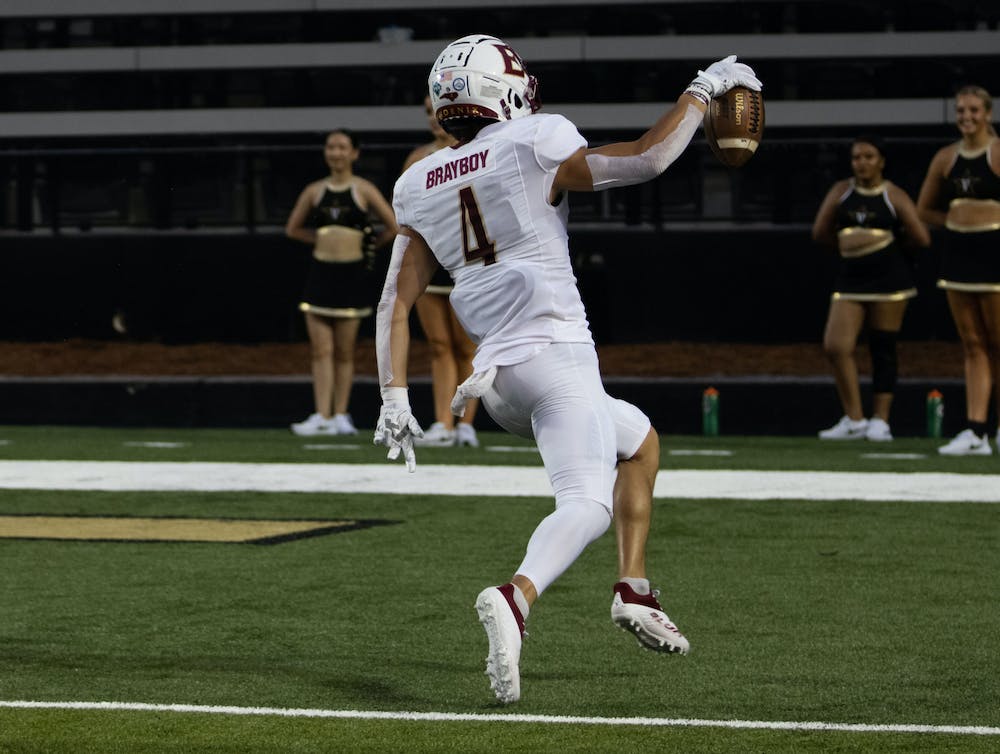 Nashville, Tenn. – After a storm delayed the start of the game, the Elon University football team kicked off its 2022-23 season against the Vanderbilt University Commodores at FirstBank Stadium. The Phoenix lost 42-31 in a tight battle.

The long awaited question of who would start the game at quarterback for Elon was finally answered when redshirt senior Matthew McKay lined up in the backfield. McKay and junior Joey Baughman split the minutes in the first half until an injury to Baughman toward the end of the second quarter caused him to be carted off the field. Head coach Tony Trisciani said that the team will find out more this week on Baughmans injury.

“We’ll really have a good idea when we get back and get some imaging on Joey, and have a better idea next week.” Trisciani said. “It’s tough to tell right now.”

Vanderbilt came out early with a 21-0 lead in the first quarter. Elon answered on the next drive with a 75-yard touchdown pass from McKay to redshirt junior wide receiver Chandler Brayboy. After a 48-yard field goal from senior kicker Skyler Davis made the score 21-10, Vanderbilt ended the half with a touchdown to take a 28-10 halftime lead.

The injury to Baughman did not slow Elon down as the Phoenix stormed into the second half with two touchdowns to match Vanderbilt’s one. With Vanderbilt ahead 35-24 in the fourth quarter, Elon had a chance to cut the lead to single digits until senior wide receiver Jackson Parham fumbled the ball to give it back to Vanderbilt. The Commodores capitalized on that turnover and turned it into a touchdown to make the score 42-24.

Elon scored one more time with a McKay rushing touchdown to make the score 42-31. The Phoenix did not score for the rest of the game, even after a successful onside kick late in the fourth quarter.

McKay finished with 333 yards passing and 52 yards rushing with four total touchdowns. He said his performance and the team’s performance could have been better in the first half.

“I feel like I could’ve started better. As an offense, we need to hone in on the little details,” McKay said. “I feel like it was just there for us.”

Junior defensive back Tre’von Jones finished the game with two tackles, a pass breakup and 71 punt return yards. He said there were plays that he wishes he had back but will review the film from the game to make adjustments for next week.

“I do wish I could get that first play in the first half back. Other than that I feel I did a pretty solid job always some little tweaks that we can fix after we hit the film room,” Jones said.

Elon will travel to Spartanburg, South Carolina next Saturday to take on Wofford at 6 p.m. The last time these two teams met was last season, when Wofford won 24-22 in a nail-biting game. Jones said that the team is motivated to avenge the loss.

“We’ve got a lot of juice that we’re gonna take into next week. Wofford, they got us last year, so we’re definitely looking to handle business next Saturday,” Jones said.