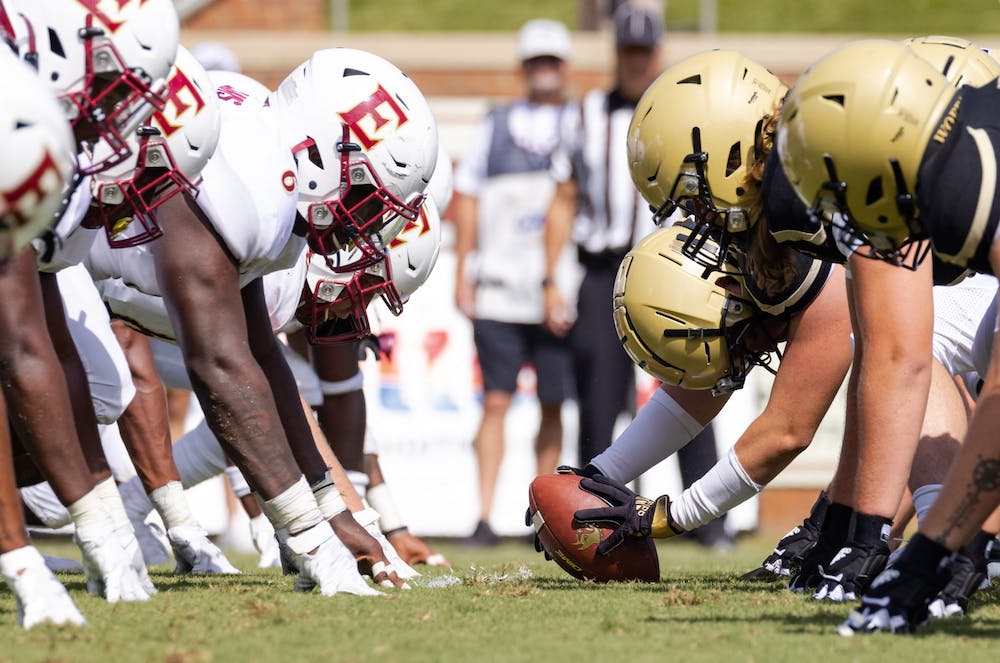 
The Phoenix came up 46-yards short of a win after a missed field goal with eight seconds remaining, falling to the Terriers 22-24 on Sept. 4, 2021.

The full football atmosphere of tailgating and fans in the stands was back at Rhodes Stadium celebrating the inaugural game of the 2021 season and the 20th anniversary of the stadium's opening. The fans roared when the theme of T.I.’s iconic “Bring Em Out” played as the Phoenix made their way onto the field.

Unfortunately for the Elon crowd, the Phoenix came up 46-yards short of a win after a missed field goal with eight seconds remaining, falling to the Terriers 22-24.

For the first time since 2019, Davis Cheek returned to the field as the starting quarterback for the Phoenix. The senior returned to his old form, throwing for 312 yards and two touchdowns to go along with 43 yards on the ground.

“For a guy that hasn’t played football as long as Davis has, he played a good game today,” Head Coach Tony Trisciani said. “I know Davis, I know there’s plays he wants back and he’s going to watch the film. No one is going to be harder on Davis than himself. I look forward to seeing him come back after this.”

“Once we came in, we realized we set the tempo for the game,” Chandler said. “We set the tone and unfortunately we ended up short, but it was good seeing that from the guys, there’s nothing like seeing us rally like that.”

Offensively, Cheek was able to hit redshirt freshman Chandler Brayboy for a career-high eight receptions and 112 yards, junior Jackson Parham 7 times for 99 yards, and senior Kortez Weeks 6 times for 68 yards. The ground game was relatively quiet with junior running back Jaylan Thomas only rushing for 56 yards on 13 attempts.

“They’re talented guys, extremely talented,” Cheek said. “Chandler and Jackson, those guys, they come to work every single day and I can’t speak highly enough about them specifically. They’re fantastic humans and even better football players, and the thing is that translates to what you see out here and on the stat sheets.”

Elon got the scoring started on their second drive of the game ending an 11 play, 71-yard drive with a 39-yard field goal by junior kicker Skyler Davis. The drive featured four third-down conversions, the second on a 16-yard completion to Parham on third and 16 to keep the drive alive.

On their first drive of the second-quarter, Wofford found the endzone when sophomore running back Irvin Mulligan took the handoff, bounced it outside, and raced down the left sideline untouched for a 65-yard score.

Elon was finally able to respond two possessions later on a drive that began with a career-long 37-yard scramble by Cheek, followed by a 20-yard pass to Weeks, who forced his way into the endzone to push the score to 10-7.

On the first play of the next drive, Wofford’s offense kept rolling with a 71-yard catch and run by senior tight end Landon Parker. From there, sophomore running back Ryan Ingram was able to punch it in on his third effort for a touchdown.

The Terriers continued their assault after the ball went through the hands of redshirt sophomore wide receiver Jordan Bonner, leading straight to an Amir Annoor interception. With the short field, it only took Wofford two plays to get back into the endzone on a two-yard run by fullback Nathan Walker.

After a long drive that included a 31-yard pass to Parham, Davis nailed a 41-yard field goal to make the score 13-21 going into the half.

The Phoenix took the lead late in the third quarter when a poised Cheek stood strong in the pocket, processed through his reads, executed a beautiful pump fake and hit Brayboy running free down the middle of the field in the back of the endzone with a strike for a 37-yard touchdown.

But, Wofford answered with a 26-yard field goal by junior kicker Walker Gliarmis with 10:15 remaining, capping off a 14 play drive that ate up over 7 minutes of clock, pushing the margin to 24-22.

Elon’s offense struggled to get anything rolling during their next two drives and all seemed lost when the unit turned the ball over on downs with 2:01 remaining. Needing to make a play defensively, junior defensive back Cole Coleman stepped up, forcing a fumble on the one-yard line, leading to an Elon touchback.

With the ball back in his hands, Cheek began to drive down the field with no timeouts, hitting 14, 15, and 13-yard shots on the sidelines to junior Bryson Daughtry and Brayboy. With eight seconds left on the clock, Elon called upon Davis, who previously was 3/3 on the day, to attempt a 46-yard game winner. Wofford ultimately tipped the kick and it fell 10 yards shy of the uprights, giving the Terriers the win.