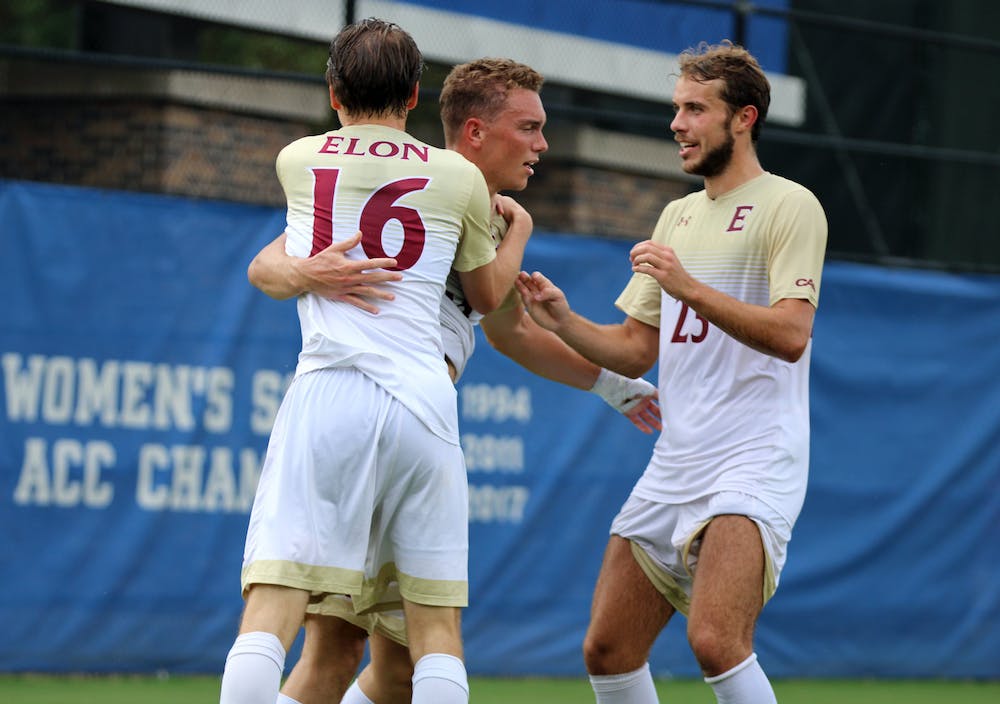 
Senior forward Mason Duval celebrates with his teammates after scoring his first career goal for the Elon University men’s soccer team against the University of San Diego at Koskinen Stadium in Durham on Aug. 28. Elon won 3-0.

DURHAM, N.C. – A trio of second-half goals propelled the Elon University men’s soccer team to a 3-0 win against the University of San Diego Toreros, as the Phoenix improved to 2-0-0 on the season.

Neither team scored in a defensive first half, but senior forward Mason Duval converted the game’s first tally on a pass from senior defender Jannik Videbaek in the 58th minute to put Elon ahead 1-0.

“One of their center backs went off to one of our midfielders, and I saw the run and it was wide open,” Duval said. “Me and Jannik made eye contact, and he knew where to put the ball.”

Duval celebrated the first goal of his Elon career with a front flip before his teammates surrounded him.

“I try and think I can do flips, but I underestimated how tired I was,” Duval said. “I just kind of had to swing my whole body to try and get over so I didn’t make a fool of myself.”

Nearly 20 minutes after Duval’s goal, freshman midfielder Majaliwa Msabaha scored his first career goal off a deflection to give the Phoenix a 2-0 lead. With 10 seconds remaining in the game in hand, sophomore midfielder Ryan Manna headed a pass into the net to make the score 3-0.

After a first half with few scoring chances for either side, head coach Marc Reeves stressed to his team at halftime how crucial it would be to score the first goal.

“We knew the first goal was going to be important,” Reeves said. “After that first one, it was really pleasing the way we defended but still created great chances. The second and third goals were phenomenal.”

Duval said Elon began to take over the game at the 10-minute mark of the second half, as the team saw that they were more physically fit than San Diego. After Duval scored his goal, he expected there would be more chances for Elon to attack.

“That was when I knew they were going to start pushing and that we were going to have more opportunities in transition, which is exactly what happened with our last two goals,” Duval said.

Reeves said the 90 degree heat and beating sun presented a significant challenge, but he was pleased with the recovery effort from his players following Friday night’s victory and also credited Elon’s depth in beating the heat.

“For the coaches, it’s hot. I can’t even imagine when guys are playing and the turnaround is tight,” Reeves said. “I’ll give our group a lot of credit because they did everything right.”

Though Elon felt good about its preparation and recovery for today’s game, Duval said it was still taxing physically.

“We thought we could prepare for it in the preseason, but there’s nothing like playing an actual game in the 12 o’clock heat,” Duval said.

Despite being outshot in both of its first two matches this season, Elon is yet to concede a goal through its first 180 minutes of game time. Reeves said he is happy with how the Phoenix has defended in the first two games while also not playing too conservatively.

Elon will play its first Colonial Athletic Association match and first home contest of the season on Sept. 3 against Northeastern University in a rematch of last year’s CAA Tournament semifinal, which Elon won. The match at Rudd Field will begin at 7 p.m.

“We’ll regroup this week and enjoy the two wins, but then we’ll spend another week preparing to be on point to defend Rudd and start off in the right way, which is three points,” Reeves said.