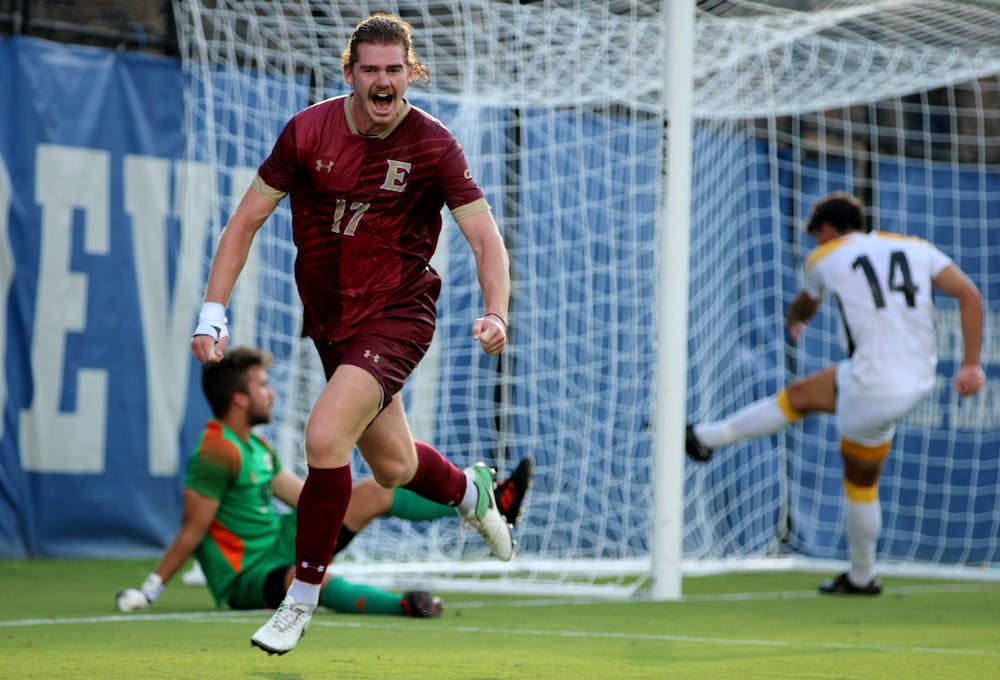 DURHAM, N.C. – For the second straight season, sophomore midfielder Scott Vatne scored a crucial goal for the Elon University men’s soccer team in its first regular season game, as a successful header in the 25th minute proved to be the game-winning tally in Elon’s 2-0 victory against the University of Wisconsin-Milwaukee Panthers.

Vatne received a cross from the left foot of senior defender Kasper Lehm and headed the ball into the net for Elon’s first goal of the season. Though he finished the play with a goal, Vatne credited Lehm’s cross-crease pass.

“I saw I was wide open on the back post,” Vatne said. “It basically hit my head, I didn’t really do much. I closed my eyes, hoped for the best and it went in.”

Vatne scored three goals last season as a freshman and earned a spot on the Colonial Athletic Association’s All Rookie-Team. Head coach Marc Reeves said he is impressed with how Vatne has improved this preseason and is excited to see what he can do in an expanded role this year.

“He’s concentrating more, he’s got a great temperament. He loves to play and he’s got a smile on his face most of the time,” Reeves said. “He’s got real quality. His heading is probably the weakest part of his game but it was a great goal and I thought he played well the rest of the time as well.”

After leading 1-0 at halftime, graduate student defender Michael Clow scored Elon’s second goal of the game in the 56th minute on assists from seniors Vemund Hole Vik and Jeppe Jordoson.

Clow is in his first season at Elon after spending two seasons with the University of New Hampshire and last season with East Tennessee State University. This was Clow’s first goal of his college career.

“I wanted to come here and make an impact early,” Clow said. “It feels really good to come here in my first game and get a goal.”

Elon added four graduate transfers this season, including starting goalie Ryan Bilichuk, who spent the last four seasons at the University of South Carolina. Bilichuk made three saves in his Elon debut to earn a shutout.

“He showed good composure,” Reeves said. “I’m really pleased he got a clean sheet because he let in some goals in the preseason but he’s adjusting.”

Despite being outshot by Milwaukee 11-7, Reeves said he was pleased with how Elon possessed the ball throughout the game and liked the scoring opportunities the Phoenix generated.

“We had some really nice sequences where we kept the ball for a fair amount of time and moved it into good areas,” Reeves said. “It’s a great win because they are a good team and we played pretty well. We were able to score a pair of fantastic goals and then hang in there at the end, which is what you need to get results on a neutral site and on opening day with the heat.”

Elon returns to Durham on Sunday for another neutral-site game against the University of San Diego. The game is scheduled to begin at noon.

Reeves said recovery will be crucial leading into Sunday’s game, as the team will have just one full day to rest.

“We’ve just got to tidy a few things up and have a similar type of gritty performance because it is on short turnaround,” Reeves said.